For all the talk of politicians, Clare Farrell suggests there is still a ‘leadership crisis’ over climate change (Picture: Getty Images)

A co-founder of Extinction Rebellion has suggested the Royal Family are sending a stronger message about the climate crisis than most politicians.

The environmentalist protest group has been out in force in Glasgow this week as the world’s leaders gather for the COP26 UN summit in Glasgow.

Boris Johnson compared humanity’s situation to being ‘5-1 down’ in a football match, as he urged nations to cut carbon emissions and deforestation.

The Prime Minister said he felt ‘cautiously optimistic’ about the world’s progress, but Extinction Rebellion’s leader said the government faces a ‘leadership crisis’ on the issue.

Clare Farrell welcomed recent comments from members of the Royal Family, suggesting they have better grasp on the issue than our elected representatives.

She told Metro.co.uk: ‘We need everybody really who’s concerned about this to come out in support and to show those leaders that we’re serious about what we want because they’re not acting like it’s serious.

‘Actually civil society has to come out and say “we’re serious about demanding this.” It’s interesting, I guess, to see a civil society and the royal family all advocating for action.

Sorry, this video isn’t available yet. 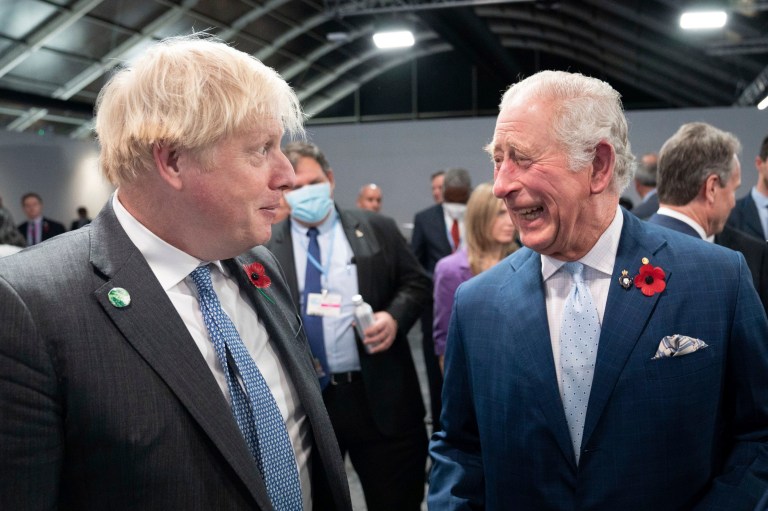 Prince Charles has called for world leaders and the business world to ‘systematically engage’ with each other (Picture: AP)

‘Government and most of the politicians seem completely incapable of getting their head around the fact that this is what’s required of them. You know, we’re in a total leadership crisis, basically.

‘I’m all for the unlikely alliances that can come through crisis, you know, whatever helps, basically.’

Opening up the COP26 summit, Prince Charles urged world leaders to team up with businesses to ‘systematically engage’ with the climate crisis.

He said it will take ‘trillions’ of dollars and that the governments must ‘marshal the strength of the global private sector’, particularly for less developed countries that simply cannot afford to ‘go green’. 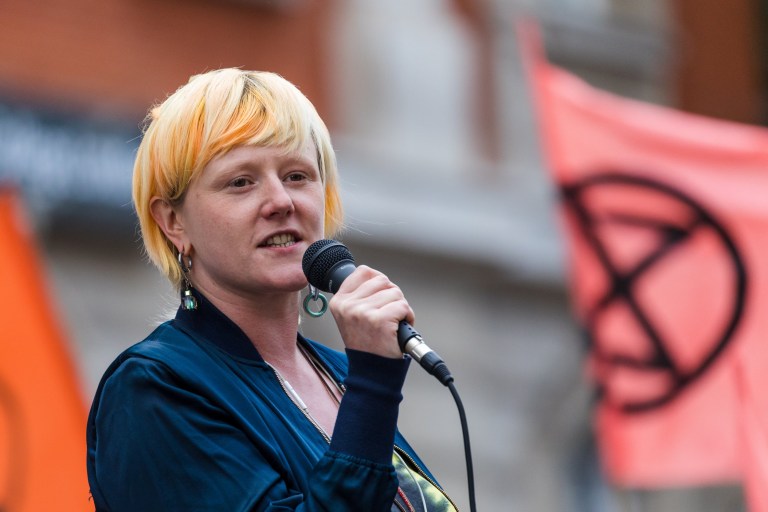 It’s a ten-year initiative that will reward five projects a year, each aiming to solve a distinct environmental problem.

In a video message for the summit, the Queen urged leaders to act ‘for our children and our children’s children’ and to ‘rise above the politics of the moment’.

The 95-year-old monarch added that she took ‘great pride’ in her late husband Prince Philip’s passion for environmental issues.

In that spirit, Ms Farrell said just talking alone is not going to be enough to save the planet from destruction.

While Extinction Rebellion’s tactics of non-violent public disruption are controversial and a subject of ire among politicians, she says the group actually has plenty of support among the public. 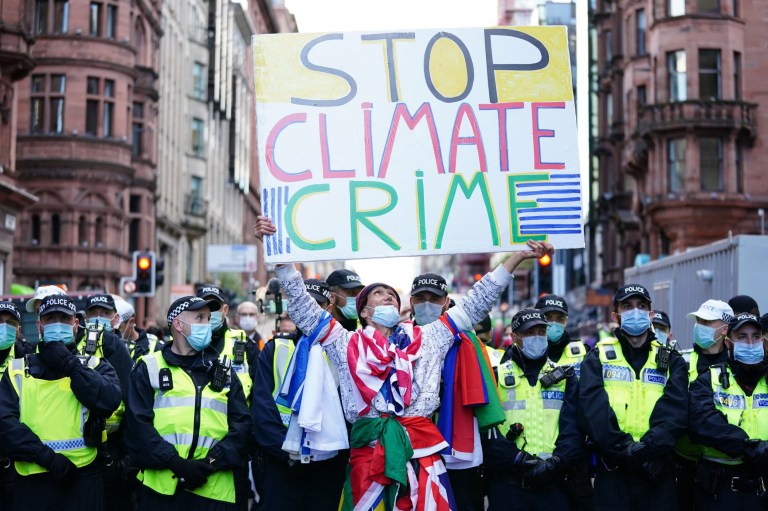 Climate protesters were in full force in Glasgow this week demanding tougher action on the climate crisis (Picture: PA) 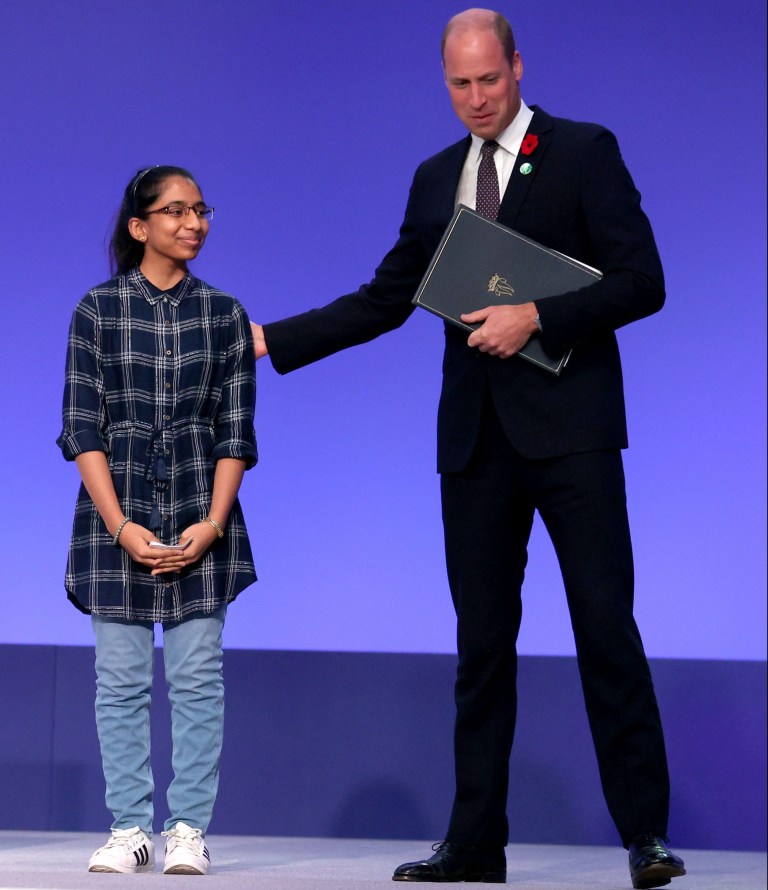 She added: ‘It’s obvious that disruptive protest does work and we’ve learned that from the history books. We didn’t make up all of these tactics.

‘We’ve got one of the highest levels of demand in public surveys for very serious action on climate in this country despite what I would say is a challenging – to say it politely – media environment that we have to work with, and the UK being the home to quite a lot of climate denial and misinformation campaigns.

‘So I think the tactics are successful in some respects, but I think we need a much bigger, broader, stronger movement than we’ve been able to build on our own. You know, Extinction Rebellion can’t do this on our own.’

Ms Farrell said Extinction Rebellion has always had a ‘blue lights policy’, meaning it will move out of the way for ambulances during its activists blockades of busy roads.

It comes after Insulate Britain – an offshoot group – came under fire over reports it held up emergency services during its sit-down protests.

‘I think it’s very clear that you don’t get your message across unless you make a bit of a fuss, so to speak,’ Ms Farrell said.

‘That’s actually part of your human rights is that you have the freedom of expression.

‘So you get the right not only to say what you think, but to choose the way in which you make yourself heard.

‘It’s no use if you’re allowed to protest over there in the corner, but very quietly and nobody really notices, right?’

She said limiting such freedoms are a huge concern among people opposing the proposed Police, Crime Sentencing and Courts Bill – which is currently being scrutinised by the House of Lords. 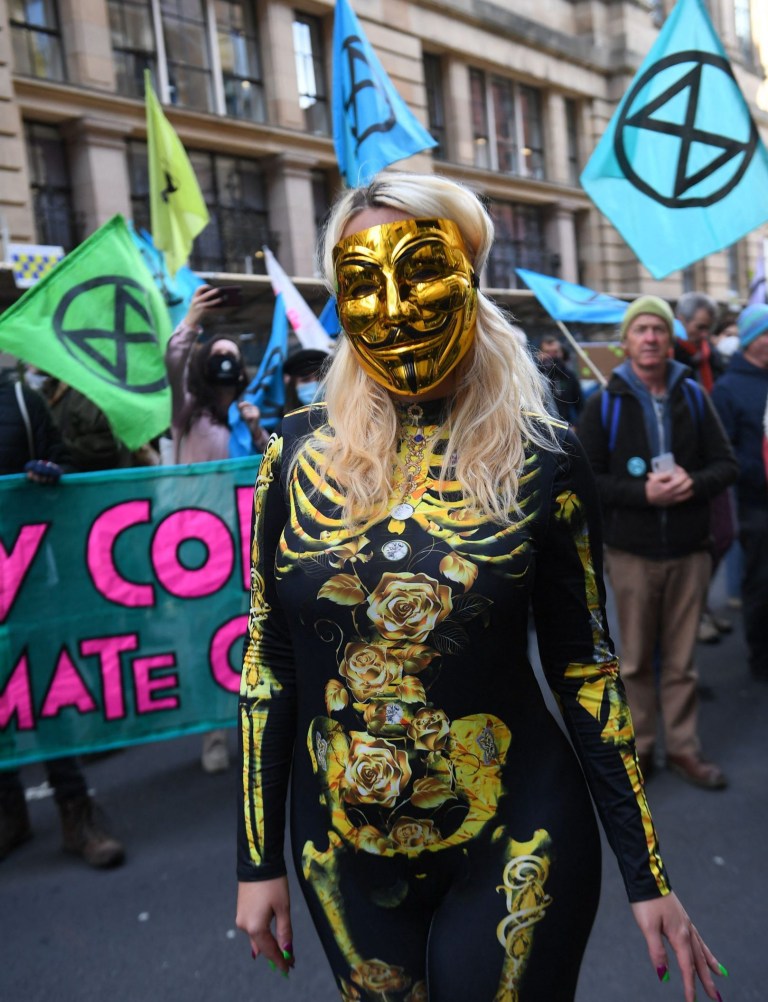 People’s right to protest against government inaction on climate change could be damaged by the Police, Crime Sentencing and Courts Bill, activists fear (Picture: AFP/Getty Images)

The legislation aims to make the streets safer, but many fear it will give authorities excessive power to prevent peaceful demonstrations.

Ms Farrell added: ‘I think there’s a lot of concern about how that meets international human rights, and there needs to be a big conversation in the public space.

‘I think about retaining them, not least for the fact that we’re in this horrendous situation and we’re being told by our leaders, but also because of young people.

‘We know from studies that the ability to have agency and a voice has a direct relationship with people’s mental wellbeing.

‘We know that there is a youth mental health crisis, which is growing massively. We know that eco-anxiety is very, very high at the moment and it’s not going to get any better until people see meaningful action.

‘And so increasingly the problems with youth mental health are being related directly to government inaction.’