XR are back on the streets of the capital (Picture: PA/Shutterstock)

Dozens of activists were arrested as they demanded an end to the use of fossil fuels on the second day of major protests in the city.

They are returning to London for a full week of action which threatens to grind parts of the capital to a halt.

Earlier, both Lambeth and Vauxhall bridges were ‘occupied’ by demonstrators who prevented traffic from crossing – though emergency service vehicles were allowed to pass.

Crowds sat in the middle of the road, waving flags showing the group’s ‘extinction’ symbol and holding placards that read ‘there is no planet B’ and ‘we want to live’.

But amid the sunny weather and with speakers playing music, police began clearing both bridges after several hours. They said 38 arrests were made in the process.

It is the latest in a series of XR protests over a number of years to cause significant inconvenience to Londoners – but activists say the scale of the climate crisis justifies their actions.

But, as has been the case at previous events, police told protesters there was evidence that they were causing ‘serious disruption’ to the public – and warned them to leave or face arrest. 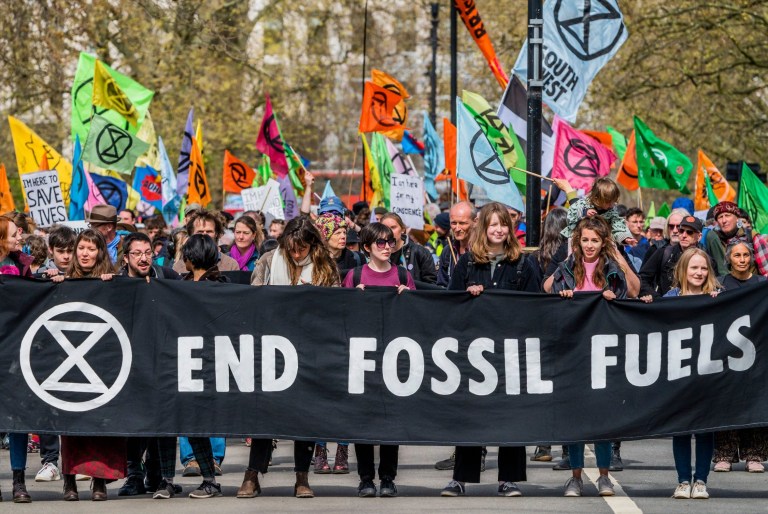 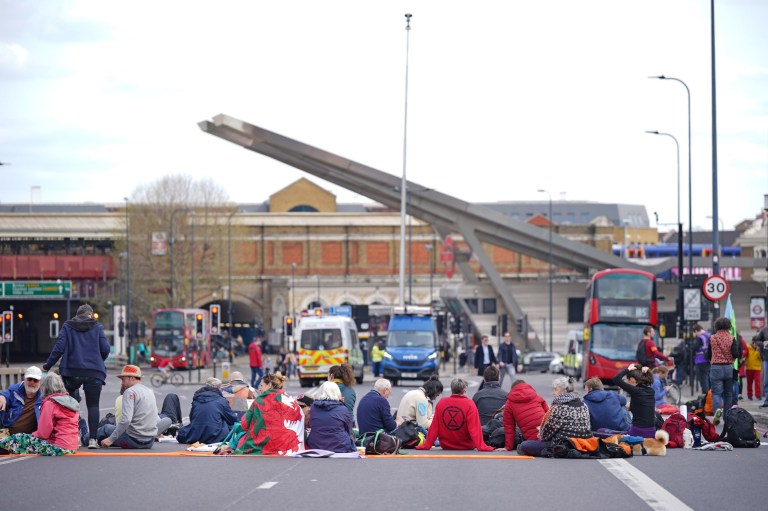 Officers physically removed the last of the activists, a number of whom were taken away in police vans.

The Metropolitan Police tweeted on Sunday evening: ‘Both demonstrations within the Vauxhall Area have now concluded and the roads have reopened.

Doctors and nurses from a small group of medical workers who refused to leave Lambeth Bridge were among those arrested, Extinction Rebellion said.

It comes after the UN warned that the world is on a ‘fast track’ to climate disaster and more than 3°C of global heating earlier this week in the latest dire environmental warning.

Hundreds of demonstrators had gathered at Speakers’ Corner at Hyde Park on Sunday morning before marching into the city centre. 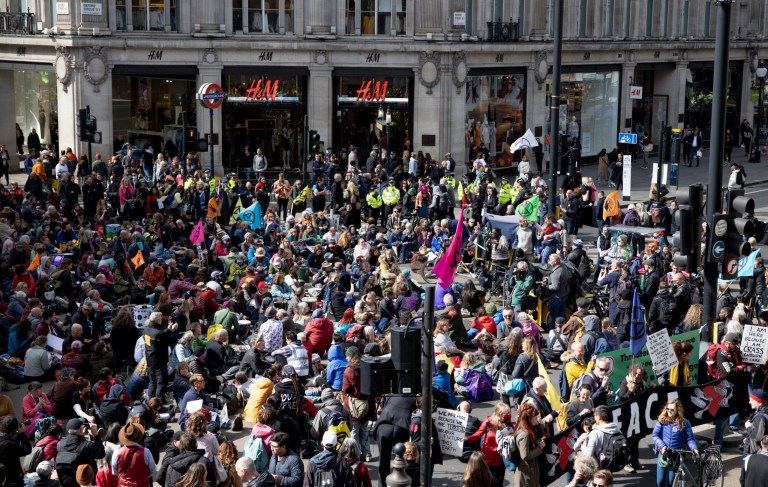 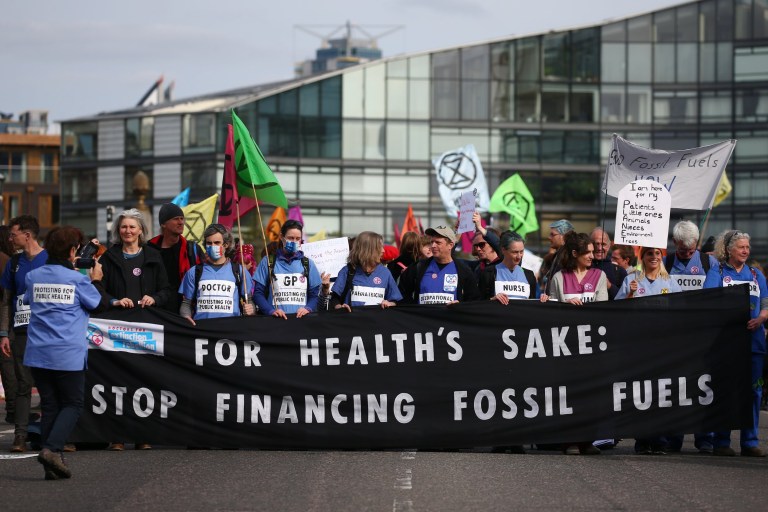 Activist and student Kiri Ley, 21, from Birmingham, said the group was occupying the capital peacefully in order to try and force the Government into changing course – as nothing else had worked.

She said: ‘I know that very often people will question our tactics about disruption for example, to ordinary people, stuff like roadblocks, like gluing on, locking on, and so on.

‘What I would ask people, if you make that criticism, is what actually do you suggest that we do?

‘We tried all the other methods – we’ve written letters, we’ve marched, we’ve spoken to our MPs, we’ve done literally everything we can and time and time again we see them doing completely the opposite of what the scientific evidence says and this is what is left to us, really, we do it because we know it works.’

Adam, in his 60s, from York, added: ‘This may seem disruptive, but it is chicken feed in comparison to climate change.’ 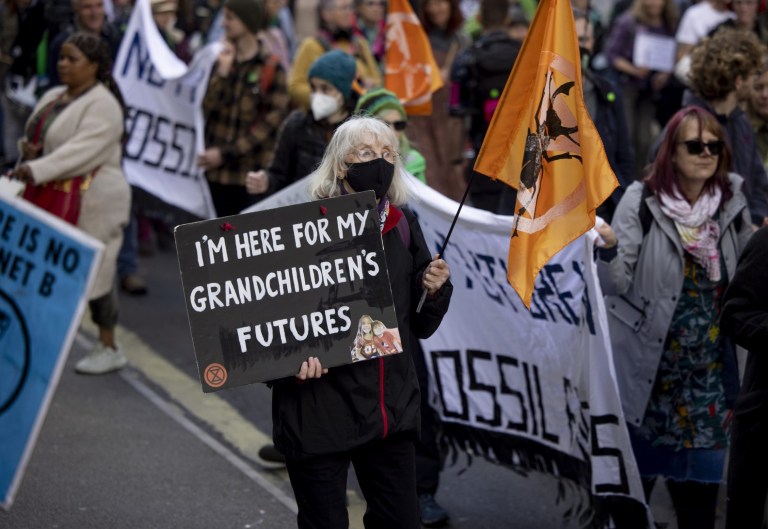 It came a day after some 8,000 protesters flooded the streets of London, according to Extinction Rebellion.

On the first day of mass action on Saturday, they blockaded roads around Oxford Circus and Trafalgar Square.

Extinction Rebellion has vowed to ‘block areas of the city for as long as possible’ every day for at least a week, and on the next three weekends.

The environmental activist group plans to recruit new ‘rebels’ and hold training in non-violent action and resistance tactics in Hyde Park in the mornings before marching into the city centre ‘en masse’, it said on its website.

‘Our disruption will not stop until the fossil fuel economy comes to an end,’ it said.


Green Party MP Caroline Lucas said that some Extinction Rebellion protests are counter-productive, but their disruptive actions are the ‘only way that people feel they can make their voices heard’.

She told Sunday Morning on BBC One: ‘I think that being on the streets of London has been shown to be a way of capturing people’s imaginations.

‘People have joined those protests who have never protested before. They are doing it because they know we have to leave new fossil fuels in the ground.’

On Friday, two Extinction Rebellion protesters shut down Tower Bridge during the morning rush hour by abseiling off the sides of the landmark.

Activists from the group and Just Stop Oil have also been blocking access to oil terminals for ten days, demanding that the Government stops new oil and gas projects.

They disrupted supplies from three oil terminals in Warwickshire, Hertfordshire and Essex on Sunday, Just Stop Oil said, with some in the industry claiming ‘one in three’ petrol station in southern England were closed as a result.