THOUSANDS of homes have been evacuated and 12 uni halls closed after an eight-foot World War II ‘bomb’ was discovered near a city centre.

Cops and bomb disposal teams have declared a major incident in Exeter after the suspected ordnance was found at a building site yesterday morning. 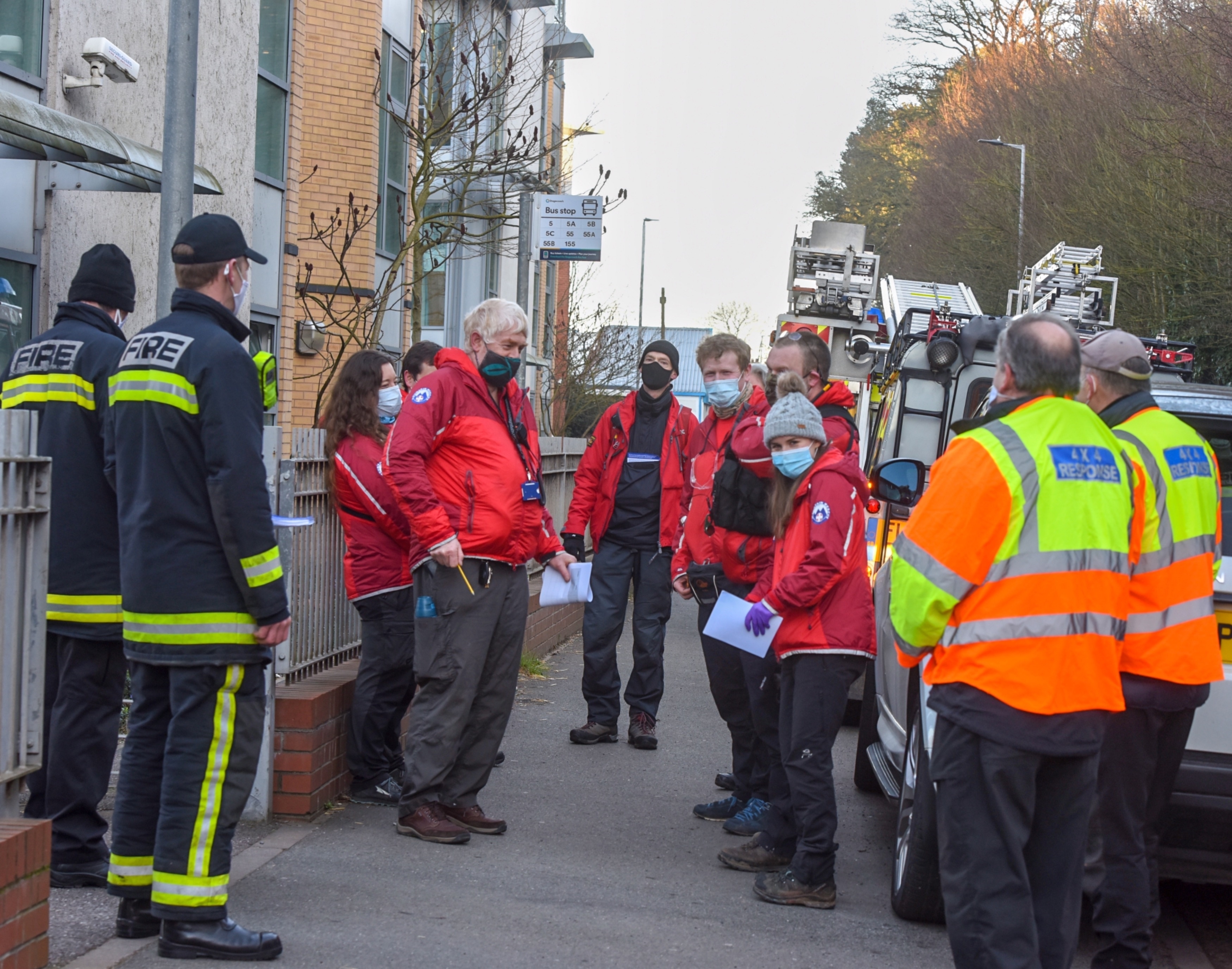 Thousands of homes in Exeter have been evacuated after a suspected WW2 bomb was found in the cityCredit: BackGrid 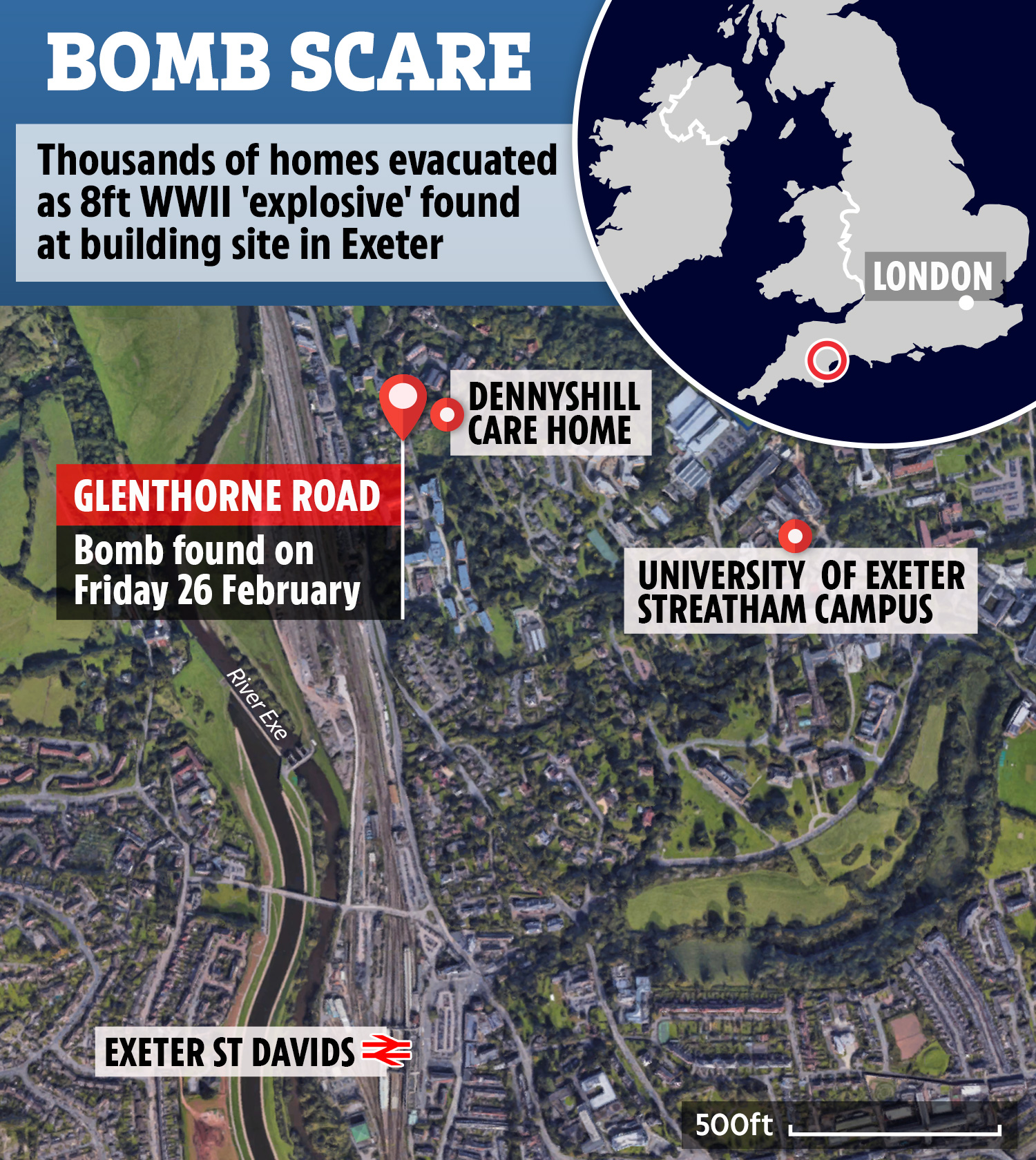 A care home and uni halls are among the residences evacuated, while the busy train station has closed

Royal Navy ordnance disposal squads spent the night working at the site – but police have this morning announced 2,600 homes needed to be emptied.

Residents of a nearby care home and more than 1,600 university students are among those who have been asked to leave their properties.

An 100-metre cordon was initially put in place around the device.

However, worried officers have now extended it to 400 metres over concerns for the safety of the public.

Devon and Cornwall Police said the device, which measures a whopping eight foot by 27 inches, was found on private land in Glenthorne Road, just outside the city’s university.

Navy personnel have built a blast wall around the ordnance so it can be safely detonated.

“We would like to thank all members of the public who have been affected by this incident, particularly residents who have been compliant in evacuating.

“We understand the disruption caused and appreciate everyone’s patience.” 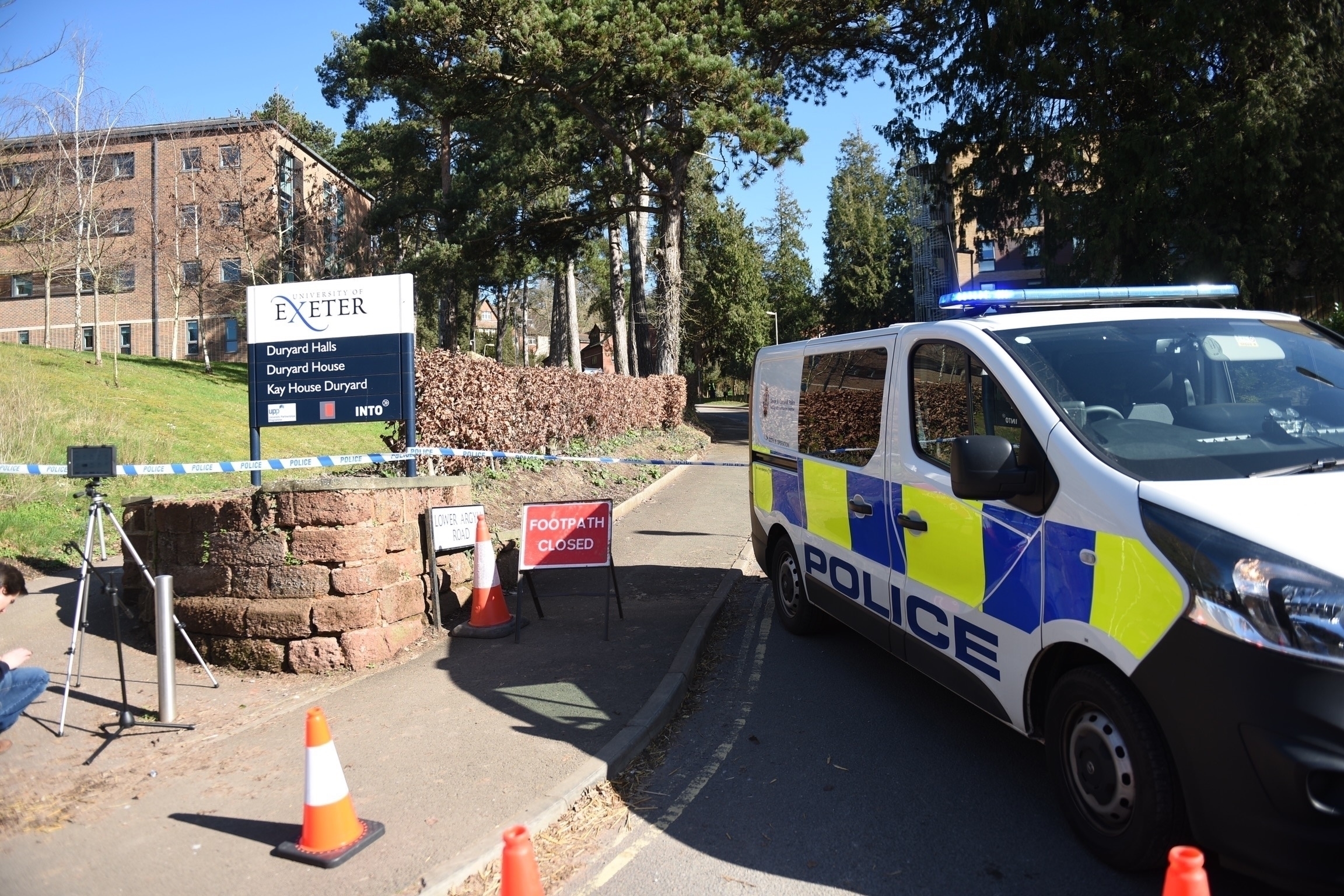 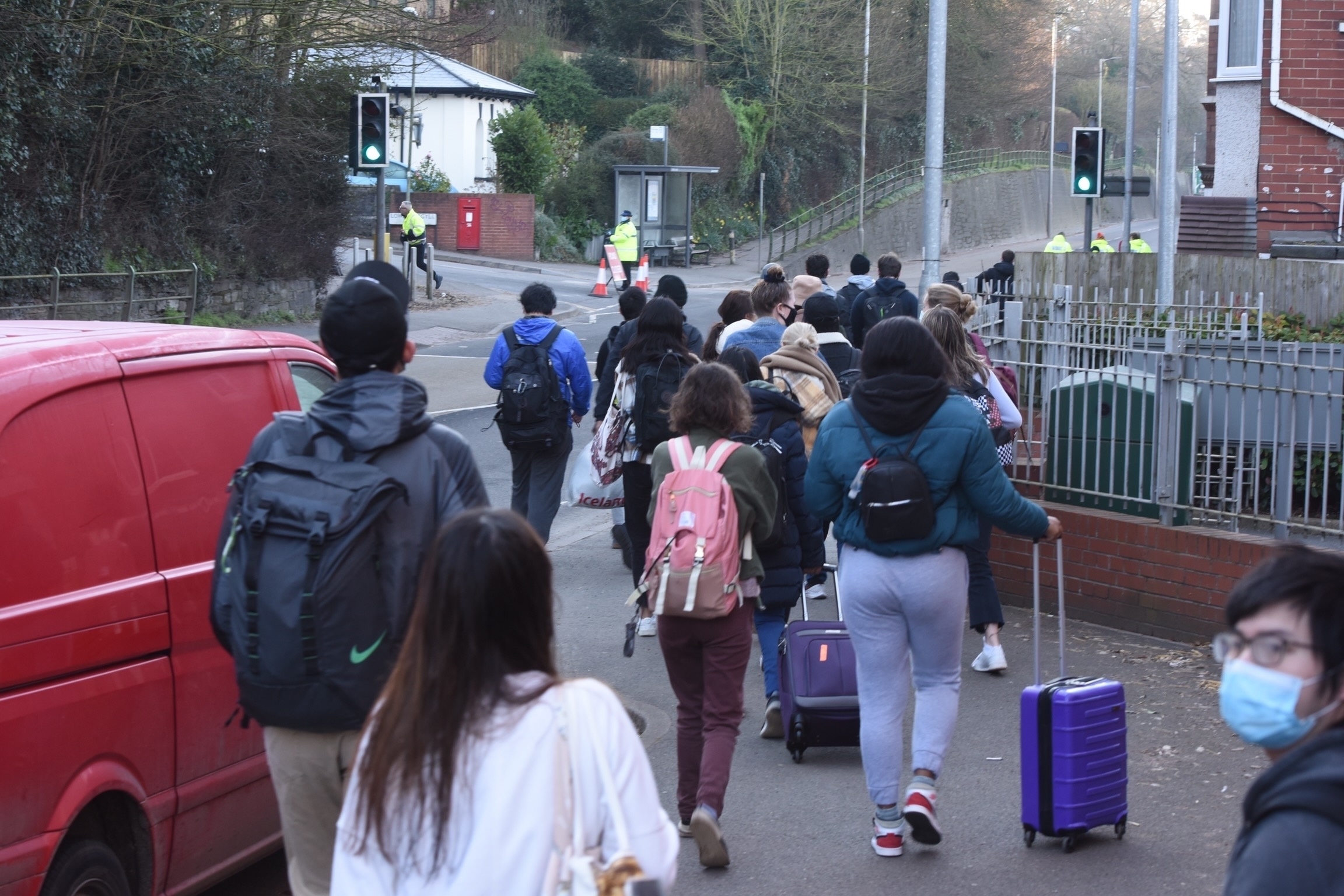 Cops say they hope people will be able to return to their homes later todayCredit: BackGrid 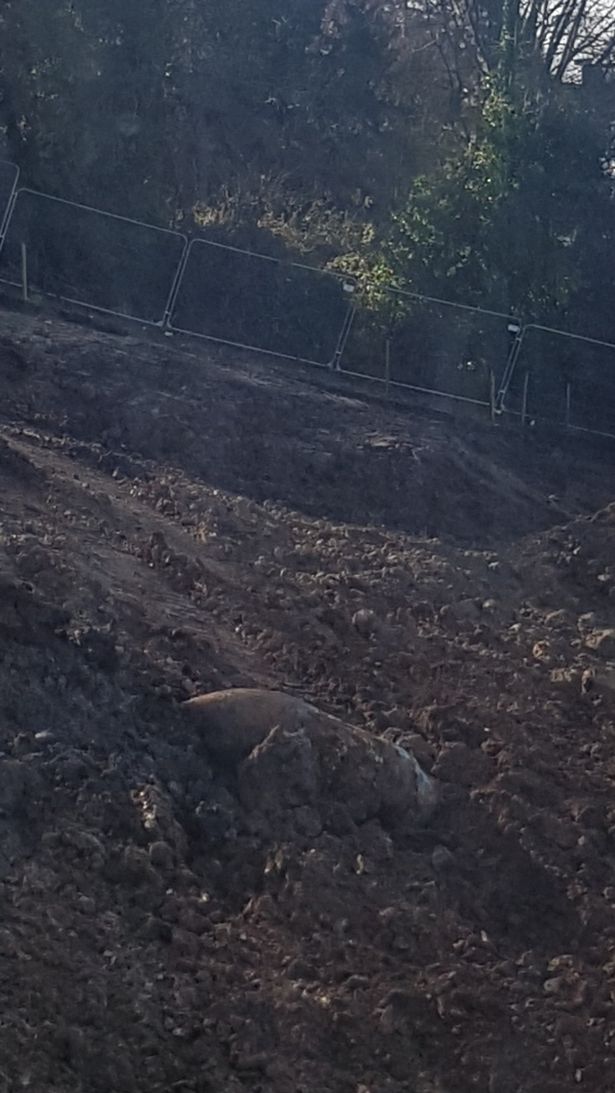 The ordnance – pictured here – was found on private land

Specially-trained Army units began examining the ordnance at 10am.

It’s expected their work could take several hours, but police say they hope people will be able to return home by the end of the day.

The device will be detonated this afternoon, it’s believed.

Cops said: “Residents should be reassured that military, police and partners are working to maintain public safety.

“Exemptions in Covid-19 social distancing rules exist for matters of public safety such as this.”

Yesterday, Inspector Sean Roper admitted resolving the situation would “take some time” because of the “considerable size” of the device.

“That will take us until tomorrow, without a doubt,” he added.

Train services through busy Exeter St Davids have been halted and replaced with buses until at least the end of the day, while several major roads have been closed.

The University of Exeter said all affected students have been given “personal care items and details of food allowances”.

Officials from Devon County Council said no evacuation centres have yet been set up.

“Anyone who was required to leave their home while the bomb disposal team work to make the area safe has been encouraged to visit friends or family, unless they are Covid-19 positive or self-isolating,” a spokesperson said.

“Support is being provided to these individuals around suitable accommodation.”

In April and May 1942, the German Luftwaffe carried out a blitz on Exeter.

The city was targeted in the attacks – part of the so-called Baedeker raids – because of its cultural and historical value.

In total, the nineteen air attacks on Exeter caused the death of 265 people, while 687 were injured, 111 seriously.

A large part of the city centre was devastated, and it was some 20 years before repairs were fully completed.

We would like to say a huge thanks to everyone who has worked so hard over the last 24 hours to relocate our students & support the work of the police & military. Our students have shown amazing patience & co-operation & we will continue to do all we can to support our community. pic.twitter.com/zKuGnzQiqB