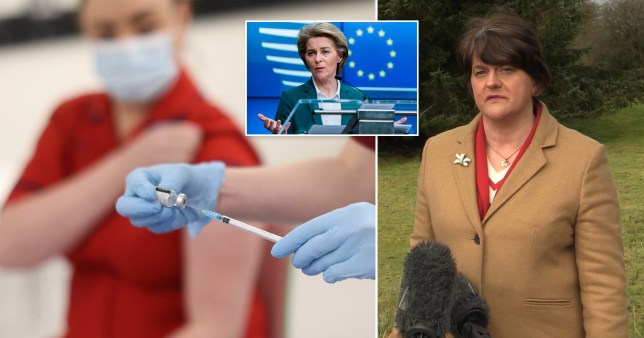 The EU has invoked an article in the Brexit deal allowing the free movement of goods to be curbed (Picture: EPA/PA/Getty Images)

The European Union has enforced controls to stop Northern Ireland being used as a back door to funnel coronavirus vaccines from the bloc to the UK.

But amid growing tensions between the EU and the UK over vaccine supplies, Brussels have triggered Article 16 of the deal’s Northern Ireland Protocol, preventing an free flow of inoculations.

Stormont First Minister Arlene Foster branded the move an ‘incredible act of hostility’ and called on a ‘robust response’ from Westminster. Boris Johnson has said the EU must ‘urgently clarify its intentions’ after unexpectedly introducing the controls.

It comes as the European Commission announced it would restrict the export of some coronavirus vaccines, with the UK notably not included on the list of exempted countries.

The Irish premier Micheal Martin is in discussions with European Commission President Ursula Von Der Leyen to express his concerns.

Under the terms of the Northern Ireland protocol, goods should be able to move freely between the Irish border as the region remains in the single market for goods and still operates under EU customs rules. 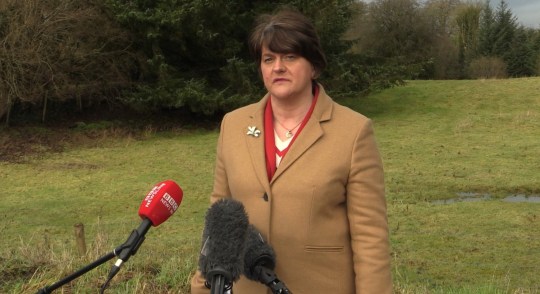 The triggering of Article 16 temporarily places export controls on this movement in respect of vaccines.

It comes amid a deepening row over the allocation of the Oxford/AstraZeneca vaccine after the company announced delays to its EU operations.

The manufacturer angered the European Commission by telling them there would be a 60% shortfall of supplies, leaving them around 75million doses short.

AstraZeneca CEO, Pascal Soriot, insisted it had also had ‘teething issues’ with Britain’s supply – but because UK officials signed its contract three months earlier than the bloc, the disruption was fixed ahead of the EU.

But Brussels suspects the firm is giving preferential treatment to Britain and sent inspectors round to their facility in Belgium to see if there really was a problem.

The UK has refused to bow to the EU’s demands to hand over some of their vaccines, and now the EU has moved to restrict jab exports to Britain.

Foster said that by triggering Article 16 in this manner, the European Union has ‘once again shown it is prepared to use Northern Ireland when it suits their interests but in the most despicable manner – over the provision of a vaccine which is designed to save lives.’

She added: ‘At the first opportunity, the EU has placed a hard border between Northern Ireland and the Republic of Ireland over the supply chain of the coronavirus vaccine.’ 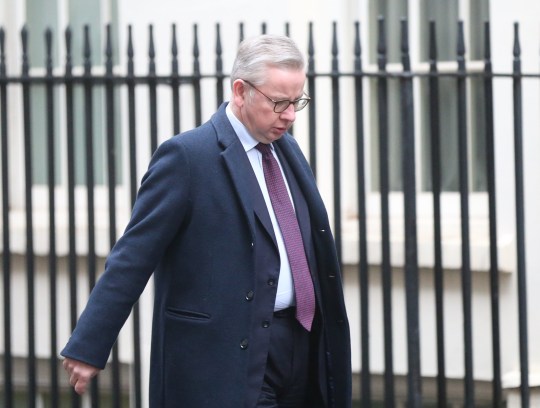 The regulation means Northern Ireland will be considered an export territory for the purposes of vaccine sent from the EU/the Republic of Ireland.

Northern Ireland’s vaccines arrive from the rest of the UK at present so those will be unaffected.

The DUP leader added: ‘With the European Union using Article 16 in such an aggressive and most shameful way, it is now time for our Government to step up.

‘I will be urging the Prime Minister to act and use robust measures including Article 16 to advance the interests of Northern Ireland and the rest of the United Kingdom.’

Cabinet Office minister Michael Gove has told the EU the UK is ‘carefully considering’ the next steps.

The Chancellor of the Duchy of Lancaster spoke to his counterpart on the UK-EU joint committee today.

In a statement, a Number 10 spokesman said: ‘CDL Michael Gove just spoke to European Commission Vice President Maros Sefcovic to express the UK’s concern over a lack of notification from the EU about its actions in relation to the NI protocol.

‘CDL said the UK would now be carefully considering next steps.’ 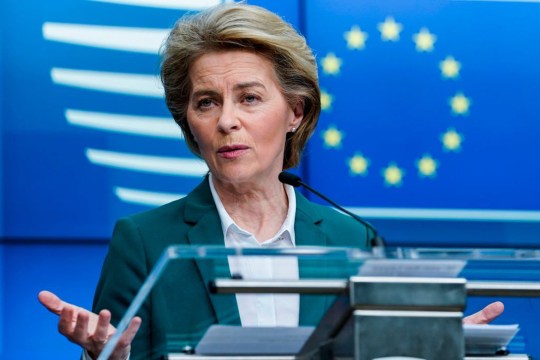 The European Commission said: ‘Exports of goods from Northern Ireland to other parts of the United Kingdom cannot be restricted by Union law unless this is strictly required by international obligations of the Union.

‘Therefore, movements of goods covered by this regulation between the Union and Northern Ireland should be treated as exports.

‘Whilst quantitative restrictions on exports are prohibited between the Union and Northern Ireland, in accordance with Article 5 (5) of the Protocol on Ireland/Northern Ireland, this is justified as a safeguard measure pursuant to Article 16 of that Protocol in order to avert serious societal difficulties due to a lack of supply threatening to disturb the orderly implementation of the vaccination campaigns in the member states.’

He added: ‘The EU is unilaterally invoking Article 16 to protect its own interests and it’s about time the UK Government did the same instead of being lead actors in a ridiculous charade that there is no border in the Irish Sea and that Article 16 can’t be invoked.’

He said: ‘This afternoon’s invocation of Article 16 of the protocol to inhibit exports of Covid vaccines from the EU to Northern Ireland is the most telling illustration imaginable that for the EU the protocol is a plaything to be exploited when it suits its selfish interests.

‘The idea that the EU cares anything for Northern Ireland or its people is exposed as utterly bogus.

Alliance MP Stephen Farry has said the EU’s decision to use Article 16 in a bid to control vaccine distribution is not justified or warranted.

He added: ‘We are in the middle of a global pandemic, there are no sides in the fight against Covid. Yet this completely unjustified and unwarranted move will only serve to heighten an already tense situation.

‘We don’t need a vaccine war, and other alternatives exist for the EU to manage its vaccine supply.

‘The situation in Northern Ireland is already fragile and we should not be placed at the centre of this dispute.

‘Implementation of the Protocol has already been challenging. But due to the bad choices of others, it is all that we have to address the particular circumstances of Northern Ireland and to protect the Good Friday Agreement. It must not be allowed to unravel.

‘The European Commission must urgently reconsider and reverse the approach that they have adopted.’

What celebrities are appearing on Long Island Medium: There in Spirit?