The saw-scaled viper is capable of delivering a powerful venom which causes an unpleasant an agonising death (Picture: SWNS)

An Essex workman who picked up a stowaway snake which can inflict an agonising death is lucky to be alive.

The reptile had curled up in a shipment of stone from India and intrigued staff at the site where it was delivered assumed it was harmless.

Little did they know that the animal which had arrived at their workplace is in fact one of the most deadly on the planet.

The saw-scaled viper is thought to account for more snake bite deaths globally than any other.

Tens of thousands of people die from snake attacks every year, primarily in tropical climates.

It’s not usually something your average stonemason in Coryton needs to worry about – until this week, at least.

Luckily, the two-foot venomous snake was too cold from its long journey to strike.

But an animal expert from South Essex Wildlife Hospital said the outcome could have been tragic if they hadn’t been called. 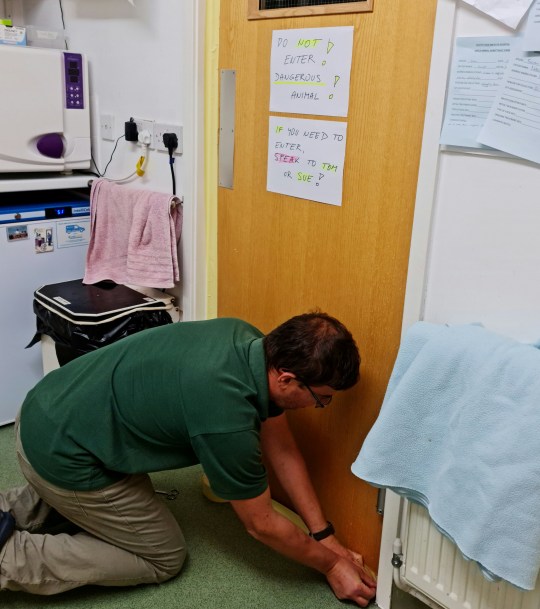 Wildlife experts have had to take extra precautions to make sure the snake isn’t able to escape or attack anyone (Picture: SouthEssexWildlifeHospital/SWNS)

Sue Schwar, manager of the wildlife hospital, said: ‘It’s highly likely that if we didn’t pick it up then someone could have died.

‘The stonemason was walking around holding it and then when the police said it was dangerous he put it into a box.

‘He could have died. I don’t know if we have an antivenom in case someone was bitten. He’s lucky to be alive.’

Saw-scaled vipers are notorious for their quick and vicious attacks – and their venomous bites can cause an excruciating death if not treated.

Sue said: ‘Your organs will rot. It’s not instant death.

‘They are highly aggressive snakes. You won’t get away with picking these up – it will bite you.

‘Luckily, this snake was less active because it was cold [from being stowed away].’

The viper has now been locked inside a locked box – inside a sealed room – at the wildlife hospital to keep staff safe.

Sue said the reptile was too dangerous to be kept and will be transferred to a scientific facility.

She added: ‘It was hissing and spitting when our reptile expert collected it.

‘I don’t think people understand how dangerous this animal is.

‘It will kill you if you open the box. It’s not an option to keep the viper.’

In 2018, the World Health Organisation declared death from snake bites a global health priority, according to the BBC.

As many as 138,000 die from venomous bites every year, many of them by the saw-scaled viper.