THIS is the embarrassing moment a man fell out of a convertible as his pal tried to make a stylish exit from a car enthusiast’s meet-up.

The red-faced passenger was sitting on the back of the drop-top BMW when he hilariously slid off as his friend roared the engine.

The man desperately tried to cling onto the car as his pal acceleratedCredit: Instagram/@lamby_v 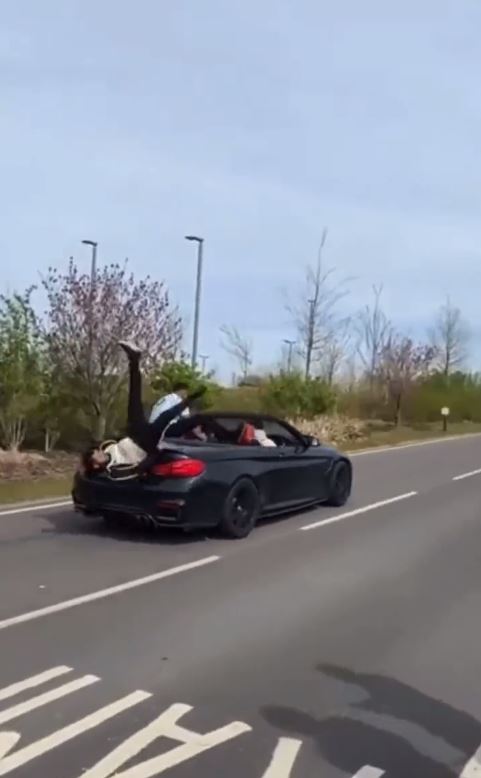 But the bloke somersaulted off the back of the BMW at the car meet in WarwickCredit: Instagram/@lamby_v

The foursome had been at the Ultimate BMW Car Meet at the British Motor Museum in Warwick on Sunday showing off their vehicle.

The day event was packed out with BMW fanatics desperate to get a glimpse of other modified vehicles.

But the driver of the black convertible got a little too cocky when leaving the car park – and sent his pal somersaulting through the air.

While leaving the venue, the clip shows the motorist slowing down while approaching a speed bump.

But after smoothly driving over it, he revs his engine and drastically amps up his speed, seeing the unprepared passenger fly off the back.

Despite trying to cling on, the tracksuit-wearing man was left sprawled across the floor as bystanders watched on in horror.

He is seen dusting himself off before sheepishly walking back towards the BMW after the cumbersome display.

Brits were left in stitches at the comical clip of the forlorn fella upstaging his mate’s extravagant exit.

One person commented: “Play it cool trigger… I’m sure nobody saw!”

Another joked: “Love it when showing off turns out like that.”

While a third added: “There’s the lessons for the kids on wearing seat belts. You might look cool until you fall out!”

We previously told how another mortified motorist was dubbed “Britain’s worst parker” after wasting a phenomenal eight minutes trying to reverse into a space.

The hapless driver was seen going back and forward countless times – and spectacularly failing to manoeuvre between the white lines in Kent.

Video shows the Brit, believed to have been in his “30s or 40s”, trying to park in FOUR different spaces. 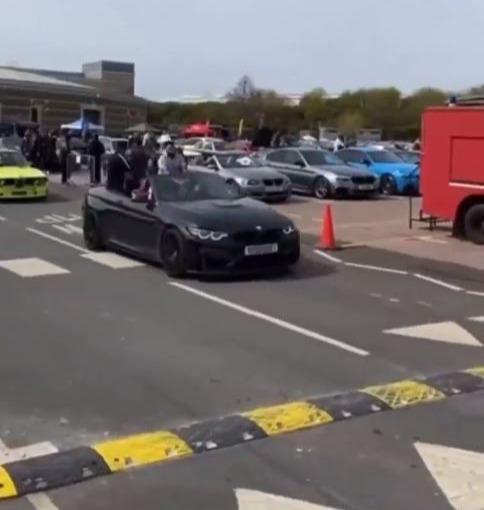 The lads had been admiring motors at the car meet at the British Motor MuseumCredit: Instagram/@lamby_v