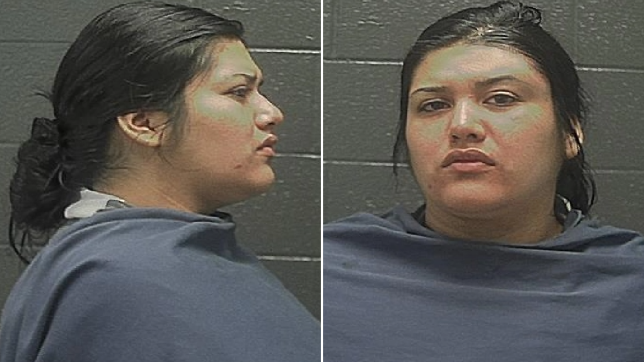 Adriana Sierra is accused of drunkenly attacking her boyfriend with a hairdryer after he refused her sex (Pictures: Wichita County Jail)

A drunk mother got kicked out a nightclub – then attacked her boyfriend with a hairdryer after he refused to have sex with her, police say. Adriana Sierra allegedly bludgeoned her boyfriend in the early hours of Sunday after climbing on top of him and demanding sex, only to be told no.

She is said to have gone clubbing while her partner stayed at home to watch their kids, then came home in a drunken rage after being kicked out. Sierra’s partner said the noise she was making woke up their children, and that she picked up a hairdryer by its cord, striking him several times with the device.

The man, who wasn’t named, said Sierra then picked up their daughter and ran to the house next door. Police were called, with Sierra claiming she had suffered domestic violence at the hands of her partner, telling an officer ‘He just beat my ass.’

Asked for further detail, Sierra was allegedly too drunk to make sense, and did not offer a coherent version of events, according to the Times Record News. She eventually claimed that her boyfriend had punched her with a close fist after refusing her sex.

Officers then questioned Sierra’s partner, who insisted that she was the aggressor, and that he had been the victim.

Both had injuries, but Sierra was arrested after shouting ‘Let me back around him and I’ll beat his ass again,’ while being questioned by police.

Sierra, who has previous arrests for public intoxication and running a red light, has been charged with domestic assault.

She was booked into Wichita County Jail, where her bond was set at $2,500.

Five years after Gary Neville was sacked by Valencia