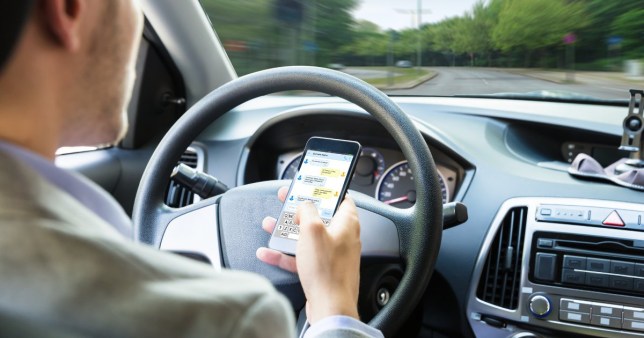 People at the wheel will still be able to use their phones for sat-nav if it is in a hands free cradle (Picture: Getty)

Drivers in the UK are set to face a near-total ban on using their mobile phones this year.

The Government finished a consultation on an apparent legal loophole last month, which meant people could use their phones for certain things while driving.

It is currently illegal to make phone calls and send text messages at the wheel, but hand-held phone use is technically allowed for other functions.

Now the Government is analysing the results of a consultation aiming to all but outlaw drivers touching their phones, in an effort to target people taking pictures, choosing music or playing games. It is unclear exactly when the new rules could come into force, but some reports suggest it will be ‘early’ this year.

The Government says some drivers have escaped punishment due to the loophole, which means some phone use is not seen as ‘interactive communication’ – meaning it does not fit the current definition of the offence.

The penalties for breaking the current laws are six penalty points and a £200 fine.

Announcing the consultation in October, Roads Minister Baroness Vere said: ‘Our roads are some of the safest in the world, but we want to make sure they’re safer still by bringing the law into the 21st century.


‘That’s why we’re looking to strengthen the law to make using a hand-held phone while driving illegal in a wider range of circumstances – it’s distracting and dangerous and for too long risky drivers have been able to escape punishment but this update will mean those doing the wrong thing will face the full force of the law.’

It is one of seven new laws expected to be brought in for drivers this year.

Ministers have rejected calls to ban the use of hands-free functions – meaning drivers will still be able to continue safely using phones without touching them while driving, for things like sat-nav secured in a cradle.

The consultation suggests ‘broadening the offence of using a hand-held mobile phone while driving so that it captures standalone mode functions as well as the existing interactive communication functions’.

However, the Government is planning to  introduce an exemption to allow drivers to make contactless payments at venues like drive-through food outlets.

AA president Edmund King OBE said there is ‘no excuse’ for picking up a phone while driving.

He added: ‘Phones do so much more than calls and texts, so it’s only right that the law is changed to keep pace with technology. Tweets, TikTok and Instagram snaps can all wait until you park up.

‘These new rules will clarify the law and help drivers realise that this dangerous act can have the same consequences and be as socially unacceptable as drink driving.

‘If you cannot resist the temptation to pick up your phone, then you should convert your glovebox into a phone box.’

Police also believe phone use while driving can cause car accidents and kill people.

Metro.co.uk has contacted the Department of Transport for comment.