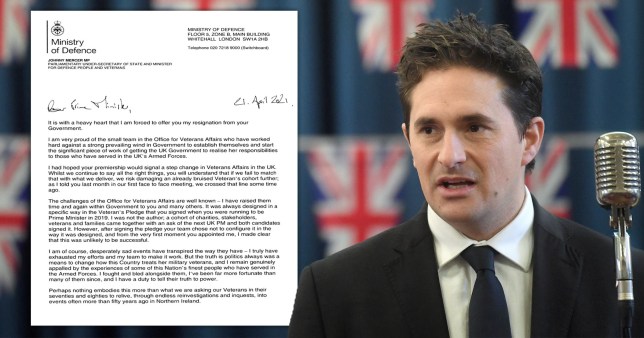 The Veteran Minister Johnny Mercer launched a blistering attack on the Government on Tuesday night, after Downing Street confirmed he was quitting the role.

The former Army officer is standing down amid tensions over investigations into former members of the armed forces years after the Troubles in Northern Ireland.

Other reports suggest Mr Mercer had been ‘sacked’, with the minister said to be unhappy about a lack of progress on the issue.

In a letter to the Prime Minister published on Twitter this evening, the Plymouth Moor View MP said he had hoped Boris Johnson’s premiership would ‘signal a step change in veterans affairs in the UK’. He described his departure as being ‘relieved of my responsibilities’.

And, in a thinly veiled criticism of the Government’s efforts on the issue, Mr Mercer added: ‘Whilst we continue to say all the right things, you will understand that if we fail to match that with what we deliver, we risk damaging an already bruised veterans cohort further, as I told you last month in our first face to face meeting, we crossed that line some time ago.’

Shortly before his departure was confirmed, Mr Mercer told Sky News as he left parliament: ‘I’ve got nothing to say, they can all play these silly games – I’m not interested. 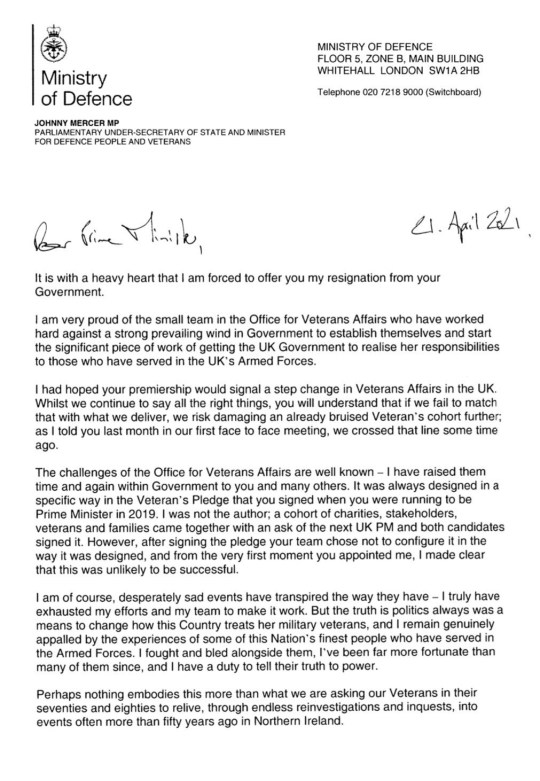 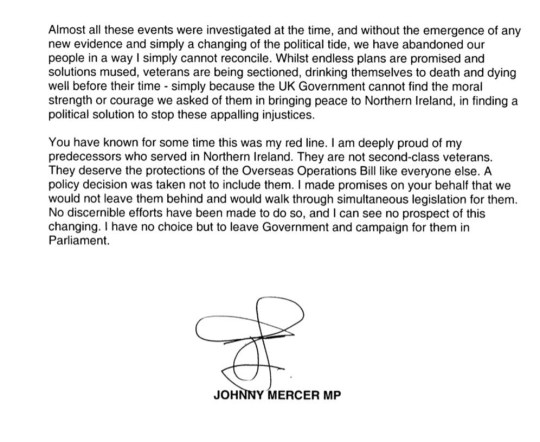 He released the statement on Twitter this evening (Picture: Twitter/Johnny Mercer)

He accused the government of ‘abandoning our people’ and not finding the ‘strength or moral courage’ to act.

Mr Mercer claimed ‘no discernible efforts’ had been made to help veterans he says have been repeatedly asked to relive events of almost 50 years ago.

The PM thanked Mr Mercer for his service, according to a No 10 spokeswoman.

The statement released shortly after 7pm said: ‘This evening the Prime Minister has accepted the resignation of Johnny Mercer as minister for defence people and veterans.

‘He thanks Johnny Mercer for his service as a Government minister since 2019.’

Mr Mercer – who said he had been ‘forced to offer you my resignation’ with a heavy heart – had been heavily involved in the Overseas Operations (Service Personnel and Veterans) Bill, which is going through its final stages in Parliament.

The legislation was developed in response to legal claims made after operations in Iraq and Afghanistan, but does not cover incidents in Northern Ireland.