The day after the Brexit referendum the playwright Pamela Carter wrote to her German publishers, Suhrkamp, to apologise. “I felt the need to say sorry to a European for the terrible mistake,” she said.

Two weeks later in a Dundee hotel, still steeped in bewilderment, she came across a Guardian Long Read I’d written, recalling the events of April 1936, when a group of London schoolboys had set out from their youth hostel in Freiburg, southern Germany, for a hike in the Black Forest. They were led by their charismatic teacher, who ignored numerous warnings and made a series of fatal decisions that resulted in five of them losing their lives.

“It was just an amazing story and felt so apposite at the time,” she recalls. Struck by the parallels between the events of 1936 and the present – “in which a populist idiot has also led us to various precipices,” she says with a forced grin – she began channelling her thoughts and frustrations over Brexit into writing a stage drama on the “Black Forest tragedy”.

The resulting work has now culminated in Schauinsland: The Misfortune of the English, which premiered at Freiburg Theater this year. Carter’s script, a polyphony of the boys’ voices, has been melded with instrumental and vocal parts – Elgar meets Talking Heads – composed by the theatre collective Kommando Himmelfahrt. The knobbly-kneed boys, their “skinny chests expanding with good character, the snot clicking in their noses”, meander optimistically through the woods like cardboard cutouts in a dreamlike diorama that resembles a Brothers Grimm pop-up book. They sing hits of the period, such as Isn’t it a Lovely Day, and their school hymn, as well as eulogising their young teacher Kenneth Keast.

“Keattie”, as local historian Bernd Hainmüller discovered during 20 years of exhaustive research into the Black Forest tragedy, had ignored repeated warnings from locals in the foothills of the Schauinsland mountain that the group should cancel their hike due to worsening wintry weather conditions. The locals were shocked at how inadequately kitted out they were, in shorts and shoes, carrying a couple of buttered rolls each; Keast had a 1:100,000 scale map, not detailed enough to show vital terrain, and scant knowledge of how to use a compass.

Around 12 hours after they had set out, four of the boys – Francis Bourdillon, Peter Ellercamp, Stanley Lyons and Jack Eaton, all between 11 and 15 years old, had collapsed and died of exhaustion and heart failure; a fifth, Roy Witham, 14, died in hospital the following morning. 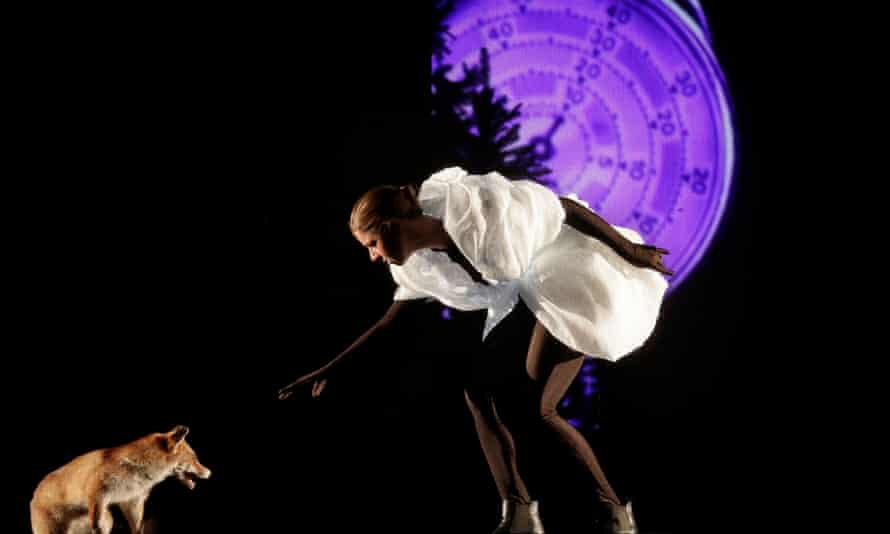 In his review of the play, the theatre critic for Freiburg’s local paper delivered the blunt assessment that “the authoritarian nationalist thinking of the British teacher” – who refused to let his pupils turn back or ask for help out of a sense of national pride and male chauvinism – “was not that far away from that of National Socialism”.

Hainmüller had first approached me in 2015, requesting help to fill in some of the gaps in the story. Months of archive research and correspondence resulted in the article, which triggered a new wave of correspondence between Hainmüller and the families of victims and survivors, eager to share their tale and keen to learn more, from as far afield as Australia. It even inspired a graphic novel.

Enjoying a drink after the premiere of Schauinsland, Hainmüller referred to the catastrophe in no uncertain terms: “[It was] nothing less than a grotesque mix of fathomless recklessness, insufficient kit, a lack of local knowledge, misguided educational methods and ambition.” His investigatory book, Tod am Schauinsland (Death on Schauinsland), also came out this year and formed the basis of the production.

Hainmüller’s painstaking reconstruction of the story, which reads like a thriller and is crying out for an English translation, involves everything from diary accounts, postcards home, the newspaper coverage at the time, and the correspondence between the foreign office and the local British consulate, Robert Smallbones. More recently Hainmüller uncovered the tacit agreement reached between the British and German governments to ban Keast, the teacher, from taking any more trips abroad, even as his own local education authority more or less exonerated him.

Carter drew on the sources after contacting Hainmüller while travelling to Freiburg in the summer of 2017, where she retraced the schoolboys’s footsteps and met locals who had risked their own lives to rescue the survivors and salvage the bodies, and without whom undoubtedly many more of the 27-strong group would have died. 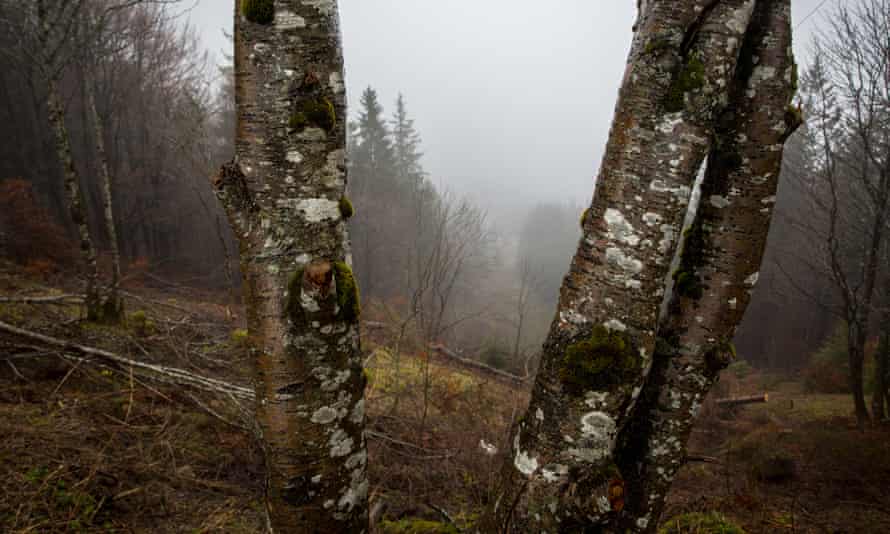 The theatre production is punctuated with the chimes of bells, echoing those that rang out from the church in the village of Hofsgrund and guided the surviving boys towards safety.

But it was the Hitler Youth, not the villagers, who were given credit for the rescue attempt, after the Nazis – in power by then for three years – recognised the disaster’s propaganda potential at a time when the German Reich was trying to present itself to the world as a benevolent state. It suited Britain at the time – with its appeasement policy towards the Nazis in the hope of avoiding war – to go along with the propaganda. And that was the version that stuck for decades.

A handful of villagers were among the audience on Saturday, including Hanspeter Rees and Fridolin Gutmann, whose grandparents and great grandparents had been involved in the rescue operation. They take part in the annual spring clean of the bombastic monument, the so-called Engländerdenkmal (Englishmen memorial) erected by the Nazis shortly after the tragedy.

“We’re proud to see this on the stage, particularly after decades in which the Hofgrunders’ role was effectively airbrushed out of history,” Rees says. “But we still say on behalf of our relatives [that] they were only doing what they felt it was necessary to do.” In Hofsgrund, the events continue to stand for the folly of failing to heed the weather warnings from locals who know best. 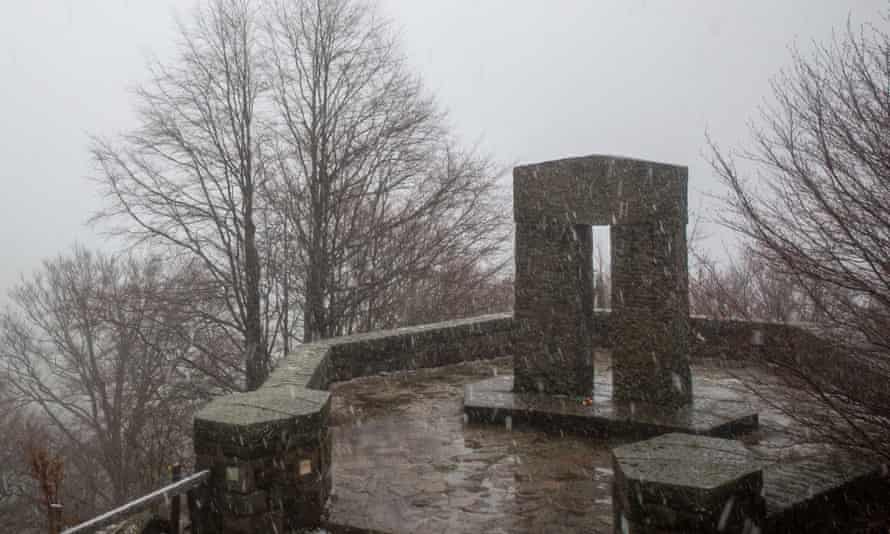 Hainmüller is moved by the depiction of the tragedy, and says it may be time to let the story go. But he admits he never will. There are still documents relating to the case in British foreign office archives that have yet to be seen. And he remains intrigued by certain questions, such as why so few of the survivors ever spoke out about their ordeal. Were they silenced, or wracked with guilt?

The play is told from the point of view of the London schoolboys, their minds, says Carter, “steeped in the ideology of empire and World War I, instilled with an unquestioning strong sense of national identity and allegiance”. There is a dignified, poetic poignancy to their voices, not least because three years on from the tragedy, most of them would be old enough to be called up to fight against the Germans.

During my conversation with Hainmüller, he had looked out from the theatre courtyard to a fountain marking the spot where Freiburg’s main synagogue stood before it was destroyed in Kristallnacht in 1938. “You can’t undo what’s done,” he said. “But a careful reappraisal of the past makes a lot of sense. It can also help set the tone for the future.”