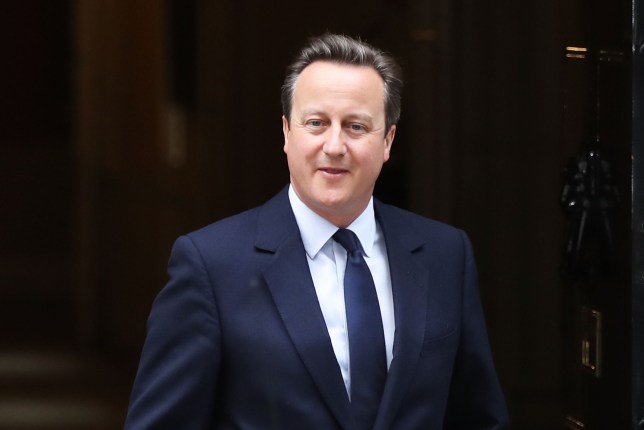 So far the Government has refused to make public any of Cameron’s messages to ministers (Picture: Dan Kitwood/Getty Images)

Boris Johnson may think he can close down the Greensill lobbying story by pushing David Cameron under a bus, but he cannot wash his hands of this scandal so easily.

The stench of sleaze surrounding this affair does not start and end with the former prime minister. Mr Cameron may have been using his contacts list to lobby government ministers, but they appear to have held the door open for him.

As the Conservative chair of Parliament’s Liaison Committee has said, this row has revealed a ‘very casual culture’ in the relationship between ministers and business. That casualness operates both ways.

The Chancellor twice replied to Cameron’s text messages, from his personal phone, saying in one that he had ‘pushed the team’ of Treasury civil servants to find an answer to Cameron’s request for taxpayer-funded loans for Greensill.

Rishi Sunak has now released the text of those messages under a freedom of information request, without explaining what he meant by ‘pushed’, but no doubt patting himself on the back for his transparency – transparency which does not extend to attending the House of Commons to answer an urgent question on the issue.

Three Treasury ministers were ‘reached out to’ by the former prime minister. Then there’s the ‘private drink’ that Matt Hancock had with Cameron and his employer, Lex Greensill, a private drink that involved discussing a potentially lucrative NHS deal.

So far the Government has refused to make public any of Cameron’s messages to ministers, which suggests that it still fails to recognise that transparency is at the heart of this scandal.

It was never right that a former prime minister should be lobbying his ex-colleagues in this way. The fact that Cameron himself had highlighted the dangers of ‘secret corporate lobbying’ back in 2010 makes his actions even more shameful.

Nor do I believe Gordon Brown’s suggestion of a five-year hiatus before ex-prime ministers can lobby Government is acceptable: if ex-colleagues are still in government, there is still the opportunity for abuse.

Cameron’s self-defence also shows a huge lack of self-awareness, which would be astonishing if it wasn’t typical of far too many ministers and ex-ministers

Cameron has defended himself saying he broke no rules, which underlines the point that the rules themselves are broken if they don’t prevent this kind of backroom attempt to influence ministers.

His belated admission that he should have used ‘the most formal of channels’ barely scratches the surface of what’s so deeply wrong about all this: the very secrecy that he himself warned about in 2010. Did he think, as an ex-prime minister, that somehow it didn’t apply to him?

Cameron’s self-defence also shows a huge lack of self-awareness, which would be astonishing if it wasn’t typical of far too many ministers and ex-ministers. So many of them seem to think that standards in public life just don’t apply to them – they can do what they want with impunity, and if they’re caught, the prime minister will have their back.

We’ve seen the housing minister sign off a multi-million pound development, which would have saved the Tory donor property developer tens of millions of pounds in taxes, despite the misgivings of civil servants. There were no consequences with the prime minister closing the case.

The Home Secretary was found to have broken the ministerial code by an inquiry, which under previous governments would have resulted in an automatic resignation.  Again no action, bar a weasel-worded apology. It was the independent investigator who quit.

Ministers have used the Government’s ‘levelling up’ towns fund to brazenly hand millions of pounds of public money to areas, the majority represented by Conservative MPs, regardless of deprivation levels, without a hint of embarrassment.

Then there’s the so-called VIP lane for Covid-related contracts, which has led to millions – if not billions – of pounds of public money being handed over to companies and individuals with Tory party links.

It has been shrugged off with the excuse ‘We’re in a public health emergency’.

That may have been justifiable at the beginning of this crisis but, according to the Financial Times, contracts are still being handed out without an open competitive tendering process, even after the National Audit Office warned last year that such a procurement process risked undermining public trust.

But there is one thing that David Cameron did get right. When he spoke out about secret lobbying in 2010, he said it was undermining public confidence in the political system. I couldn’t agree more.

The British Social Attitudes Survey published last year found that public trust in government had fallen to its lowest level for 40 years. Fewer than one in five people trust politicians to tell the truth; trust in government ministers is similar. Across the world, including Britain, there is a worrying lack of faith in democracy.

This matters not only because so many of our liberties depend on a robust, functioning democracy. It matters because government has a huge role to play in tackling some of the biggest challenges facing us, not least the climate and ecological crises.

Trust in political leadership is essential for people to embrace the scale and pace of change that’s needed to respond to these crises, in a way that’s fair and leaves no-one behind.

But trust in this Government is in very short supply and we will all pay the price for that.