Crisp shortage UK: Full list of affected snacks and when they will be back

The UK has endured many shortages this year, in everything from fuel and Nintendo Switches, to meat and pasta.

But the latest casualty of the shortage crisis is due to cause the most outrage of all – Walkers crisps.

The supply disruptions are set to continue for several more weeks, raising the concerning prospect of the festive favourites being in short supply this Christmas.

But why are crisps missing from our shelves, and which salty staples have been affected?

Why is there a crisp shortage in the UK?

Walkers said products had been affected by an IT glitch, which came about when they were updating their system.

A spokesperson for Walkers said: ‘A recent IT system upgrade has disrupted the supply of some of our products.

‘Our sites are still making crisps and snacks but at a reduced scale. 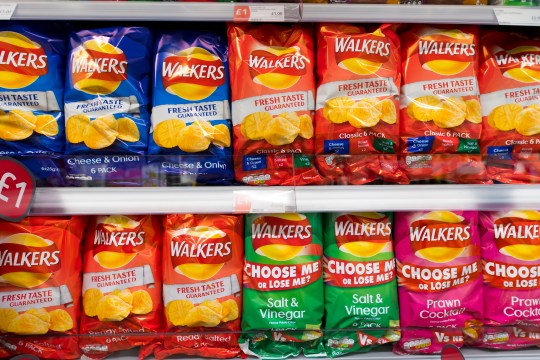 For now, crisps are off the menu (Picture: Matthew Horwood/Getty Images)

‘We’re doing everything we can to increase production and get people’s favourites back on shelves.’

The company has said the problems have now been fixed, but they have caused its factories to run below full production.

However, the factory assured that it was ramping up production of its most popular crisp flavours including cheese and onion and salt and vinegar.

A number of products are unavailable on the Tesco website and empty shelves have been seen in some supermarkets.

People have flocked to social media to share their outrage.

One user wrote: ‘why isn’t anybody talking about this crisp shortage. i’m shaking and crying and SHAKING’

Another tweeted: ‘I can cope with many a thing but a crisp shortage is not one of them.’

A third user described the shortage as ‘truly apocalyptic’.

But, all hope is not lost, as your favorite snacks are still currently available at other supermarkets such as Sainsbury’s and Asda.

Which crisps are affected by the shortage?

All crisps made by Walkers will be impacted to varying extents by the supply disruptions. 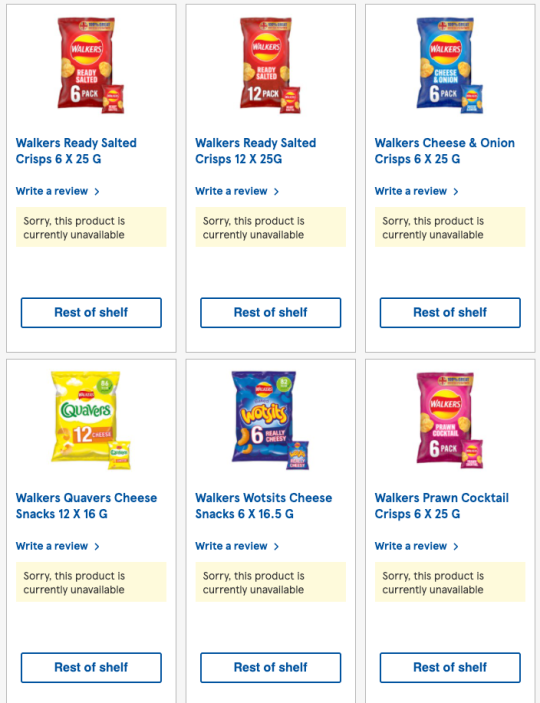 Many salty staples are not available at Tesco (Picture: Tesco)

These include the following snacks:

When will the crisps be back on supermarket shelves?

Walkers has said its factories will not be able to reach their usual production levels until the end of the month.

That means the shortage is likely to continue for weeks.