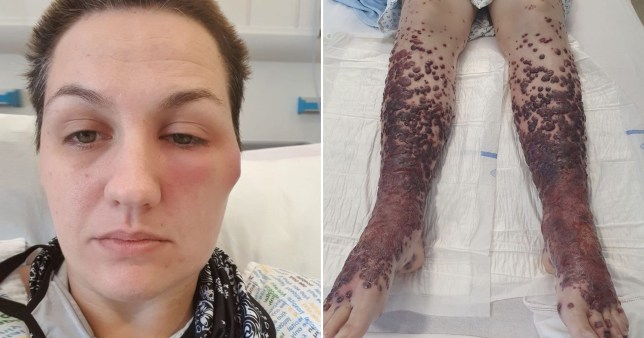 Sarah Beuckmann, from Glasgow, is still urging people to get the jab despite suffering a severe reaction (Picture: Mirror Pix)

A woman’s legs erupted into painful blood-filled blisters after receiving the AstraZeneca vaccine.

Sarah Beuckmann, from Glasgow, initially only developed common flu-like symptoms when she had her first dose of the jab on March 18.

But a week later she began to feel a tingling sensation in her legs and noticed a rash spreading around her ankles.

The 34-year-old took herself to A&E as the painful blisters merged together.

She spent more than two weeks at Queen Elizabeth University hospital undergoing tests with doctors, who determined that she had suffered a reaction to the vaccine.

Sarah said she would still encourage people to get the jab as she knows her side effect was extremely rare.

But the mum, whose rash spread to her arms, face and buttocks, wants people to be aware of the changes it can cause to the body and what to do if they have an extreme reaction. 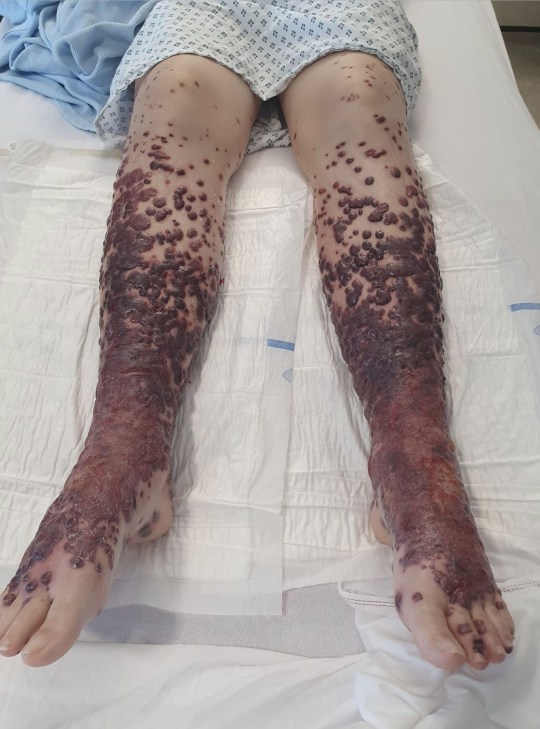 Sarah Beuckmann’s entire legs turned into one giant blister after getting the Oxford vaccine (Picture: Mirrorpix)

She told the Daily Record: ‘I still believe people should be vaccinated and the amount of people that have had it and have been okay shows that it is safe for most.

‘I just want people to be aware that there are some reactions that can occur and not to ignore any rashes.

‘It’s not to scare people but just in case this does happen to anybody else, it means they’re going to get the treatment straight away.’

In an attempt to work out what triggered the rash, medics carried out tests for HIV, herpes and other skin conditions — but the results all came back negative.

They have put Sarah on steroids which are helping the blisters heal. 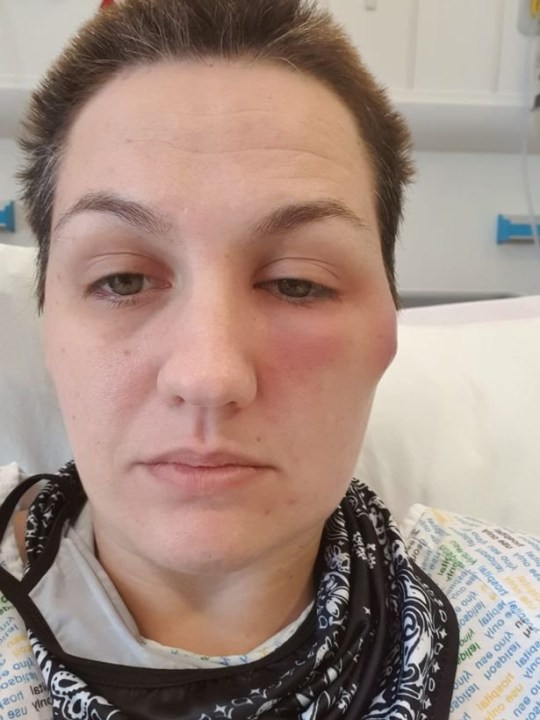 Sarah also developed an abscess on her face (Picture: Mirrorpix)

Sarah said: ‘I’m currently using a wheelchair as well just because I can’t walk with my legs getting bandaged up every day and the blisters on the soles of my feet.

‘At one point, I was sitting there thinking, “Am I going to have my legs amputated?” because I didn’t know what was going on and obviously this is new to the hospital staff as well.

‘I was in the Queen Elizabeth University Hospital and I could not fault that hospital one bit. From the domestics to the consultants, everyone was absolutely fantastic with me. I couldn’t have asked for better care.’

She said that vaccines are designed to activate the immune system, and sometimes a dramatic activation can manifest in the skin.

An NHS Greater Glasgow and Clyde spokesperson added that it was normal for vaccines to cause potential side-effects, but that these ‘need to be continuously balanced against the expected benefits in preventing illness’.

More than 33million Britons — or three in five adults — have already received at least one dose of a vaccine.

At least 20 million have had AstraZeneca’s jab — which drug regulators say causes a rash in 0.1% of cases.

Most of the time these will got away on their own, with blood filled blisters listed as an even rarer side effect that people should seek medical advice for.

It comes as new figures show just 32 people have been hospitalised with Covid after having the vaccine.

Deaths have also gone down since the vaccination programme started taking off in January.

On the country’s deadliest day of the pandemic, January 20, there were 1,296 fatalities.

Yesterday 22 people died within 28 days of testing positive for the virus.