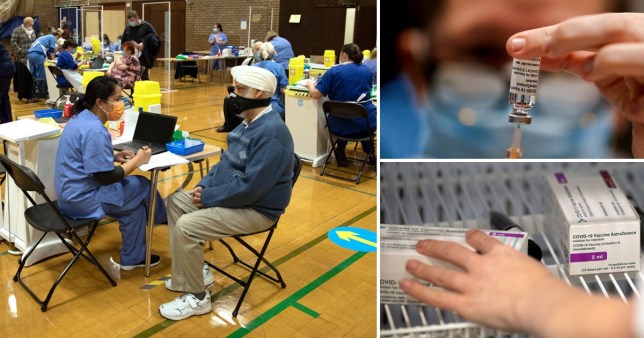 9.6 million people in total have now had either one or two doses of the coronavirus vaccine (Picture: Getty Images / Reuters)

The total number of coronavirus vaccines administered in the UK has passed 10 million, Government figures show.

Matt Hancock said he is ‘confident’ the country will hit its target of offering the top four priority groups at least the first jab by February 15 – which is some 15 million people.

‘We’ve now protected almost nine out of every 10 people over 80 and half of people in their 70s, and I’m delighted that we’ve been able to visit every eligible care home, 10,307 in total,’ the health secretary told the Commons earlier today.

The UK recorded another 1,449 deaths from coronavirus today, bringing the official death toll to 108,013.

A total of 16,840 new cases have been reported in the past 24 hours, which is a massive fall from the daily case numbers of up to 68,000 recorded early in January.

Exactly 3,852,623 infections have been recorded in the country since the pandemic first hit. 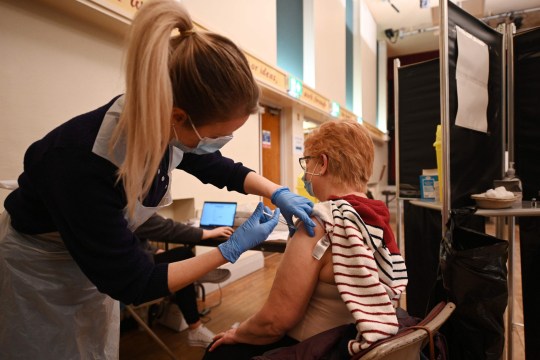 Matt Hancock said he is ‘confident’ the country will hit its target of offering the top four priority groups a Covid-19 vaccine by mid-February (Picture: AFP via Getty Images) 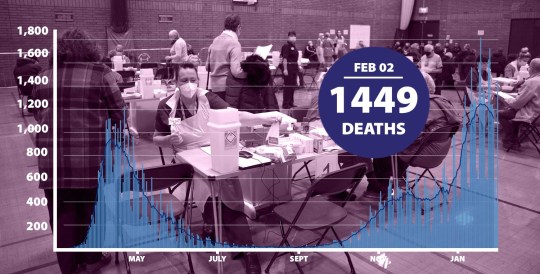 The UK recorded another 1,449 deaths from coronavirus today (Picture: Metro.co.uk)

It comes as the nation mourns the death of Captain Sir Tom Moore today.

It was announced earlier the much-loved veteran has died from coronavirus aged 100.

In a statement, Captain Tom’s daughters Hannah Ingram-Moore and Lucy Teixeira said: ‘It is with great sadness that we announce the death of our dear father, Captain Sir Tom Moore.

‘We are so grateful that we were with him during the last hours of his life; Hannah, Benjie and Georgia by his bedside and Lucy on FaceTime.

‘We spent hours chatting to him, reminiscing about our childhood and our wonderful mother. We shared laughter and tears together.

‘The last year of our father’s life was nothing short of remarkable. He was rejuvenated and experienced things he’d only ever dreamed of.

‘Whilst he’d been in so many hearts for just a short time, he was an incredible father and grandfather, and he will stay alive in our hearts forever.’

The NHS, the prime minister and Buckingham Palace have led the way in paying tribute to the war hero and NHS champion, who has raised more than £32 million for the NHS since the start of the pandemic.

Mariah Carey Sued by Sister Alison Over ‘Meaning of’ Memoir