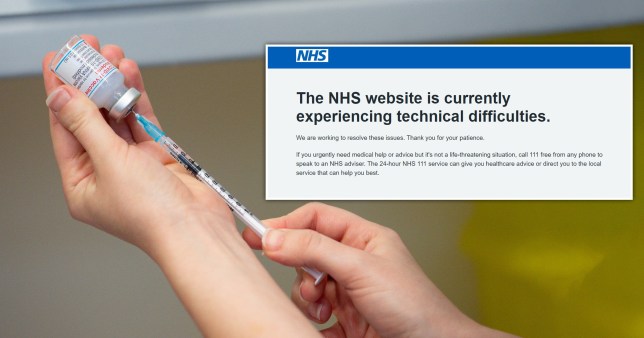 People over the age of 45 have been urged to book their jabs online (Picture: Reuters/NHS)

The NHS website has crashed moments after over-45s were invited to book their Covid vaccines online.

Visitors are met with an error message saying the site is experiencing ‘technical difficulties’.

Until now the NHS in England had offered vaccines to those at highest risk, including people over the age of 50 and people deemed to be ‘clinically extremely vulnerable’.

The age range has been lowered again from today after the Government achieved its goal of offering a first dose to the nine most vulnerable groups – including the clinically vulnerable and health and social care workers – three days ahead of its target date of April 15.

Last night Downing Street revealed all people age over 50 have now been offered a first shot, which Boris Johnson hailed as a ‘hugely significant milestone’.

It signals ‘Phase 2’ of the vaccination rollout – which will mean offering jabs to healthy adults under the age of 50. 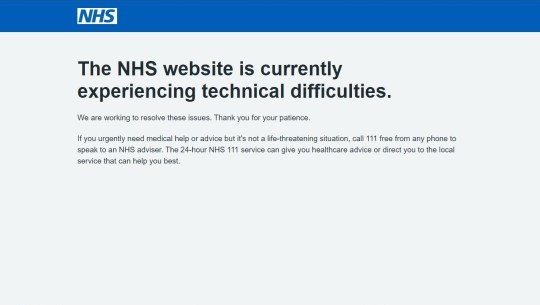 Users hoping to book their Covid vaccines this morning have been met with this message (Picture: PA) 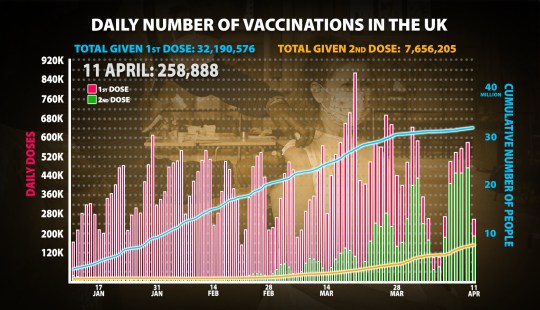 Daily vaccinations in the UK up to April 11 (Picture: Metro.co.uk)

But as many people went to book their vaccines this morning, they were met with an error message saying: ‘The NHS website is currently experiencing technical difficulties.

‘We are working to resolve these issues. Thank you for your patience.’

Other visitors said they were put in a queue, with a holding screen, reading: ‘You are in a queue. Lots of people trying to book an appointment.’

As well as the age range being lowered, the Moderna vaccine will be given to NHS patients in England for the first time from today.

It has already been rolled out in Wales and Scotland and is expected to be used in Northern Ireland in the weeks ahead.

Professor Stephen Powis, medical director for NHS England, said the introduction of the third jab – after the Pfizer and Oxford injections – to the country’s vaccination programme ‘marks another milestone’ in the fight against the pandemic.

Nearly 40million doses of the Pfizer and AstraZeneca vaccines have been administered since the rollout began in the UK in December, including 32million first jabs and more than seven million second doses.

The Joint Committee on Vaccine and Immunisation (JVCI) is expected to set out its final advice for completing the programme this week.