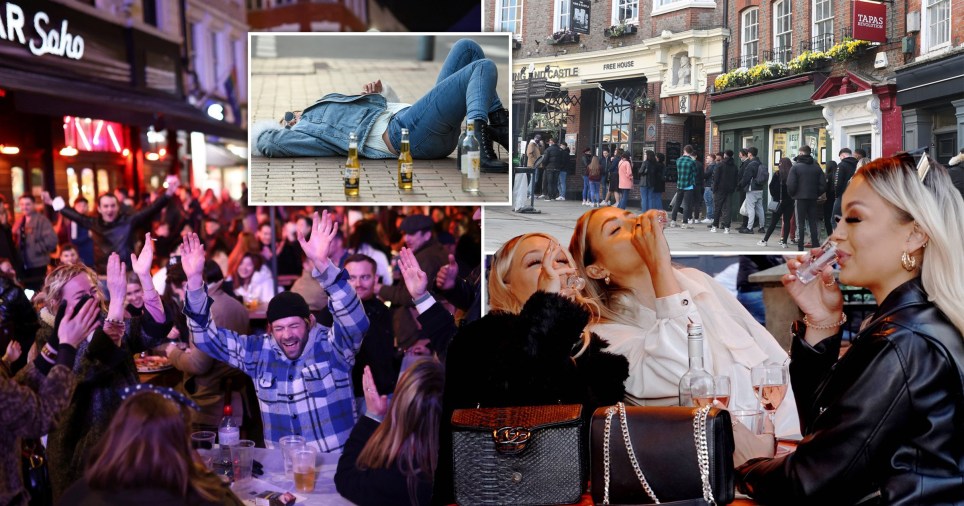 Pubs across the country are packed as Brits make the most of their first weekend of freedom (Picture: North News and Pictures/ AFP/Snapper SK)

There were messy scenes on Friday night as merry Brits made the most of their first weekend of freedom since lockdown eased.

Millions flocked to their favourite local on what has being dubbed ‘Fab Friday’.

The nation is expected to knock back a staggering five million pints and 500,000 bottles of wine tonight as pubs across England brace themselves for the biggest night out in six months.

Experts predict the hospitality industry could rake in £100 million from the boozy antics.

Across England, revellers showed their joy at being able to enjoy a night out as they took to the streets.

People were seen dancing in Leicester Square after one boozer brought along huge speakers to entertain the crowds. 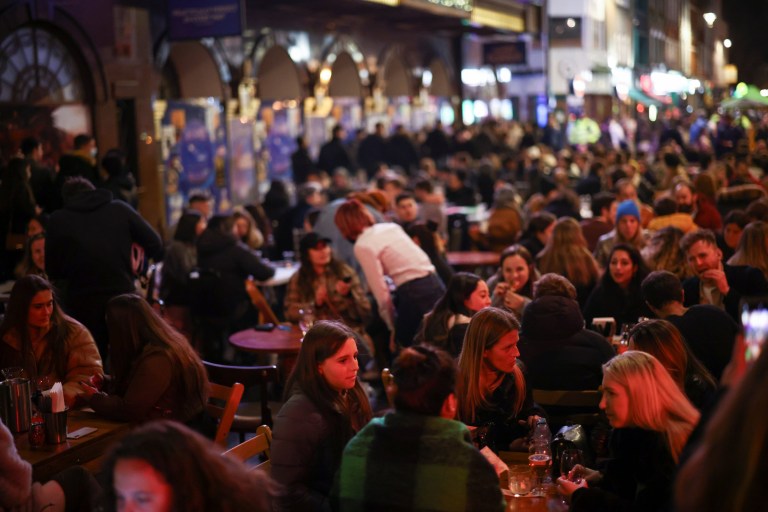 London’s Soho looking busy on the first Friday out of lockdown (Picture: Reuters) 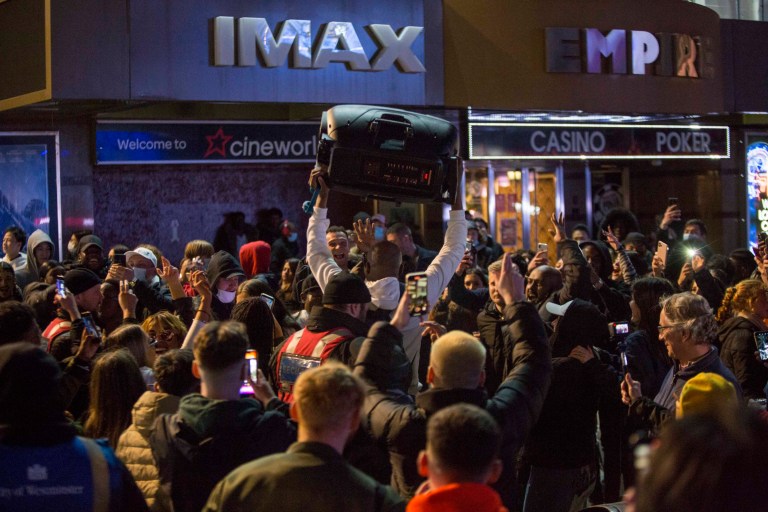 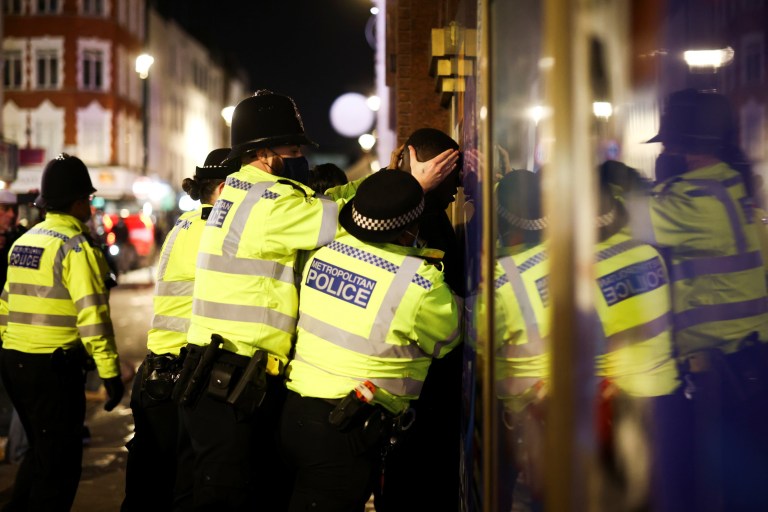 There was a heavy police presence with police pictured making arrests in Soho (Picture: Reuters) 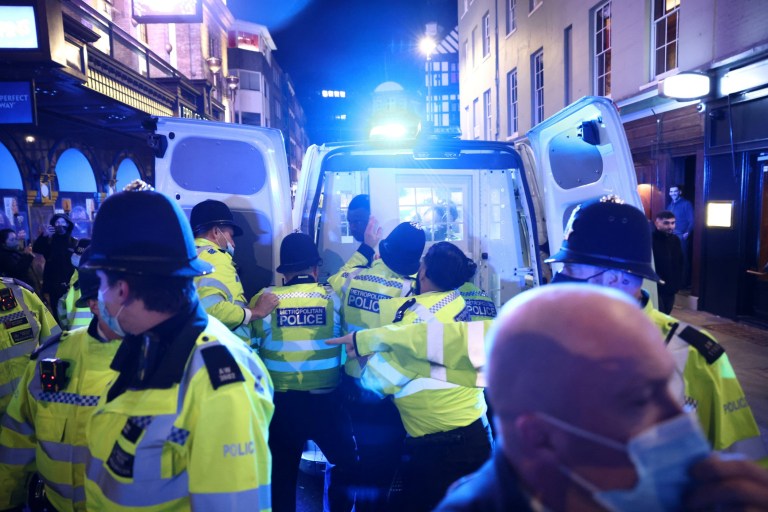 Hundreds also flocked to nearby Soho, which has been pedestrianised to create more outdoor space to allow pubs and restaurants to reopen.

While there was generally good spirits all round, images showed police making some arrests.

Revellers squared up to each other in Soho as a row broke out reportedly over table reservations, according to the Daily Mail.

Police have warned they will be stepping up patrols in busy areas to make sure there is no trouble and people abide by social distancing.

Some people looked worse for wear after a day of boozing. 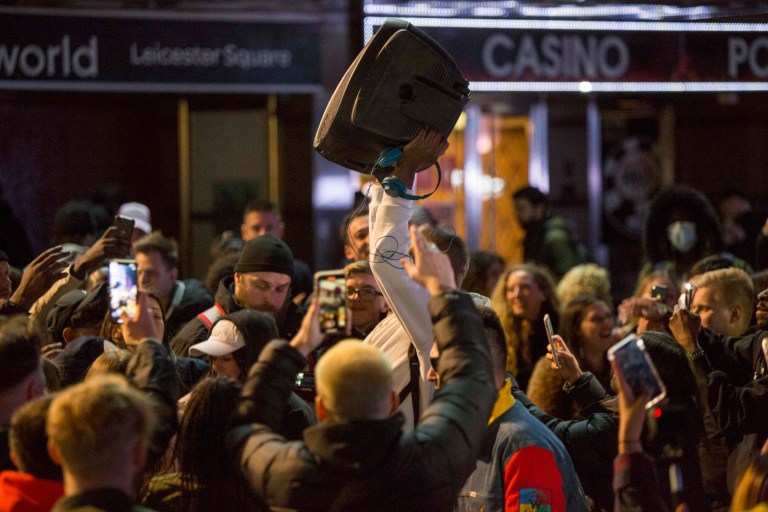 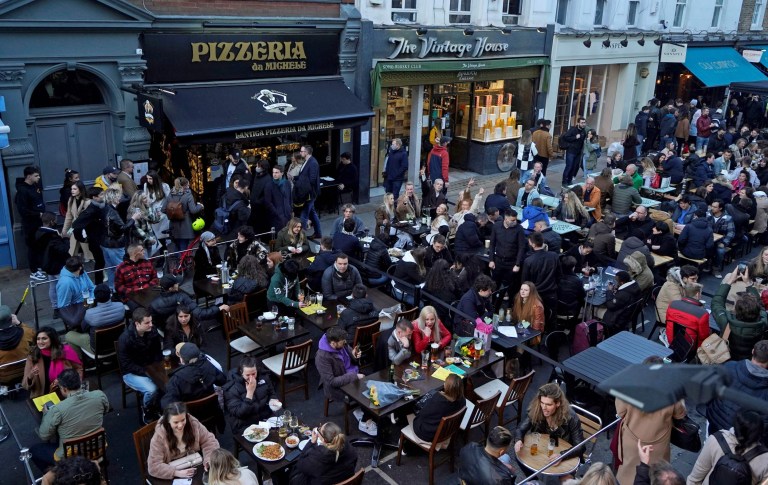 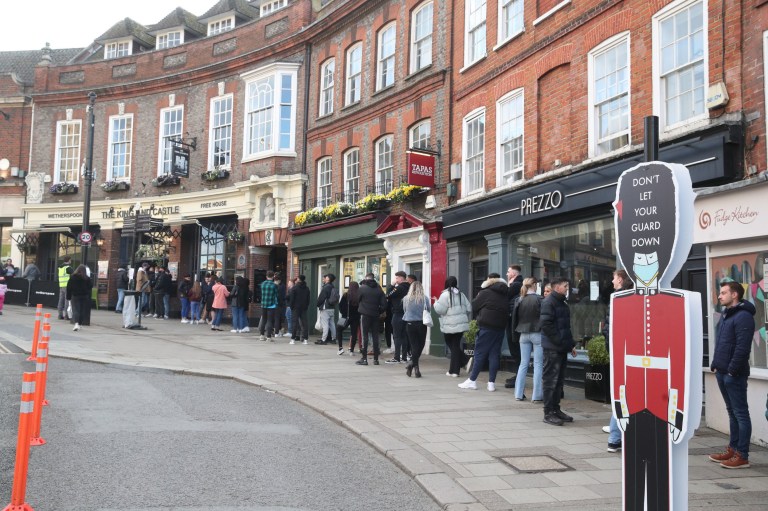 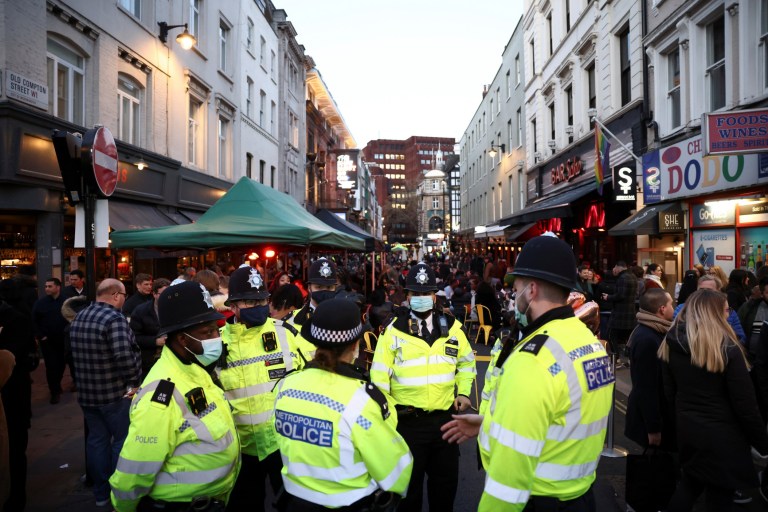 Many queued from early in the morning to secure a coveted reservation amid limited capacity due to the outdoor rule.

A two hour queue formed at the Quayside Wetherspoons in Newcastle earlier in the evening.

A massive queue also formed outside the Wetherspoon’s King and Castle pub in Windsor.

Already this week, Brits have been wrapping up warm to return to their beloved boozers, with some pictured sitting in the snow enjoying their first freshly poured pint in months.

Under current rules, people must remain seated outdoors while eating and drinking and are limited to groups of no more than six people or two households. 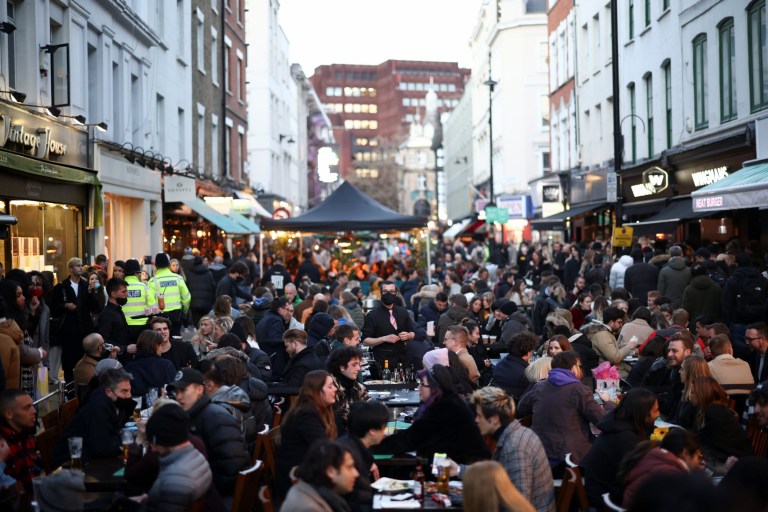 Brits are expected to down half a million pints tonight (Picture: Reuters) 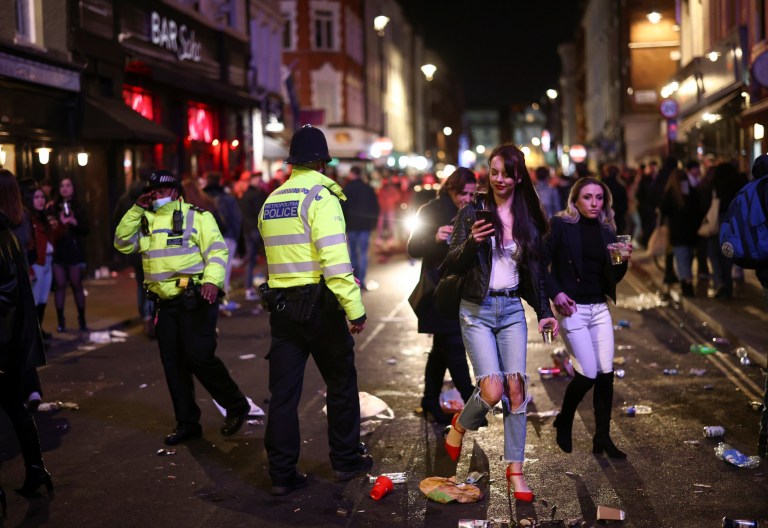 There were messy scenes with many busy streets piled with litter (Picture: Reuters) 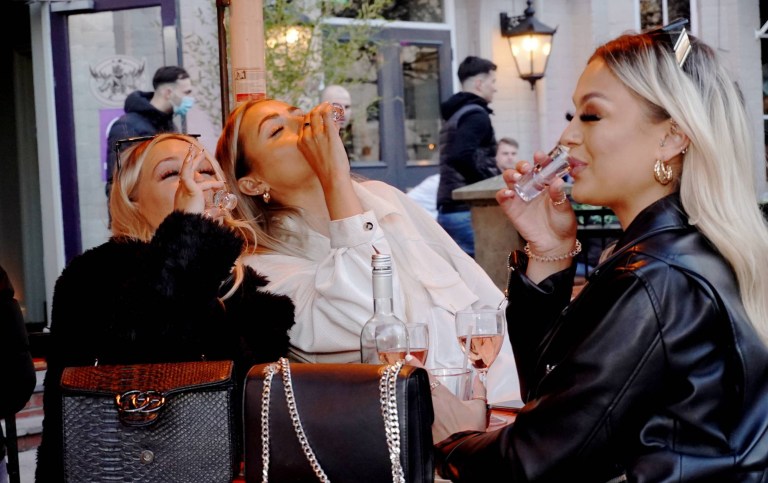 Friends in Newcastle enjoy an outdoor drink on the first Friday of pubs being open (Picture: North News and Pictures) 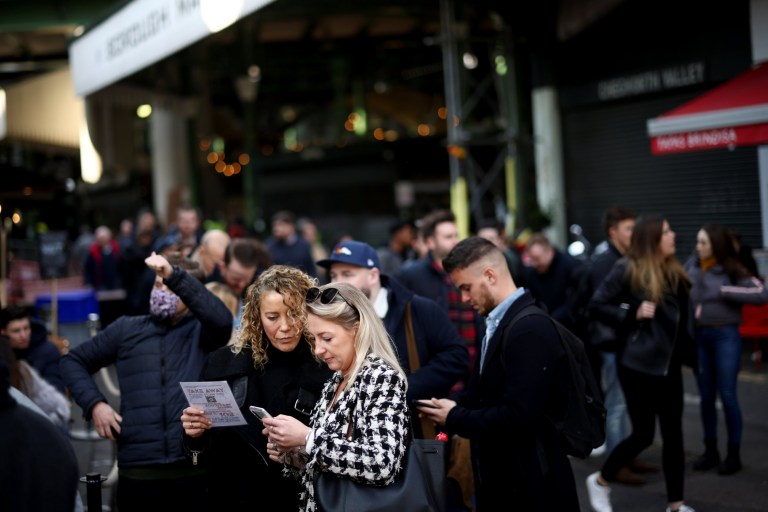 ‘Fab Friday’ could rake in £100m for the hospitality industry (Picture: REUTERS) 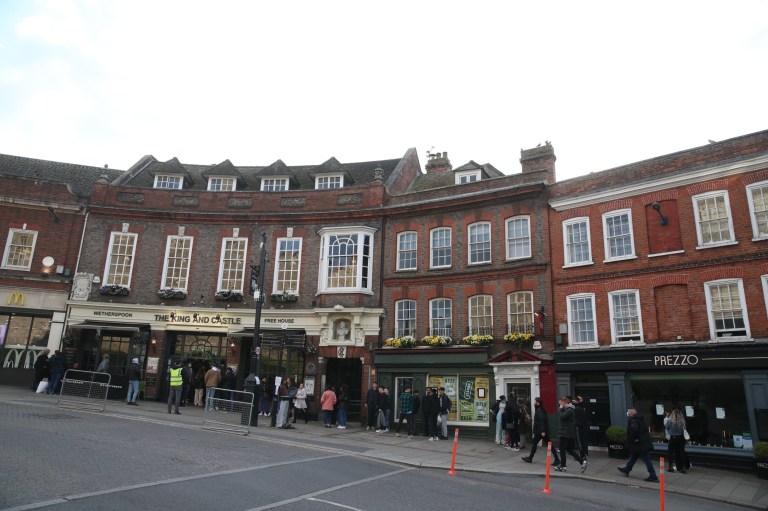 A massive queue snakes outside a Wetherspoons in Windsor (Picture: PA)

A number of local authorities have brought back Covid marshals to help enforce social distancing rules as excited Brits return to the streets.

Newcastle Police said: ‘Our officers are out across the city to night to help make sure you have a safe and fantastic time, catching up with family and friends. Remember your keys, money, phone and your coat to get you home! Don’t forget to say hello to the team!’

Met Police Deputy Assistant Commissioner Jane Connors said: ‘I must stress that we remain in a public health crisis and gathering in large numbers presents a real risk of transmitting Covid-19. 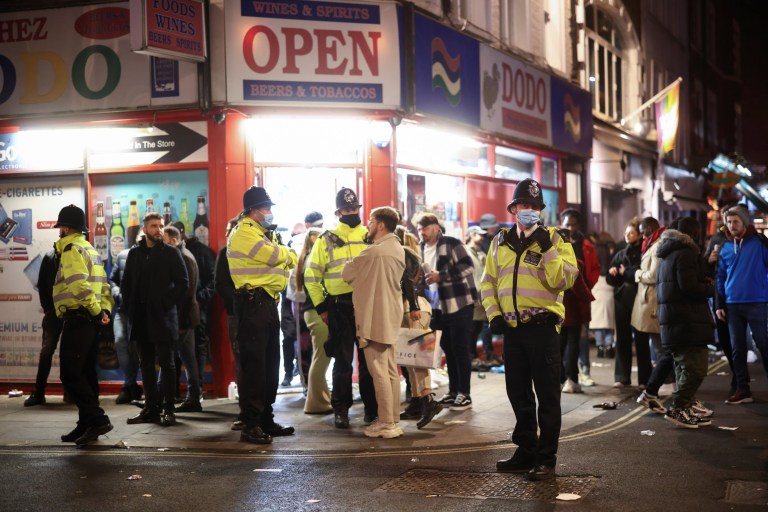 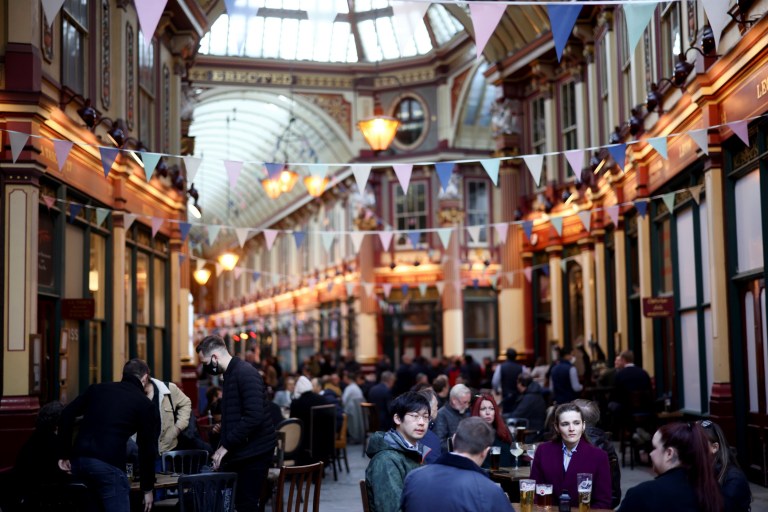 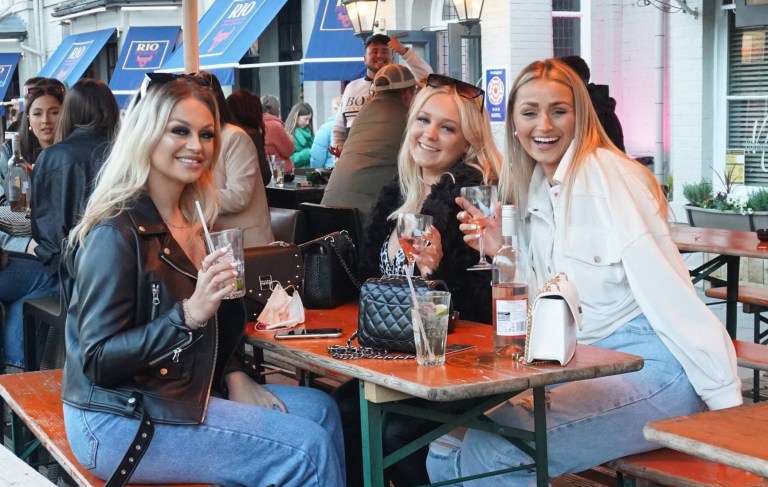 The were cheerful scenes in pubs across the country (Picture: North News & Pictures) 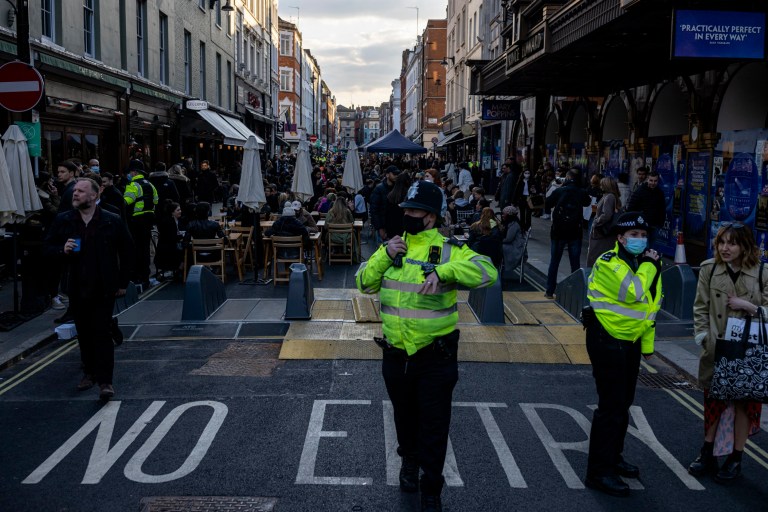 Brits are expected to come out in their thousands (Picture: Getty) 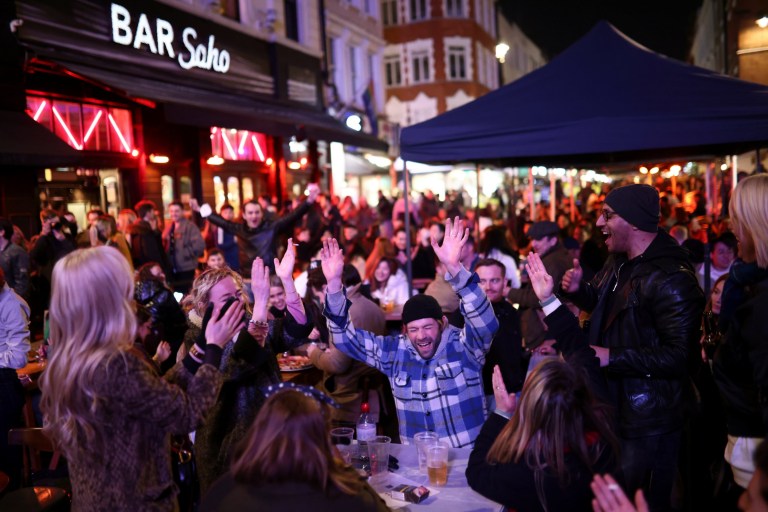 Cheerful scenes on the terrace of a bar in Soho (Picture: Reuters)

‘While restrictions have recently eased, we need only look at what is happening now in some parts of Europe and our own recent experience to see how quickly things can change.’

The cheerful scenes come amid promising data the virus in the UK is slowing.

Infection levels are at the lowest level since autumn, the R rate has dropped to 0.7 and one in six adults have now had both vaccine doses.

But people are being urged to remain vigilant amid fears new variants could jeopardise the roadmap out of lockdown.