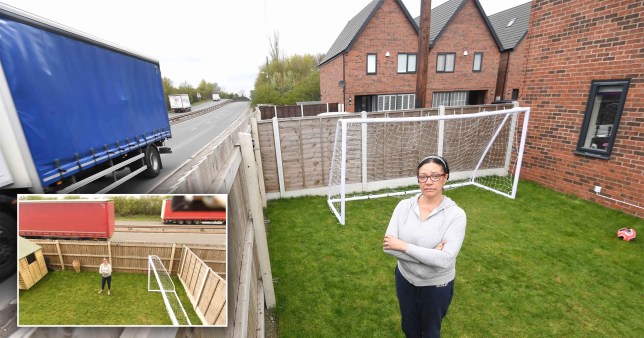 Jackie McCormack, 58, said she feels like she is ‘living next to a motorway’ (Picture: BPM Media)

A mum has spoken of her hellish experience after moving into her ‘dream’ new-build home – to find it was more of a nightmare.

From the house feeling like it is shaking every time a lorry passes, to having to wear earplugs to bed and constantly having to clean due to pollution, Jackie McCormack feels like she is ‘living next to a motorway’.

When she and her husband viewed the £350,000 three-bedroom house in Coleshill, Warwickshire, she said it was at quieter times when they did not notice the noise.

But she said as soon as they moved in the couple were affected by constant rumbling and pollution, and they even have to wear earplugs to sleep at night.

Jackie, 58, said: ‘We moved in on the Friday and on Saturday it was absolutely horrendous.

‘I didn’t realise there was an injunction regarding boy racers on the A446, they don’t take any notice of it. They started at 11am on the Saturday and went right the way through to 4am on Sunday, hitting speeds of 90 to 100mph.

‘On the Monday, it started with the heavy good vehicles – my house was constantly shaking. You don’t get any respite at all, it’s relentless. It’s like living next to a motorway.’

She explained the couple had initially put an offer in on a four-bedroom house on the same estate priced at £375,000, but jumped at the opportunity when this three-bed came up for £25,000 less. 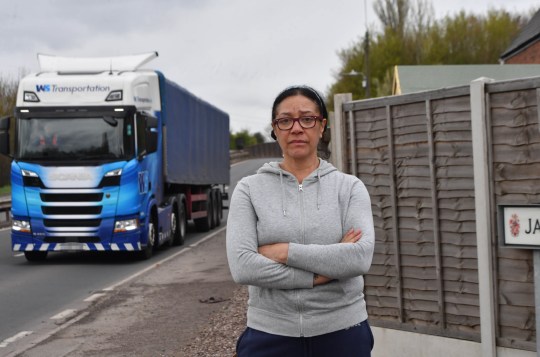 When the couple viewed the house in Coleshill, Warwickshire, Jackie said it was at quieter times when they did not notice the noise (Picture: BPM Media)

They had six or seven viewings of the house, which is closer to the road – but only on Saturday mornings ‘before the road wakes up’.

‘Before we moved in we had several viewings that all took place on a Saturday morning which all meant that the road was relatively quiet. We absolutely fell in love with the house,’ she said.

‘It’s a beautiful property. But I think because it was so close to the road, no wonder they dropped it by £25,000. Anyway, we went out and had a look at it on a number of occasions, absolutely beautiful, we moved in and it all started from there.’

Jackie said she didn’t think they were ‘duped’ by the estate agents, but was shocked that the planners had obtained permission to build so close to a busy road.

She added dust from the pollution falling onto their cars, windows and into their brand-new white en-suite is also a huge issue. 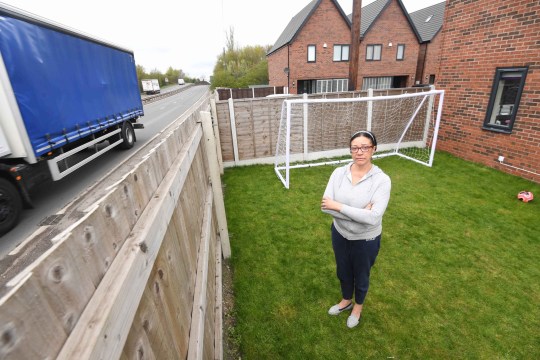 She said they are affected by constant rumbling and pollution, and they even have to wear earplugs to sleep at night (Picture: BPM Media) 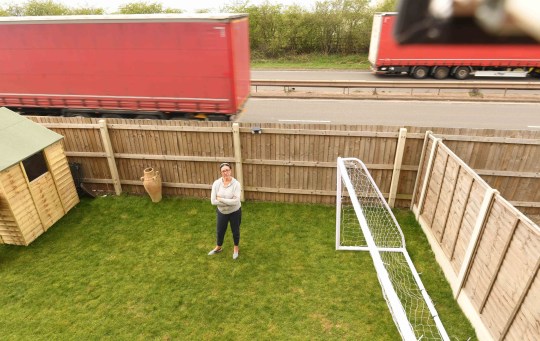 She is now calling for the council to take action over the road (Picture: BPM Media)

‘The HGVs are absolutely horrendous, and the pollution that comes out of them, it’s disgraceful,’ she said.

‘I’m washing my windows three or four times a week, it’s disgusting. If the pollution is going onto our windows and our cars, what are we breathing in?’

She said her garden is a ‘no-go area’ and won’t let her grandson play there due to the speed of the cars zooming past constantly.

Jackie has now called for the speed limit to be dropped, some speed cameras and crash barriers to help improve the situation for her and her neighbours.

‘I’m going to fight to the nail to get this sorted out. I’m not moving, I can’t move because nobody would buy the house,’ she said.

‘They’ve said they haven’t had any crashes in years, but I’m not prepared to take that risk. They have to reduce the speed, they have to.’

Warwickshire County Council said it is aware of the problems and is arranging a meeting to discuss solutions.

A spokesperson said: ‘A meeting is currently being arranged with various stakeholders to discuss this.

‘Obviously, there is no guarantee that it will be possible to provide any measures, but we will consider the issues raised very carefully and aim to recommend possible solutions.’