Council meeting abandoned after descending into chaos with police called

Police swooped on a stuttering district council meeting where one representative repeatedly shouted ‘Point of order’ and called the chairman a coward.

Councillor Chrisy Morris was accused of attempting to disrupt Thursday’s meeting of Maldon District Council in Essex as sanctions against him were discussed.

The independent councillor had been found to have bullied council members and disclosed confidential information.

Mr Morris, who brought a megaphone to the meeting, clashed with chairman Mark Heard as he disputed the findings of two reports into his behaviour.

He called Mr Heard a ‘coward’ and said: ‘At least I have got the testicular fortitude to sit here and speak my truth.’

As councillors attempted a vote to remove him from the chamber, Mr Morris replied: ‘You can’t make me, you idiots.

‘You can’t make me leave the meeting – I’m democratically elected.’

Mr Morris, who was banned from attending all committees, working groups and outside bodies for 12 months, had his ban extended to 18 months after a vote. Currently, he does not sit on any.

Police officers attended and one told him: ‘You are breaching the peace by not allowing this [meeting] to continue.’

But Mr Morris replied: ‘I won’t cease this behaviour – you have no authority over me.

‘You guys shouldn’t be getting involved in politics.’ 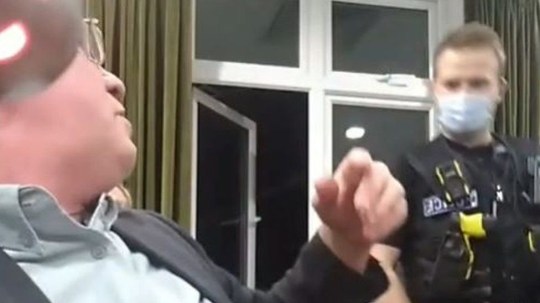 The meeting was abandoned after police officers were called (Picture: Youtube/Maldon District Council)

No arrests were made.

She said: ‘The public may be seeing Councillor Morris’ disruptive behaviour for the first time, but this has been a regular occurrence and we cannot tolerate this type of behaviour any longer and put members and staff through any further distress.

‘Councillor Heard was concerned for the duty of care of staff present who have continued to be the target of aggressive, intimidating behaviour from Councillor Morris.’ 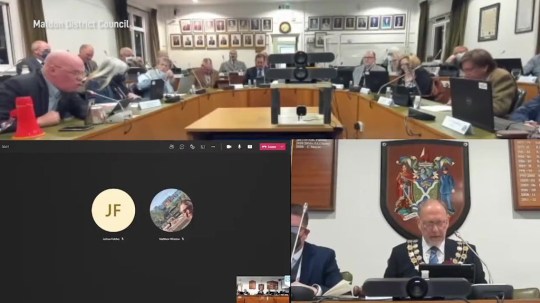 The episode has echoes of a February meeting of Hanforth Parish Council held via Zoom.