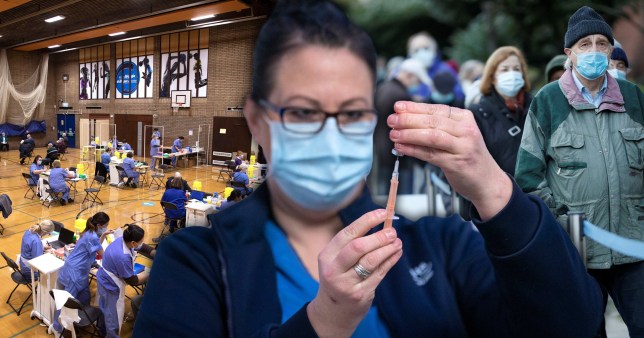 Discussions are ongoing as to who should be next in line (Pictures: PA/Getty)

Adults not included in the initial priority groups for the Covid-19 vaccine should find out when they can expect to receive the jab in the next few weeks, one expert has said.

The Joint Committee on Vaccination and Immunisation (JCVI) is currently in discussions over who they believe should be next in line.

Professor Adam Finn, a member of the JCVI, said plans will be set out by the end of February or early March.

According to the Government’s vaccines delivery plan, some 32 million people across the UK are estimated to fall into the top nine priority groups. There are 52.7 million people aged 18 and over in the UK.

Asked who would be next to be vaccinated, Professor Finn told BBC Breakfast: ‘That discussion is ongoing at the moment and of course it goes beyond just medicine and public health as to who society values most and who they think are most important.

‘In terms of the JCVI, we’re very focused on the evidence of who’s at the highest risk and at the moment the outstanding factor predicting that is still age.

‘And of course you need a system that you can operationalise, so you can identify the people and quickly get the vaccine to them.

‘So I can’t give you an answer to exactly how that will look.

‘But over the coming few weeks we’re making those plans and I think they will have to be announced by the end of February or early March so that we know what we’re doing next.’ 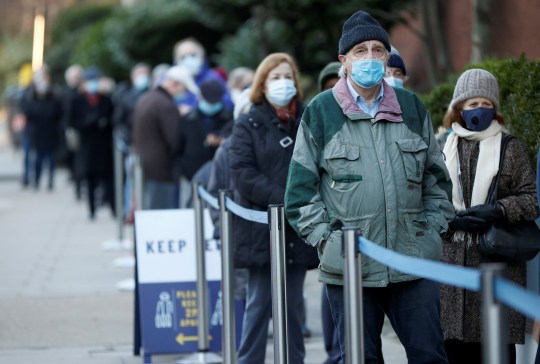 People wait in line to get their jab at Lord’s Cricket Ground (Picture: Reuters)

Meanwhile, Prof Finn encouraged people to get the jab as soon as they are offered it after questions were raised about the vaccines’ efficacy against new variants, including the South African strain.

Professor Finn said the vaccines are effective against strains of the virus which are dominant in the UK. But he also warned it could take a few months to adapt them to tackle emerging variants.

He said: ‘It will take some time, simply because although the new variants can be adjusted in the vaccines they then have to come through the regulators, and then have to be manufactured at scale in order to be available.

‘So it’s not a matter of a month or two, it’s probably more than that.

‘But we currently have vaccines that are effective against the strains that are predominating in the UK and that should be clear in everybody’s minds, that we’re not in a position where vaccines have suddenly stopped working entirely.’ 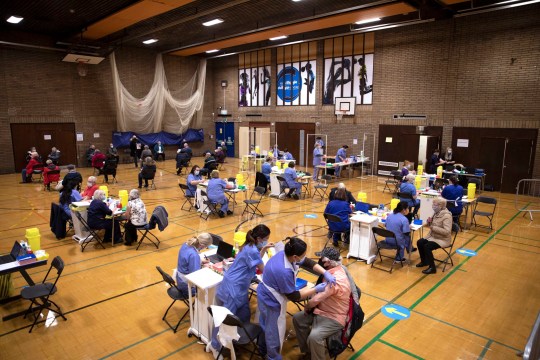 People getting vaccinated at the Newbridge Leisure Centre gym in Wales (Picture: Getty)

Professor Finn added: ‘There is a position in South Africa, not actually just with the Oxford vaccine but with all the vaccines, that a strain has evolved which is relatively more resistant to the vaccine immunity.

‘The strains that predominate in the UK at the moment are still highly efficiently prevented by the vaccines that we’ve got and we should really continue to move forward and use those vaccines as fast as we can to get an impact on hospitalisations.’

Professor Finn said the call to ‘go back to normal’ was ‘false’, adding that people should be prepared to modify their behaviours to limit the spread of the virus as we ‘learn to live with it’.

Asked whether the vaccination programme could be similar to the annual flu jab, he said: ‘I think that is the likely outcome. I think it’s much less likely that will completely eradicate this infection and it’ll just disappear.

‘I think it’s more likely it’ll evolve, we’ll kind of learn to live with it. I think we will continue to need vaccines and actually I think we will also probably have to modify our behaviour more broadly, long-term to try and reduce transmission of this and actually other infections as well.

‘So the constant call to go back to the normal is probably a false one and I think we’re going to have to now live going forward with the reality of viral infections and and making an effort to avoid passing them around.’