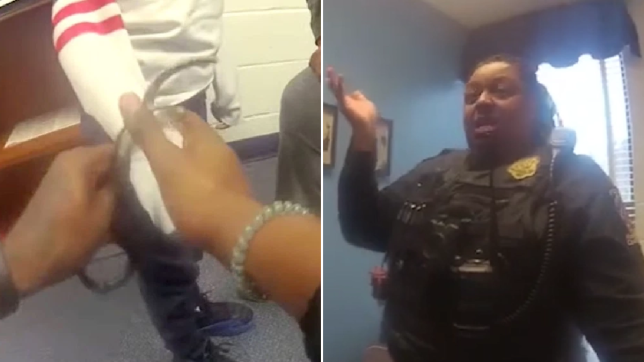 Two police officers handcuffed a five-year-old kindergarten student and scolded him by saying that his mother should ‘beat him’ for his bad behavior. The officers, Kevin Christmon and Dionne Holliday, referred to the child as a ‘little beast’ as he cried hysterically and coughed in the back of their cop car.

The kindergartner wandered away from his school, threw a basketball at a teacher and knocked over a computer in January 2020. Body camera footage released by the Montgomery County Police Department on Friday showed the cops grabbing the boy by his arm and yelling that he was too young to make his own decisions.

Christmon asked a school employee if the boy had ‘special needs’ after strapping him to the back seat. The officer said, ‘Don’t nobody want to hear that,’ and, ‘Ain’t nobody listening,’ as they drove to the school.

The footage also showed the officer giving the boy’s mother advice on disciplining him when she arrived at the school.

‘We want you to beat him,’ one of the cops said.

The mother replied that she did not want to go to jail for abusing her child, which prompted a cop to incorrectly say, ‘You don’t go to prison for beating your child.’

School superintendent Jack Smith and school board president Brenda Wolff said in a joint statement that the video was ‘extremely difficult’ to watch.

‘Our heart aches for this student,’ they stated. ‘There is no excuse for adults to ever speak to or threaten a child in this way.’

A spokesperson for the police department said that Christmon and Holliday are still employed in the force following a confidential investigation.

The Circle: Gladiators’ Hunter in danger as Andy and Manrika named influencers