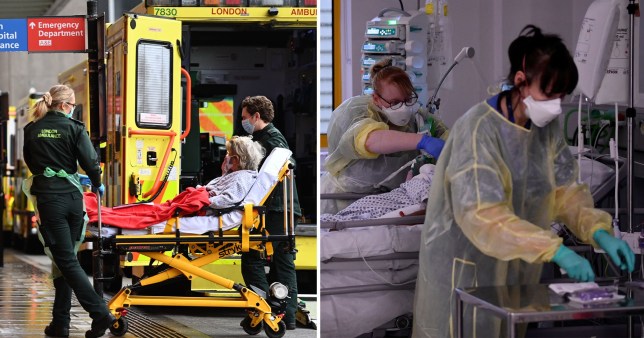 Experts have said it will take years not months to get waiting lists back to pre-pandemic levels (Picture: EPA/Reuters)

A hospital chief has warned it may take up to three years to get NHS waiting lists back to pre-pandemic levels.

Professor David Loughton, chief executive of the Royal Wolverhampton NHS Trust, said clearing the backlog of patients waiting for procedures which have stacked up while tackling the Covid-19 pandemic is now a priority.

Figures out last week showed that the number of people in England waiting to start hospital treatment had risen to a record high. Some 4.59 million people were waiting to start treatment at the end of January, the highest number since records began in August 2007.

Professor Loughton said ‘waiting lists are back to where they were in the early 2000s’ as a result of redeploying vast resources to fight the coronavirus pandemic.

He said that in his trust of 10,500 staff alone, they had had to cancel all general surgery at one site, redeploy its staff and boost intensive care capacity by ‘300%’ to cope with the virus’s peaks.

The health chief added that ‘things are looking good’ as numbers of Covid in-patients have dropped significantly since January, but other NHS patients have been left ‘suffering’ as operations and procedures had to be cancelled.

Professor Loughton said the trust, which runs Wolverhampton’s New Cross Hospital, is now ‘in the period’ of restoring services like general surgery to its other site, Cannock Chase Hospital in Staffordshire, but it will take time to get on top of waiting list numbers.

He said: ‘I think realistically you are talking about two maybe three years to get back to previous levels because NHS waiting lists are now at a very, very high level and it will take time to restore that.’ 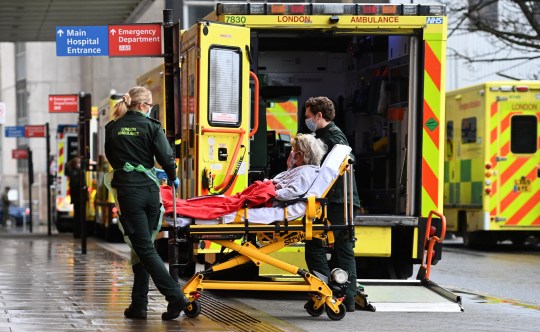 Ambulance staff transport a patient outside the the Royal London hospital in London (Picture: EPA)

The professor said it is ‘right to share with the public how long it is going to take us to restore these services’, and he will share the trust’s ‘modelling’ of how it intends to handle backlogs, along with timescales, in due course.

‘But if you’re waiting for a (replacement) hip or a knee or something, you’ll be waiting in pain and discomfort.’

Mr Hopson said it was uncertain at the moment how big the treatment backlog would be as staff were still dealing with coronavirus. 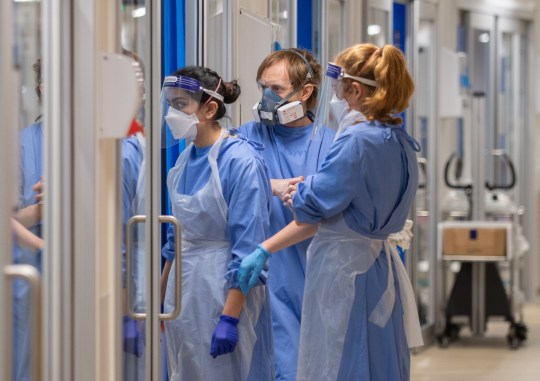 Staff check on patients suffering with Covid-19 on the critical care unit at the Royal Papworth Hospital (Picture: PA)

He added: ‘The NHS will obviously go as fast as it can, as we always do. But it’s already apparent that clearing the entire backlog will take years rather than months.’

Mr Hopson said the next ‘real question’ would be about who is prioritised for care.

He went on: ‘The NHS is obviously now concentrating on the most urgent cases that had to be delayed for a few days or weeks as a result of the last phase of the pandemic. Trusts are making good and rapid progress here.

‘Longer term, there will inevitably be pressure to prioritise those who have waited more than a year as the size of increase here is getting the most media and political attention.

‘But trust leaders want to avoid a simplistic approach that only focuses on those who have waited longest.

‘We know there will be people who have greater clinical need – people whose lives could be permanently scarred by serious long-term illness or who would never be able to go back to work – who will not be in the 52-week plus category.

‘So we need sophisticated prioritisation based on local clinicians’ judgments, rather than being led by what politicians or some in the media are saying about people waiting more than 52 weeks, important though all of these cases are.

‘The NHS has always prioritised treatment on the basis of clinical need and we shouldn’t allow the way we measure waiting lists divert us from this approach in this new situation.’

NHS England data shows there was a 54% drop in the number of people admitted for routine treatment in January compared with a year earlier.

After my sister’s death at 31, I want to breakdown myths about cancer