As one autocratic government tries to expand its territory in Ukraine, another raises suspicions it intends to do the same in Taiwan.

Chinese premier Li Keqiang has reaffirmed that the government believes in the ‘reunification’ of the island nation with the mainland.

He said Beijing will look to ‘advance the peaceful growth of relations across the Taiwan Strait’ but Western governments are increasingly concerned about military maneuvers by China.

There has been an increase in activity near the island over the past two years, including naval drills off its coast and regular military aircraft sorties through its airspace.

Beijing has long had ambitions to reunite the two but there is fierce opposition from Taiwan.

The Chinese premier also accused the West of meddling in the area, echoing charges levelled by Vladimir Putin in the build up to his war. 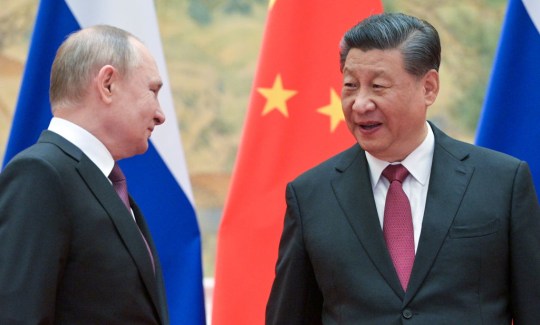 The leaders of Russia and China met in Beijing days before the invasion of Ukraine began (Picture: TASS – image release by Kremlin)

‘All of us, Chinese on both sides of the Taiwan Strait, should come together to advance the great and glorious cause of China’s rejuvenation.’

Taiwan’s Mainland Affairs Council responded by saying China should focus more on addressing the real concerns of its people and promoting democracy rather than ‘undermining international rules and order’.

‘Democratic Taiwan is a force for regional peace and stability.’

The US’ new ambassador, Nicholas Burns, has arrived in Beijing to take up his post amid heightened tensions. 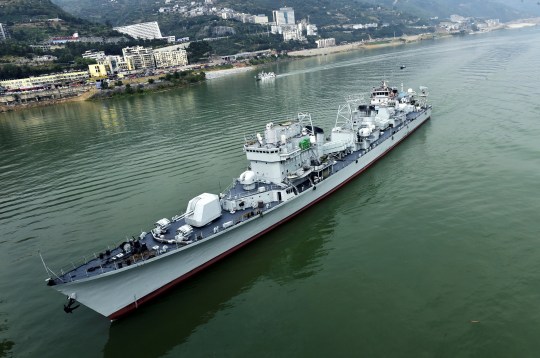 China has ramped up military spending and reaffirmed its commitment to the ‘One China’ policy (Picture: AFP)

He will undergo three weeks of quarantine at his official residence as China requires before travelling to the embassy.

Vladimir Putin traveled to China prior to the Ukraine war and signed a ‘friendship agreement’ with Xi Jinping, a sign of closer ties between the two countries.

Beijing has distanced itself from the war without criticising it and has pointedly refused to use the word ‘invasion’ in its statements, a move some analysts reflects thinking on territorial ambitions in Taiwan.

China has abstained on votes at the United Nations on sanctioning Russia and demanding the withdrawal of Russian troops.

It has also blamed the unprovoked Russian invasion on Nato’s eastern advance and a lack of attention to Russia’s security concerns.

However, there were signs of growing unease when China criticised Russian forces for shelling Europe’s largest nuclear power plant this week, with a senior official saying the government was ‘seriously concerned about the safety and security’.