Devastated members of Marvels and Meltdowns, based in Gosport, have been left picking up the pieces after co-founder and treasurer Tricia Lyons, 39, plundered the accounts.

The funds were intended to be used to assist 1,400 families of children with special needs in the area, but Lyons spent it on leisure and shopping sprees.

Portsmouth Magistrates’ Court heard the treasurer ‘abused her position of trust’ to siphon the money from the charity – which had previously supported her two autistic children – leaving it in financial ruin.

She was handed a 24-week jail term, suspended for one year, and was ordered to pay compensation after admitting the fraud.

Lyons, from Gosport, near Portsmouth, Hants, founded Marvels and Meltdowns in 2015 with ‘best friend’ Shandrika Day. 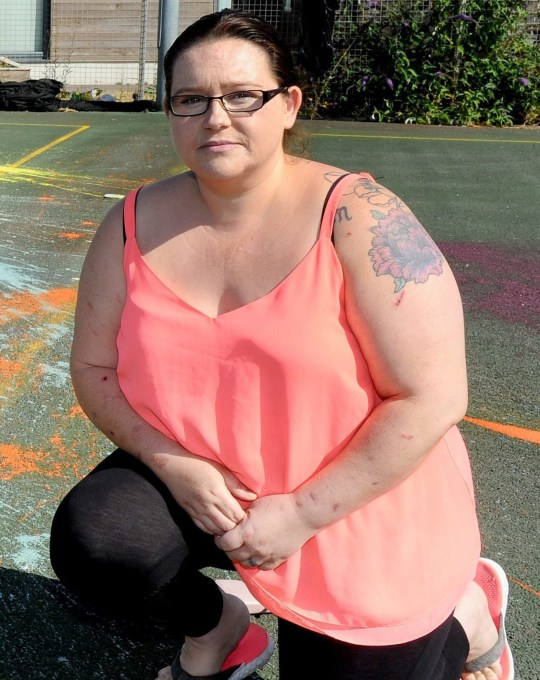 Tricia Lyons ‘abused her position of trust’ to siphon the money from the charity – which had previously supported her two autistic children (Picture: Portsmouth News/Solent News)

The women set up the specialist charity after noticing a lack of support for families with children diagnosed with autism and ADHD.

Lyons’ spending spree was discovered in March last year, after managers found discrepancies in the accounts of the charity.

At that time the charity provided support for around 1,400 families across the area but was left with just £500 in its accounts.

She splashed the cash on a fancy meal at a Japanese restaurant, £515 on ‘ice skating blades’, £190 on a Tesco shopping spree and even paid for a trip to theme park Alton Towers, in Stoke-on-Trent.

Lyons left her post at the charity she helped found ‘without explanation’ after being challenged about the missing money, and a police investigation was subsequently launched.

Lucy Linington, prosecuting, told the court: ‘Ms Lyons’ offence has had a catastrophic impact on the charity’s ability to attract future funding.

‘By way of example, a large local supermarket will have no dealings with this charity for some two years because one of the co-founders has a conviction for fraud.

‘There have been a lot of organisations who had been willing to work with this charity, but [who] following the last hearing have effectively now decided to walk away from supporting the charity.

‘Lyons has two autistic children, knowing fully the challenges autism creates for families and individuals alike – but she has still gone out and defrauded her own charity.’

Fellow founding member Shandrika Day revealed she was left heartbroken and an ’emotional wreck’ by her former ‘best friend’s betrayal’.

Speaking to the court as Lyons wept in the dock, the Marvel and Meltdowns co-founder blasted the crime as ‘one of the sneakiest and deceitful’ and ‘utterly disgusting’.

Calling for harsh sentencing, she said: ‘For such a long time I was just completely broken by the betrayal, I was an emotional wreck and struggling at home and at work mentally and physically.

‘Tricia was my best friend, or that is how I thought of her. It felt like everything we had built was just a big lie and meant absolutely nothing to her.

‘To this day I still feel like we are still living in the shadow of her stealing from the charity.

‘I am still in shock that she would choose to write cheques to herself paid.”

Lyons was sentenced to 24 weeks in jail, suspended for one year, and ordered to pay £2,429.39 in compensation, which covers cash not yet recovered by the charity.

After the case Marvels and Meltdowns insisted it would continue to support families.