Stefan Hincu, 52, was sentenced to 100 hours of unpaid work for groping an ambulance worker who was trying to help him (Picture: Getty)

A female NHS worker was left in floods of tears after a drunk man who she was trying to help sexually assaulted her.

Stefan Hincu, 52, was discovered ‘very drunk’, sat on the pavement of Greengate Street in Barrow, Cumbria on June 22 last year.

The shocking incident happened in the early hours of the morning after ambulance crew struggled to get him inside and were forced to call the police for assistance.

As the car wash worker stood at the back of the emergency vehicle, he reached out and groped the female paramedic’s breast.

South Cumbria Magistrates’ Court heard the victim cried straight after the assault and has since been left ‘upset’ and nervous about getting too close to patients.

Chair of the bench Charles Crewdson blasted his actions as ‘unacceptable’ and warned Hincu there will be no leniency in the future.

He said: ‘The paramedic has the right to come to work and not feel threatened by any one.

‘Your behaviour is entirely unacceptable. If you can’t control yourself with alcohol, do not drink. 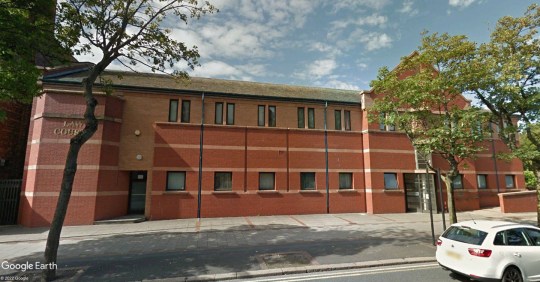 South Cumbria Magistrates’ Court heard the woman has since been left ‘upset’ and nervous about getting too close to patients (Picture: Google)

‘This appears to be out of character but if you are here again in front of this court there is no leniency.’

Hincu, who had no past convictions at the time of the attack, has now admitted sexual assault and apologised to the traumatised paramedic, who cannot be named for legal reasons.

Prosecutor Lee Dacre detailed how the victim was working with another colleague when they rushed to his aide.

Initially, the woman thought he was trying to shake her hand when he reached out his arm, and was left stunned when he brushed her breast.

‘Her colleague saw that and told him to keep his hands to himself’, the prosecutor added.

Louise Gordon, defending, said Hincu wanted to apologise to the victim and ‘accepts he had been drinking’.

She continued: ‘He says what he did was done in a moment of madness.

‘This is something he’s never done before and will never do again. He finds it difficult to explain his actions.

‘His behaviour was out of character and he’s ashamed to be brought before the court for such matters.’

Hincu was sentenced to 100 hours of unpaid work, ordered he pay his victim £100 compensation, a £95 victims surcharge and £200 costs.

I launched a powder to set fake tan in seconds