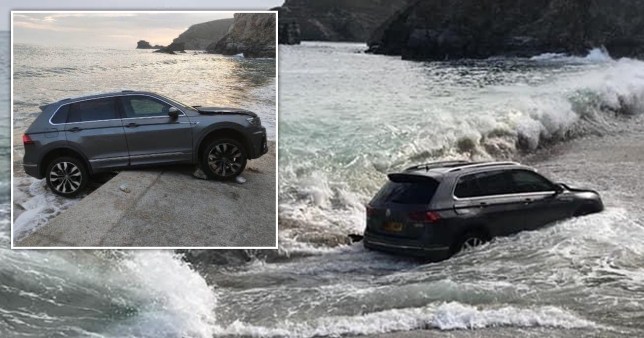 And the moral of the story is… (Picture: Backgrid)

A driver hopefully learned their lesson not to park their car close to the water’s edge when their car got washed away by the tide.

There may not have been double yellows on the slipway, but you’d have hoped that the proximity to the beach might have rung alarm bells.

Apparently, it did not – and the dark grey SUV had to be pulled from the water by the coastguard yesterday morning, after it started to float away.

The driver, believed to be a holidaymaker, had to watch their 4×4 vehicle lifted onto a recovery truck in St Agnes, Cornwall, at around 8.30am.

Posting about the incident on Facebook, St Agnes Coastguard Search and Rescue Team confirm it was called at 8.26am to Trevaunance Cove.

The Coastguard team wrote: ‘Tasked to a report of a car in the sea at Trevaunance Cove. Our attendance was requested to determine the safety of the owner/occupants.

‘Once on scene it was quickly established all persons were safe and accounted for.

‘Team stood down and returned to station.’

But locals in St Agnes were quick to slam the driver for his ‘stupidity’ in parking so close to the water’s edge.

Several people commented that ‘silly season’ has descended in Cornwall.

Another commented: ‘Welcome to Cornwall, upon entering leave your brain at the borders.’

And a third wrote: ‘What pilllocks. Who in their right mind parks on a beach with the tide coming in below a cliff?’

Meanwhile, a woman who had seen the recovery vehicle arrived shared a chuckle at seeing the driver’s misfortune.

She wrote: ‘Glad all safe but I did feel sorry for the poor recovery guy left to dig it out before being able to get it on his truck… whilst the owners watched.

‘Owner then tried to help getting it on the truck, only to manage to drop one of the front wheels off the side of it!