An NHS worker was nearly crushed by her own parked car when a thief rammed it through her living room.

Rhia Brindley, 24, was watching Love Island on Monday night when her car was smashed by a man in a stolen vehicle, who then fled the scene on foot.

The mangled vehicle ploughed through brick and her window and came to rest just a few feet away from where she was sitting with her dog.

She said: ‘Once I got over the initial shock I realised that the front of my car was in my living room.

‘I went outside and saw my neighbours had gathered around the front of my house. People told me that a man had run away from a car that he had used to crash into mine.

‘I was told by police when they arrived that if I was sat where I usually sit to watch TV I’d have been in hospital critically injured or dead.’

The hit-and-run driver is being hunted by Nottinghamshire Police, who said he was in a Toyota Corolla that was stolen from nearby Clifton on July 27.

Neighbours told Rhia, an office admin manager at the Queen’s Medical Centre campus, they had heard a car screeching up and down the street and driving dangerously earlier that day. 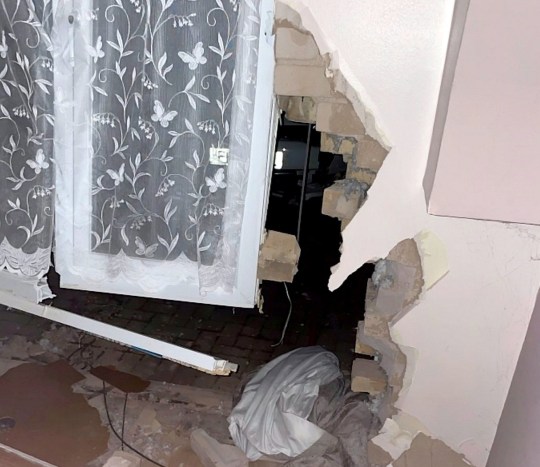 The front of Rhia’s home was destroyed (Picture: Nottinghamshire Police)

She added: ‘I just think whoever did this is careless. They’ve fled the scene not realising that they could have killed somebody.

‘It could have been more than just me, what if a child was playing in the street or an elderly person was walking down the road? The fact that they have just upped and left is awful.

‘It is traumatising that you can be sat in your living room then all of a sudden something like this can happen.’

Inspector Kate Savage encouraged anyone with information to get in touch. 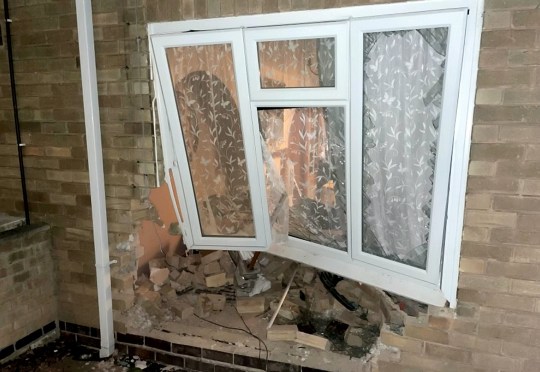 She said: ‘This dangerous and reckless act could have had far more serious consequences for Rhia.

‘The fact that she was left unharmed is a miracle and I can only imagine how shaken she is by what has happened.

‘We will be investigating this incident thoroughly with a view to putting the person responsible before the court at the earliest opportunity.

‘Dangerous driving costs lives and it is totally unacceptable and cowardly that someone would do this and then run away.’