CAPTAIN Sir Tom Moore’s funeral details are still to be revealed as the nation mourns its “great British hero”.

Captain Tom Moore has died at the age of 100 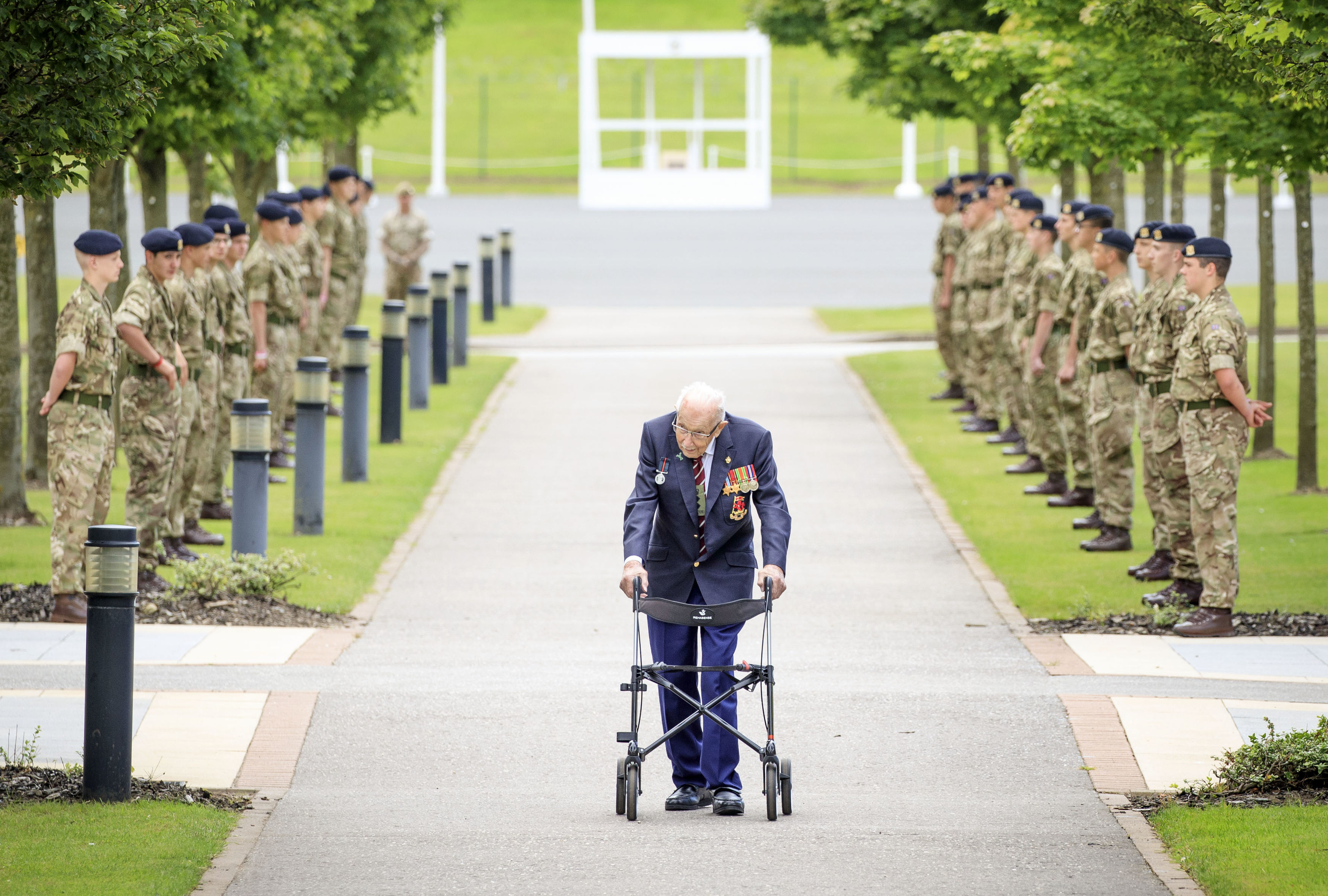 Captain Tom inspired the nation with his fundraising efforts 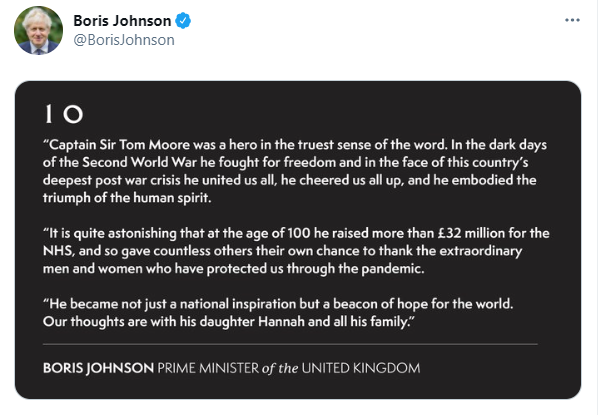 His family said yesterday that his funeral arrangements will be announced at a later date.

In a message to the public, they politely asked well wishers “do not send tributes at this time” because they are “simply unable to manage any gifts or flowers sent to the house or village”.

They instead ask that donations are made to their father’s legacy, The Captain Tom Foundation or any charity of choice.

The former soldier inspired the nation during the first Covid lockdown last year as his campaign to raise £1,000 for the NHS by completing 100 laps of his garden raked in more than £33million.

Captain Tom had suffered symptoms of pneumonia for several weeks, meaning he was unable to receive a Covid vaccine.

He was admitted to hospital on Sunday after testing positive for coronavirus.

The last year of our father’s life was nothing short of remarkable. He was rejuvenated and experienced things he’d only ever dreamed of.

His family were allowed to be by his bedside last night in his final hours and announced his death yesterday afternoon.

The PM spoke to Captain Tom’s daughter Hannah Ingram-Moore to offer his condolences and support, while the Union Flag was lowered to half mast above No10.

In a statement, Hannah and Tom’s eldest daughter Lucy Teixeira, said: “It is with great sadness that we announce the death of our dear father, Captain Sir Tom Moore.

A statement from the Royal Family said the Queen had sent her condolences to Captain Tom’s family.

And the PM said: “Captain Sir Tom Moore was a hero in the truest sense of the word. In the dark days of the Second World War he fought for freedom and in the face of this country’s deepest post war crisis he united us all, he cheered us all up, and he embodied the triumph of the human spirit. 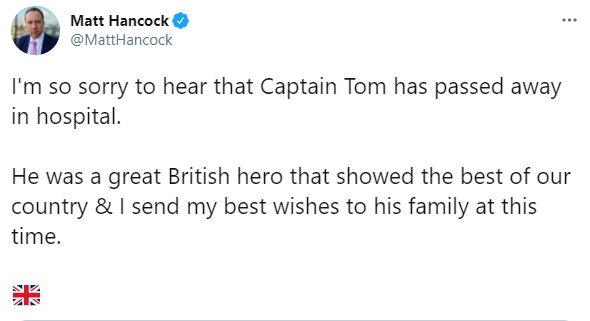 Health Secretary Matt Hancock said: “I’m so sorry to hear that Captain Tom has passed away in hospital.

“He was a great British hero that showed the best of our country & I send my best wishes to his family at this time.”

Chancellor Rishi Sunak wrote on Twitter: A proud Yorkshire man. A dedicated Army Officer. A tireless fundraiser. And above all, an inspiration to us all.

“Captain Tom Moore put others first at a time of national crisis and was a beacon of hope for millions.

“Britain has lost a hero.” 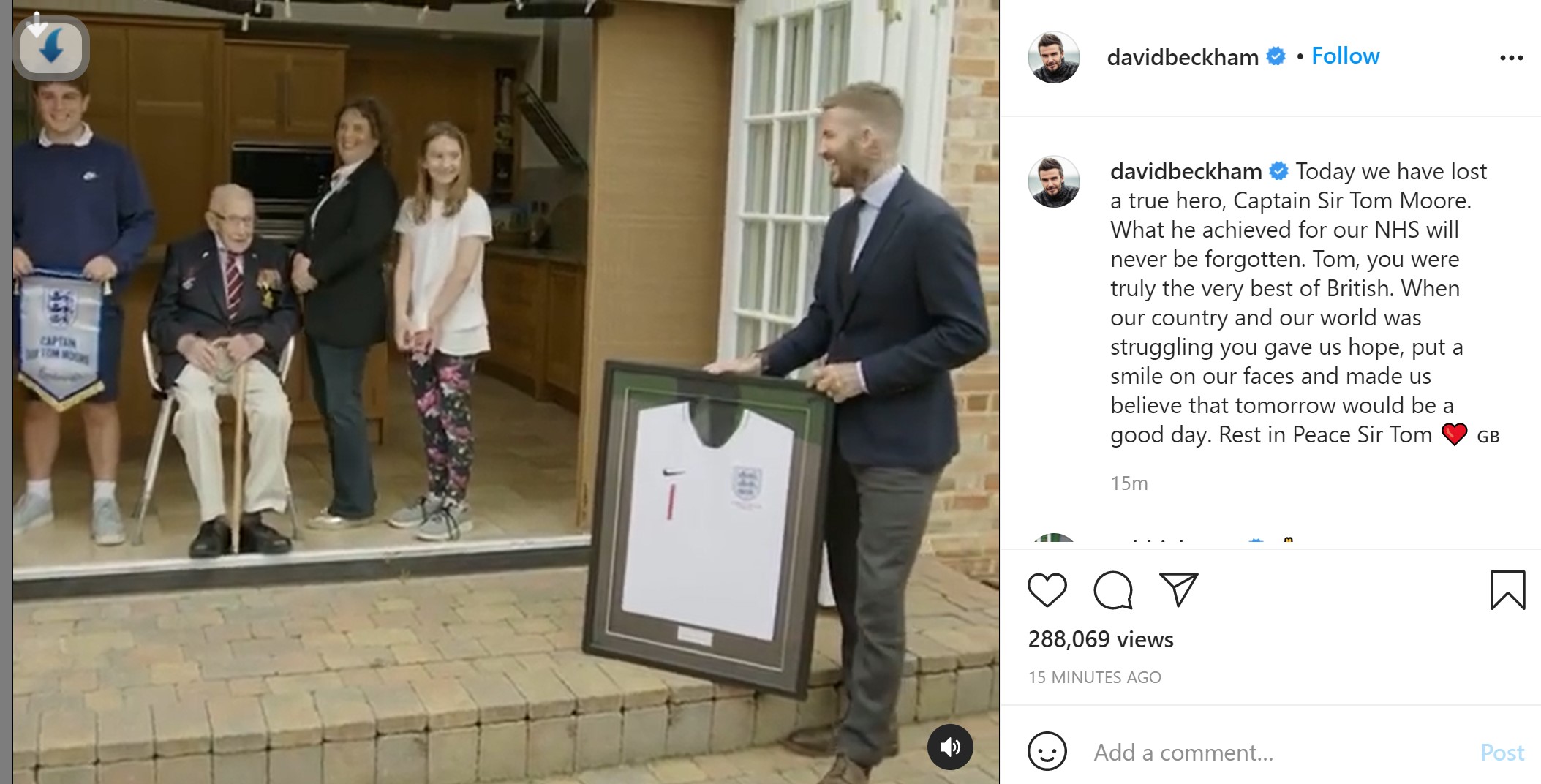 David Beckham was among those paying tribute to Captain Tom 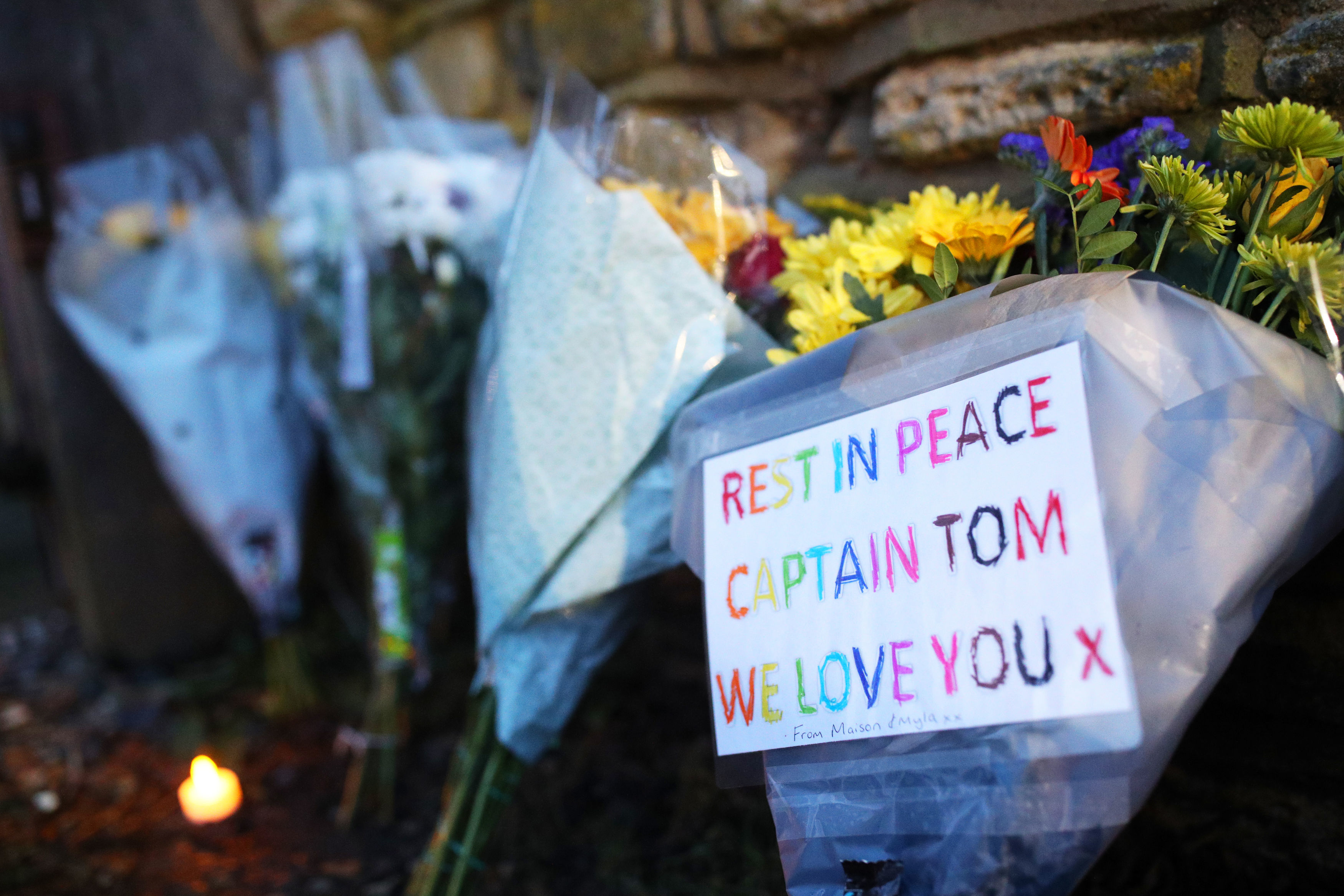 Wellwishers paid their respects to the NHS and WW2 hero

“What he achieved for our NHS will never be forgotten. Tom, you were truly the very best of British.

“When our country and our world was struggling you gave us hope, put a smile on our faces and made us believe that tomorrow would be a good day.”

Michael Ball, who reached Number 1 in the UK charts alongside Captain Tom with their version of You’ll Never Walk Alone said: “Rest in peace @captaintommoore A wonderful life so well lived and a hero and fighter to the very end. So very very sad.

“Love and prayers for @Hannah_I_M and all the family.”

Good Morning Britain’s Susanna Reid said: “The man who united and inspired our nation at a moment of deepest despair.

“Thank you Captain Sir Tom Moore for your service. I am heartbroken for your family. A life well lived, and well loved. RIP.”

Singer Katherine Jenkins, who met Captain Tom at his home in October to present him with a Pride of Britain Award, said: “Tomorrow will be a good day because of how brightly you shone in all our lives.

“Thank you for bringing us hope and strength. An angel amongst the angels. RIP Captain Sir Tom.”

Capt Sir Tom was knighted by the Queen last year 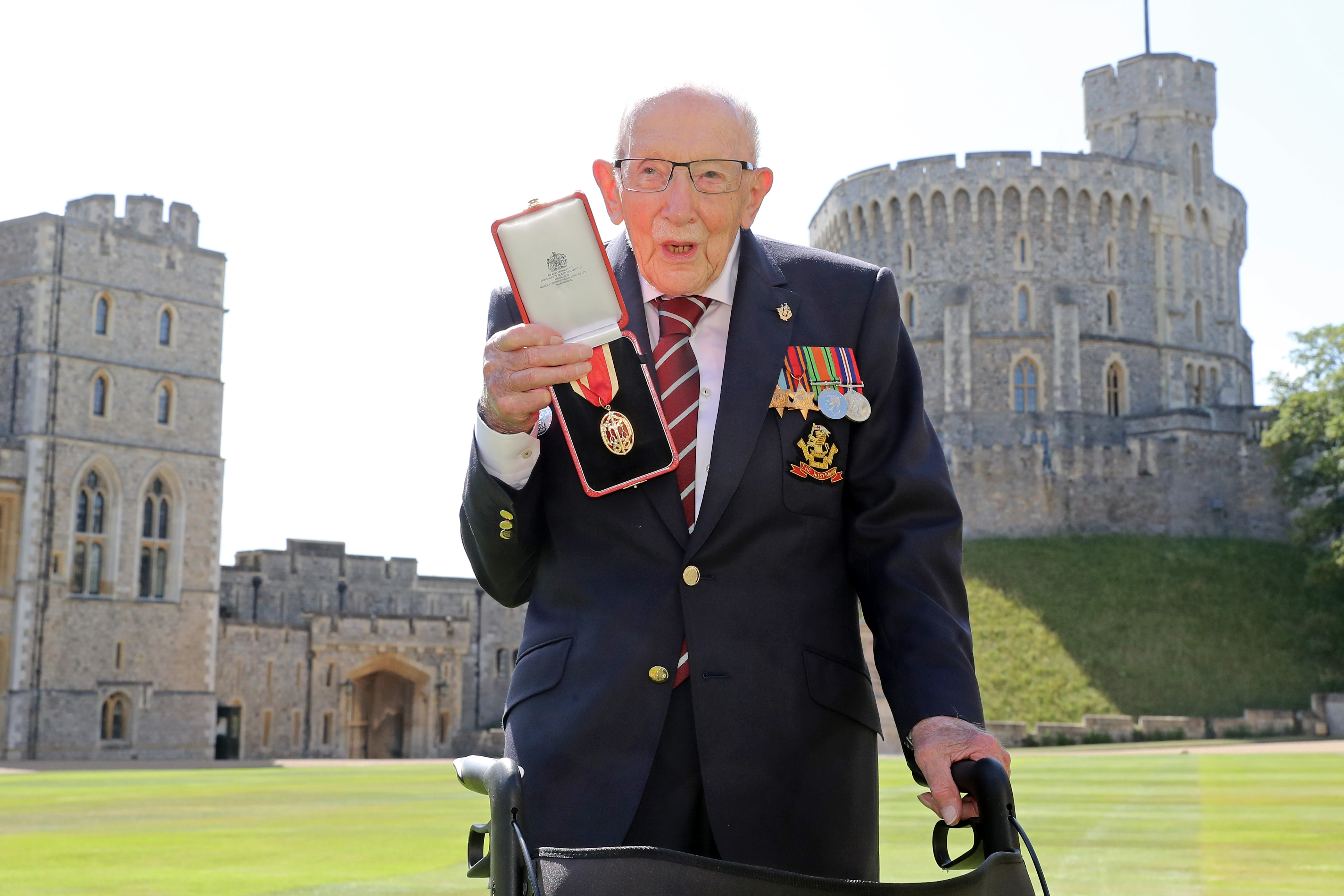 “The care our father received from the NHS and carers over the last few weeks and years of his life has been extraordinary.

“They have been unfalteringly professional, kind and compassionate and have given us many more years with him than we ever would have imagined.

“Over the past few days our father spoke a great deal about the last 12 months and how proud he felt at being able to leave behind the growing legacy of his Foundation.

“We politely ask for privacy at this time so we can grieve quietly as a family and remember the wonderful 100 years our father had.”

A statement by his charity, The Captain Tom Foundation, said: “We are heartbroken by the passing of our Founder and inspiration Captain Sir Tom Moore.

“As well as uniting the nation and giving hope when it was needed most he has been our beacon of light every single day.

“He was so passionate about The Foundation’s vision for a more hopeful world and equal society and was immensely proud of the growing legacy it was establishing in his name.

“We have been working with Captain Tom to create positive impact around causes close to his and the families hearts, from combating loneliness to championing education and equality and of course supporting the incredible NHS carers and frontline workers whom he held in such high regard.

“Captain Tom’s actions inspired people across the world and he was extremely honoured that The Foundation might inspire a new generation of Captain Toms.  We can all make a difference and through our continued work we will aspire to ensure Tom’s message of hope becomes an enduring legacy.

“Whilst we mourn his loss, we celebrate his life and will be forever grateful for his optimistic philosophy and wonderful spirit.

“Thank you Captain Sir Tom.  Because of you tomorrow will be a good day for so many more.”

Captain Tom travelled to Barbados for a final holiday with his family in December – before travel restrictions were announced by Prime Minister Boris Johnson – but fell ill after his return to the UK.

Information released on behalf of Captain Sir Tom Moore’s family revealed he tested positive for Covid-19 on January 22 after returning home from hospital where he was diagnosed with pneumonia.

The statement said Sir Tom was tested regularly for Covid-19 between December 9 and January 12 and each test returned negative.

The father-of-two was born in Keighley, West Yorkshire, in April 1920.

He returned to the UK to train tank crews at Bovington, Wiltshire and continued his hobby as a motocross rider.

Captain Tom had lived with daughter Hannah Ingram-Moore and her family in Bedfordshire since the death of his wife, Pamela, in 2006. 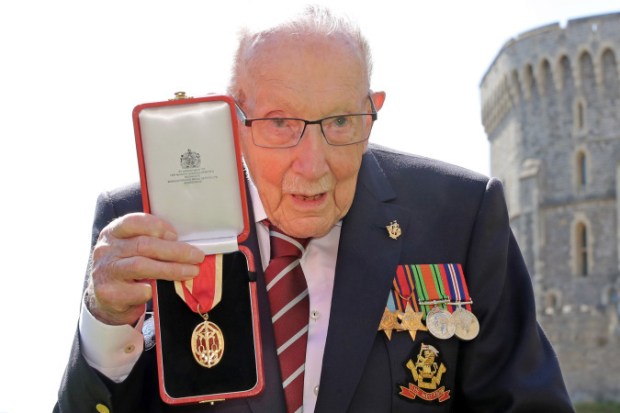 Daughter Hannah Ingram-Moore said on Sunday: “He was at home with us until today when he needed additional help with his breathing.

“The medical care he has received in the last few weeks has been remarkable.”

Captain Tom raised £33m by completing 100 laps of his garden 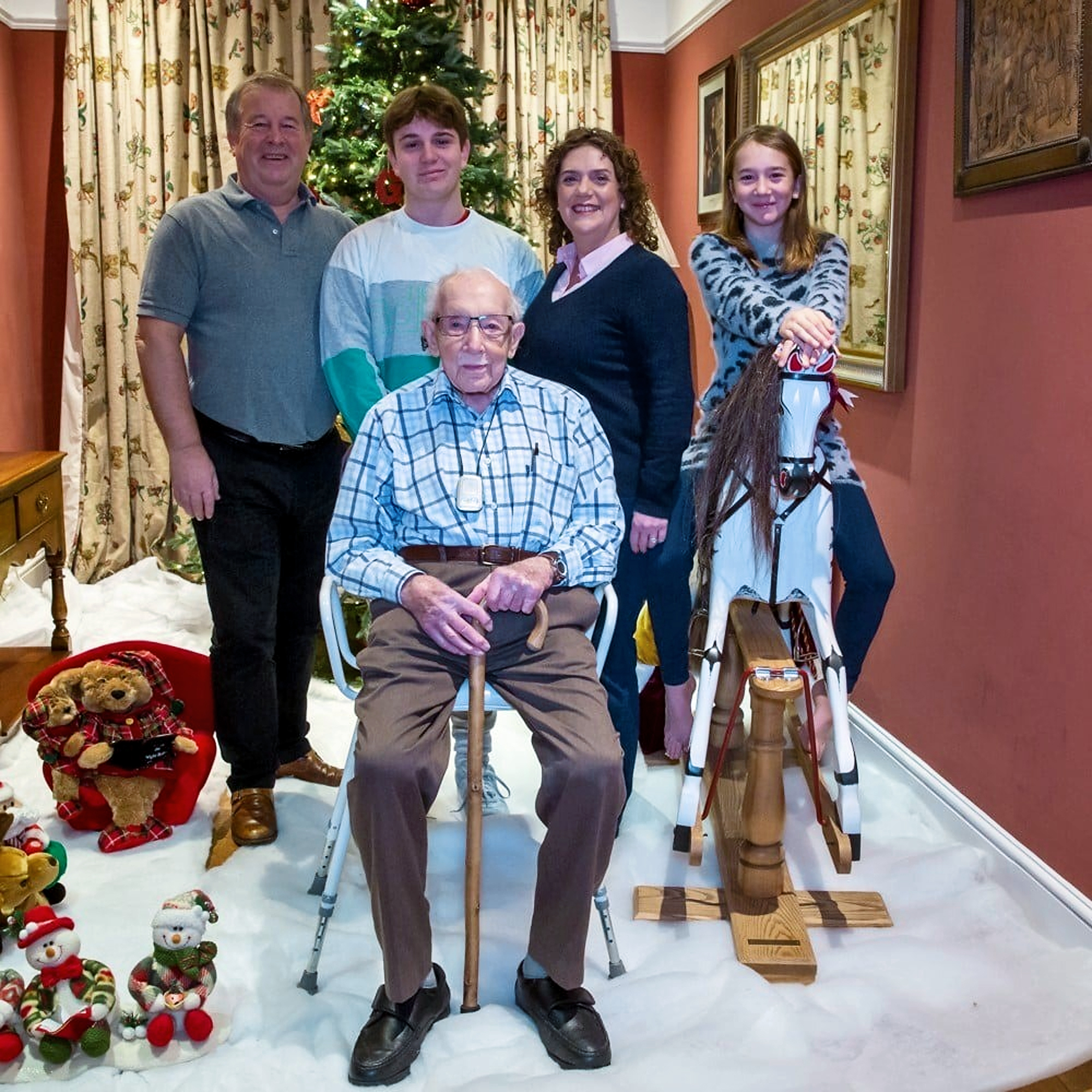 Captain Tom with his family in Christmas 2019 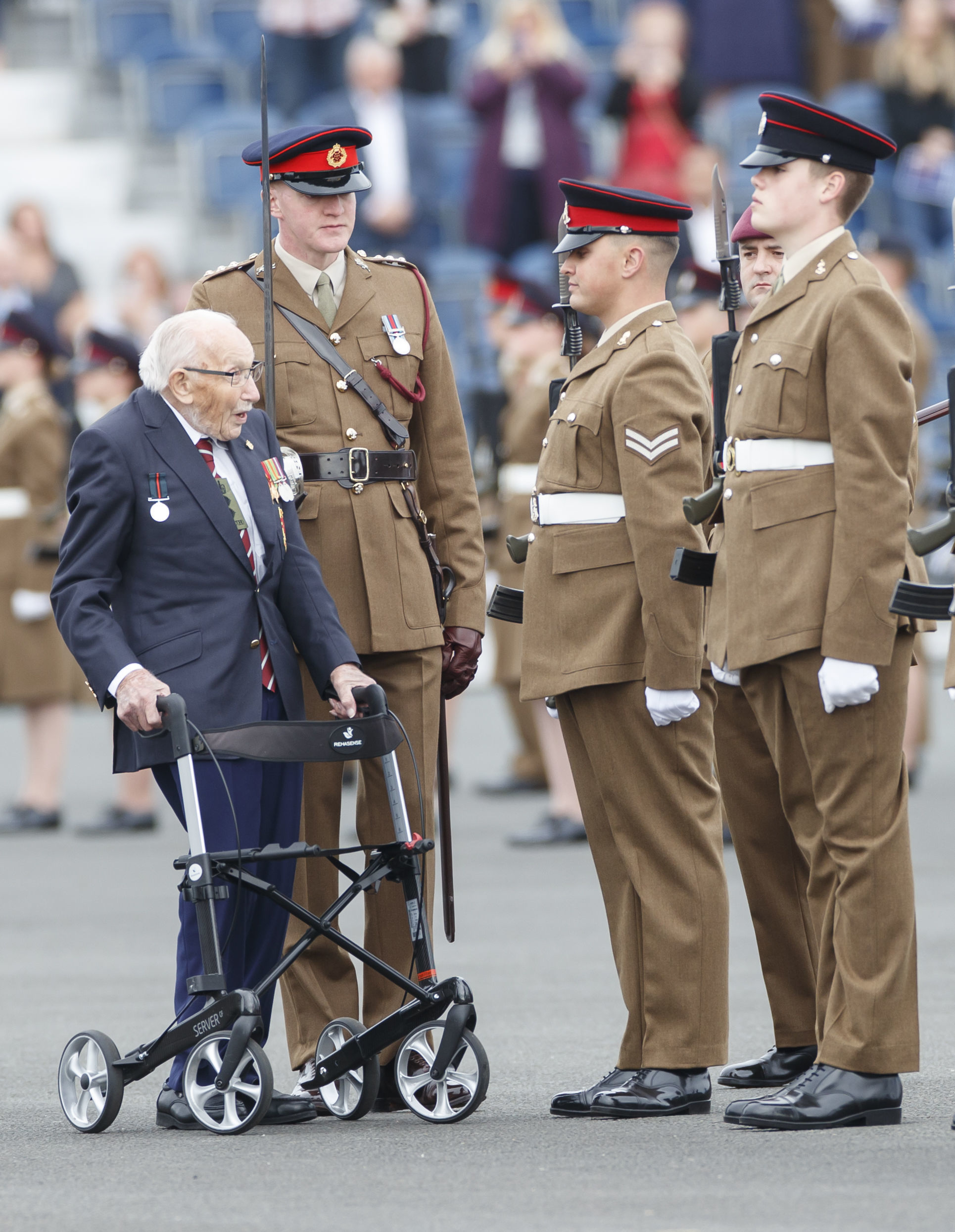