Canadian PM flees home as up to 50,000 truckers protest against vaccine rules

A ‘freedom convoy’ of anti-vaccine truckers which descended on the Canadian capital sparked fears for the Prime Minister’s safety.

Justin Trudeau left his residence and is said to have been moved to an undisclosed location, as a top parliament security official advised politicians to lock their doors over concerns that their private homes may be targeted.

The demonstrators, railing against Covid measures, parked on the grounds of the National War Memorial and danced on the Tomb of the Unknown Soldier, while some carried flags with swastikas.

Former US President Donald Trump has come out in support of around 50,000 demonstrators, following their week-long drive across Canada.

Truckers and other protesters descended on Ottawa with expletive-laden signs targeting Mr Trudeau.

The PM’s itinerary for the day usually says he is in Ottawa if he is at home, but on Saturday it said ‘National Capital Region’.

One of Mr Trudeau’s children has Covid-19 and he has been isolating and working remotely.

The convoy also prompted police to prepare for the possibility of violence and residents were warned to avoid downtown.

Canada’s Chief of the Defence Staff, General Wayne Eyre, said those involved in the demonstration ‘should hang their heads in shame’.

He tweeted: ‘I am sickened to see protesters dance on the Tomb of the Unknown Soldier and desecrate the National War Memorial.

‘Generations of Canadians have fought and died for our rights, including free speech, but not this. Those involved should hang their heads in shame.’ 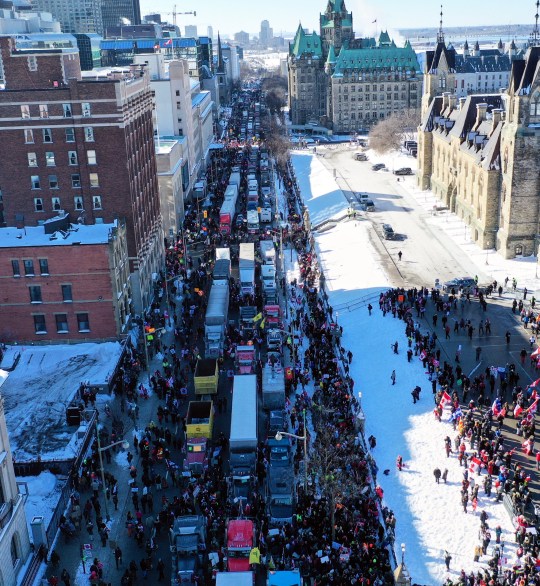 Up to 50,000 demonstrators are believed to have attended (Picture: EPA) 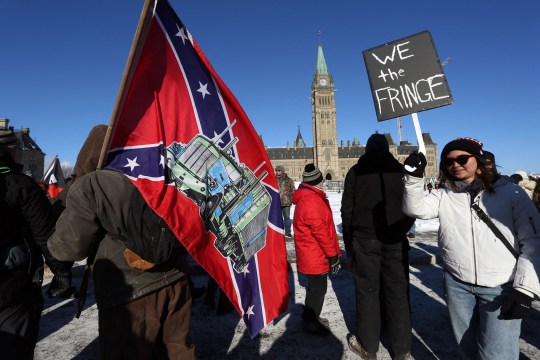 A supporter carries a US Confederate flag during the protest (Picture: AFP)

One truck carried a Confederate flag while the statue of Fox – who lost a leg to bone cancer as a youngster, then set off in 1980 on a fundraising trek across Canada – was draped with an upside down Canadian flag and a sign that said ‘mandate freedom’.

Mr Trudeau retweeted a statement from The Terry Fox Foundation that said ‘Terry believed in science and gave his life to help others’.

Protesters hit out at vaccine mandates, masks and lockdowns.

Eric Simmons, from Oshawa, Ontario, said that all vaccine mandates should be ended.

He said: ‘They’re not effective, they’re not working. It’s not changing anything. We can’t keep living like this.

‘People are losing their jobs because they don’t want to get the vaccine’. 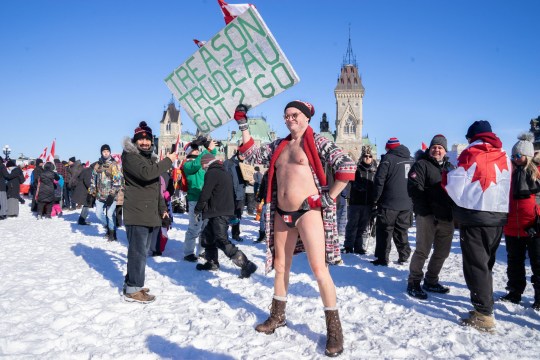 A demonstrator in an unlikely outfit accused Justin Trudeau of ‘treason’ (Picture: Reuters) 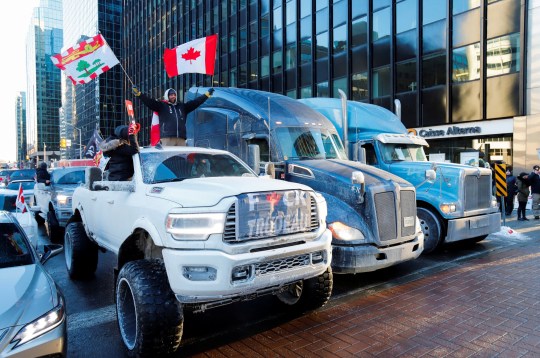 Trucks block a downtown road as truckers and supporters take part in a convoy to protest against Covid measures (Picture: Reuters)

Mr Trudeau has said Canadians are not represented by this ‘very troubling, small but very vocal minority of Canadians who are lashing out at science, at government, at society, at mandates and public health advice’.

Canada has one of the highest vaccination rates in the world and polls suggest the premier of Quebec, a state which is proposing to tax the unvaccinated, is popular.

Some are, in part, protesting a new rule that took effect on January 15 requiring truckers entering Canada to be fully immunised against the coronavirus.

The United States has imposed the same requirement on truckers entering the country.

The Canadian Trucking Alliance said a great number of the protesters have no connection to the trucking industry, adding they have a separate agenda to push. 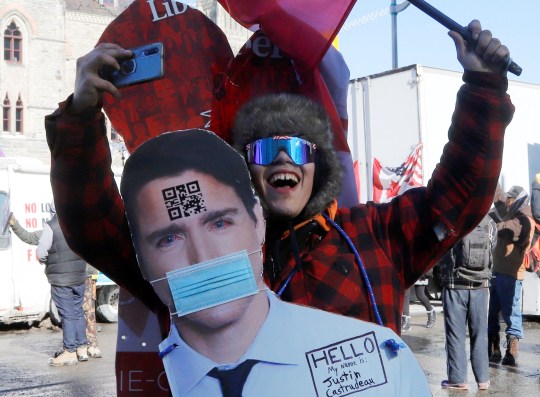 Mr Trudeau is not thought to have been at home (Picture: Reuters) 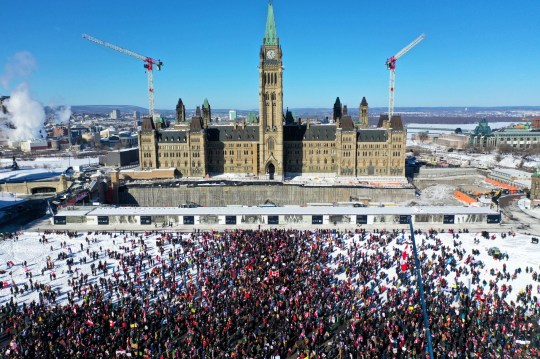 A crowd gathers in front of Parliament Hill (Picture: EPA)

The alliance noted that the vast majority of drivers are vaccinated.

Some opposition Canadian Conservative politicians served coffee to the protesters.


Mr Trump told a rally in Conroe, Texas: ‘We want those great Canadian truckers to know that we are with them all the way.

‘They are doing more to defend American freedom than our leaders by far.’

Former US Ambassador to Canada Bruce Heyman said the threat against democracy is not only happening in America.

‘Both the use of the swastika and the confederate flag are symbols of hate.

‘So very sad to see these symbols anywhere and especially in Canada,’ Mr Heyman, who was the US envoy under former President Barack Obama, added.