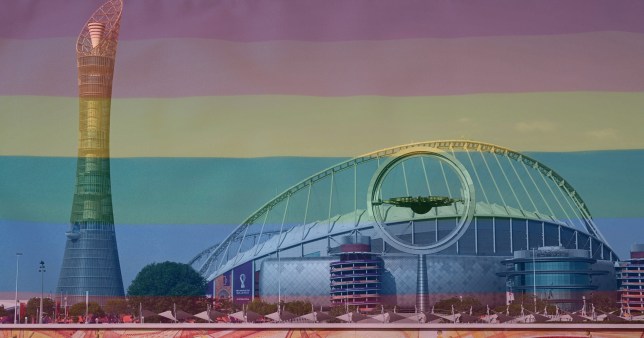 An estimated 1.2 million football fans are going to Qatar for the 2022 FIFA World Cup.

But will openly LGBTQ+ people, whose existence is illegal in the tiny Gulf nation, be among them?

Activists and travel experts doubt it.

What LGBTQ+ people should know about Qatar

The British government’s Foreign Office gets straight to the point.

‘Homosexuality is illegal in Qatar,’ its World Cup travel advice says, ‘private life in Qatar is largely respected but any intimacy between persons in public can be considered offensive, regardless of gender, sexual orientation or intent.’

In its general advice, the Foreign Office says people should be mindful that while the country is making some allowances for World Cup visitors, Qatar is a conservative country and they should be aware of its laws and customs.

So what laws and customs should LGBTQ+ people know about? According to the ILGA, an international LGBTQ+ rights group, there are a fair few.

For a start, same-sex sexual activity is illegal under the penal code, with article 285 slapping a jail sentence of up to seven years for ‘sodomy’ and ‘sexual intercourse’.

While Qatar has denied it has ever happened, under Sharia law, it is technically possible for gay, bisexual and pansexual Muslim men to be sentenced to death. 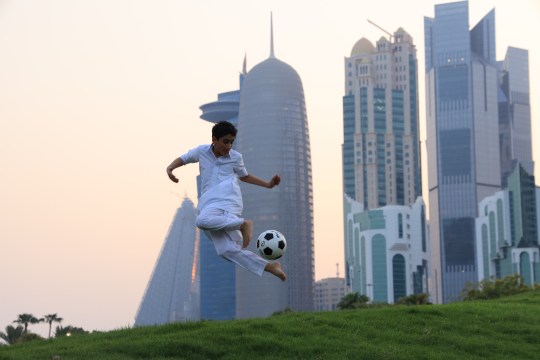 ILGA Asia says it’s unlikely that the death penalty will be handed to World Cup fans visiting, but safety isn’t a guarantee.

There are next to no gender recognition laws in Qatar either. Trans Qataris can’t change their legal gender or gender markers on their identity documents.

There have also been numerous cases of LGBTQ+ Qataris being arbitrarily arrested, Human Rights Watch says.

Qatari border officials can legally bar LGBTQ+ from entering the nation as well as deport them, ILGA adds. There are no hate crime protections either and LGBTQ+ protests are prohibited.

What has Qatar or FIFA said about LGBTQ+ people going?

Though he insisted LGBTQ+ people ‘would be welcome at the World Cup hosted in Qatar’.

FIFA has played a similar tune. The international governing body says it’s ‘confident that all necessary measures will be in place for LGBTIQ+ fans and allies to enjoy the tournament in a welcoming and safe environment, just as for everyone else’. 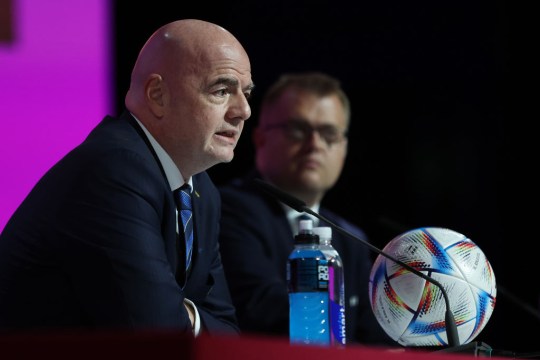 In a meandering speech, he compared having red hair as a kid to the plight LGBTQ+ Qataris face as he urged people to criticise him rather than Qatar.

‘I know what it feels [like] to be discriminated… I was bullied because I had red hair,’ he said. ‘Plus I was Italian.’

It remains unclear at the time of writing whether, on a technicality or otherwise, a person can be imprisoned for having red hair in Qatar.

Advice for LGBTQ+ tourists, according to experts

For LGBTQ+ people who are attending nevertheless, is there anything they should do to stay safe?

‘As we approach the 2022 Men’s World Cup, we must remember that Qatar is a country where LGBTQ+ people are persecuted simply for being themselves,’ she tells Metro.co.uk.

‘We encourage fans to follow the official FCDO travel advice, but sadly, this year’s tournament is not safe for everyone.’

Duncan Greenfield-Turk, the founder of Global Travel Moments, says as a gay man, he doesn’t feel safe enough to visit Qatar. His travel agency doesn’t advise people to go either.

‘Travelling to Qatar would be considered taking a life-threatening risk,’ he warns. 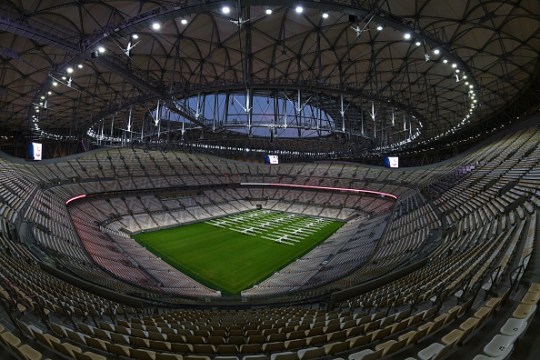 ‘Can you travel there? Of course. However, as an individual, you would have to take measures to ensure you hide who are you, effectively closeting yourself and this is only possible if you present as cis male or female.’

Trans and non-binary people would have to be especially cautious, he says, such as whether their travel documents’ gender marker reflects who they are.

For those thinking of flying out, Greenfield-Turk says: ‘First, work with a travel advisor that specialises in LGBTQ+ travel to understand if there are laws, rules, etc that are a risk to your life.

‘If travelling for work, flag this with your employer as they have a moral and legal obligation to protect you and sending you to a country that is not safe is a breach of this.’

Not every Qatar necessarily agrees with criminalising LGBTQ+ people, but raised eyebrows from locals is something to keep in mind, Greenfield-Turk adds. 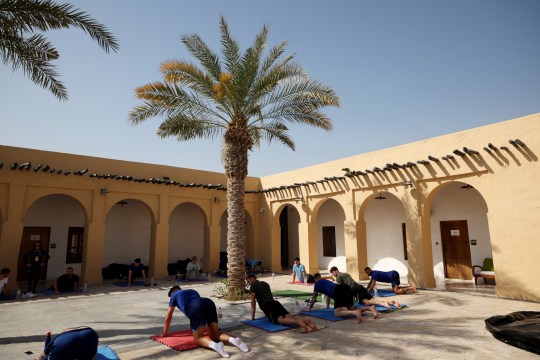 The England team at a hotel in Doha, Qatar (Picture: Getty Images/Eddie Keogh)

Finding accommodation will also be tricky for LGBTQ+ people.

For a start, there aren’t many beds for everyone to begin with. Only about 130,000 rooms for up to 1.2 million visitors are expected over the tournament.

Some apartments are being built, and the Qatar 2022 website has an accommodations portal to book lodgings. But it’s better to go through a travel adviser who can keep LGBTQ+ people’s safety in mind.

‘Choose your hotel with care and make sure you let as many of your family and friends as possible know where you are staying and in which room,’ Greenfield-Turk says. ‘Where possible, travel in a group and don’t travel alone.’

Ian Johnson is the chief executive officer for Out Now, an LGBTQ+ marketing agency that has worked extensively with the tourism sector.

Johnson says Out Now hasn’t trained any hotels in Qatar but has helped tourism officials support LGBTQ+ people in countries that criminalise them. 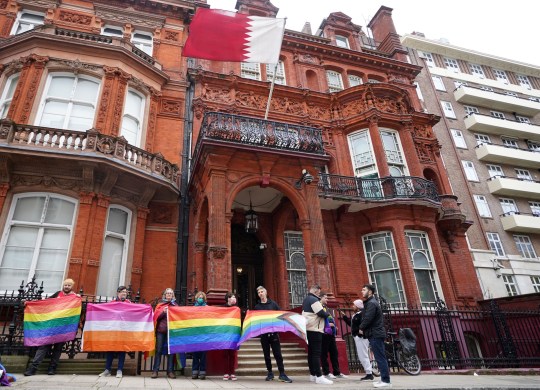 For Qatari hotels that want to host LGBTQ+ guests, Johnson recommends staff are trained on how to best support them and try to flag (maybe literally, with a Pride flag) that they are LGBTQ-inclusive.

Johnson admits that this might not be that realistic. ‘We worry that this may be very difficult or may simply be impossible in all the circumstances for many accommodation providers,’ he says.

A lot of experts struggled to give advice, often saying it feels it goes against the values of pride and openness the LGTBQ+ community embraces.

Johnson himself was among them. ‘Some ardent LGBTQ+ fans will no doubt prioritise football and choose to attend the World Cup in Qatar,’ he says.

‘However, these will be a minority of the much larger number of LGBTQ+ fans who would normally be expected to attend if the event was being held in a more supportive country.

‘When you know you could be imprisoned, or for some LGBTQ+ people risk being put to death, it becomes very difficult to feel welcome or safe in such a place. The only completely safe option seems to be not attending.’

After all, Johnson says, safety is something that LGBTQ+ people have to keep in mind when booking holidays or travelling for work.

More than eight in 10 LGBTQ+ people consider whether their existence is, well, illegal when it comes to deciding where to travel to, according to an Out Now survey. 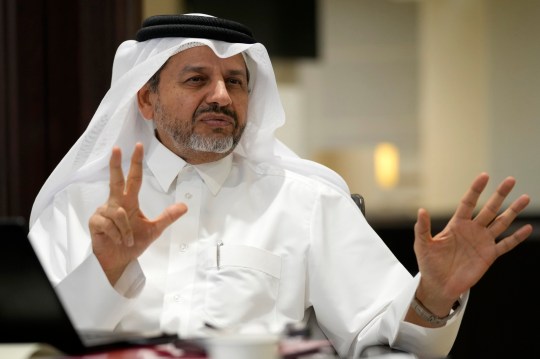 Jack Duncan, the co-founder of tour operator Blank Canvas Travel, knows how LGBTQ+ people could go to Qatar. But he would never recommend they do.

‘The only thing I can advise is don’t go,’ he says, ‘because otherwise, I’d be suggesting things that I feel repulsed to suggest.

‘Separate beds, no overt displays of affection and all this, because I hate recommending that queer people hide who we are.

Ex-Arsenal boss Arsene Wenger tips England to reach ‘at least semi-final’ of World Cup.. if they forget about shaky 2022

We feared for our lives as masked robbers made off with Rolexes in crowbar raid, RHOC stars Nicole and Joe Sealey reveal