California had its driest ever start to a year in 2022 (Picture: EPA)

As drought-stricken California prepares to restrict water usage for tens of millions of residents, a new water recycling plant could come to the rescue.

The Los Angeles plant already cleans waste water, making it safe to go back into the ocean.

At the cost of $4 billion dollars, it could also clean up to 150 million gallons a day to the standard of tap water, supplying the homes of around 500,000 people.

Governor Gavin Newsom, who toured a prototype of the water recycling plant on Tuesday, said purifying waste water destined for the Pacific Ocean was ‘revolutionary’.

‘There’ll have never been a project like this in US history,’ he said.

He added it would be ‘profoundly important’ for the future of his state.

The plant still requires regulatory approval but, if granted, it could be up and running by the end of the decade.

California has spent years in and out of drought but saw its driest ever start to a year in 2022 with precipitation in January, February and March almost ten inches below the previous record low.

Governor Newsom said the state had never experienced so many consecutively dry years in a row.

Much of California’s water comes from the Colorado River or from snowmelt on the mountains running downstream. 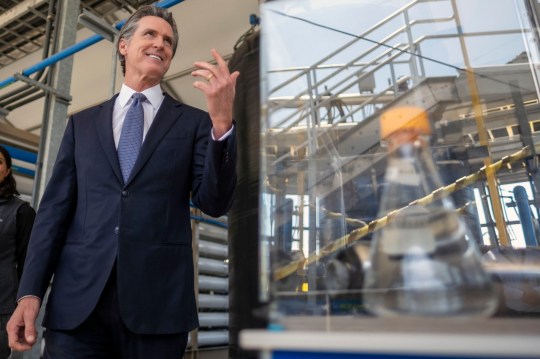 Governor Newsom said there has ‘never been a project like this in US history’ (Picture: AP)

Lake Mead – which stores the water and also supplies Nevada, Arizona and New Mexico – is at a historic low right now with levels dropping more than 100 feet over the last 20 years.

It comes as California brings in hefty water restrictions, with LA residents told to significantly cut down on their usage from June 1.

The state is planning to introduce set watering days based on location, plus strict limits on the amount of times sprinklers can run.

Watering plants on any day between 9am and 4pm will also be completely banned and officials also want pools to be covered to minimise evaporation.