Rebekka Jane, who runs Bankhouse Diner & Bar in Stafford, hit back after getting a one star review (Picture: BPM MEDIA)

Since opening her 1950s-style American diner last year, Rebekka Jane has had a fair share of misfortunes.

As she tries to bounce back from the Covid pandemic, criminals have targeted her restaurant on three occasions since being allowed to reopen outside.

She’s had parasols stolen, two sets of customers doing a runner and a Google review complaining about the environmentally friendly boxes their food was served in.

So the last thing she needed, was another one star review from a man upset about the lack of baked beans with his meal, even though they weren’t on the menu.

The unhappy customer even said he and his girlfriend had to stop off at McDonald’s on the way home because of the portion sizes at Bankhouse Diner & Bar in Stafford.

He complained that the size of the meal was ‘terrible for the price’ and said his eight-year-old daughter could eat more than he was given. 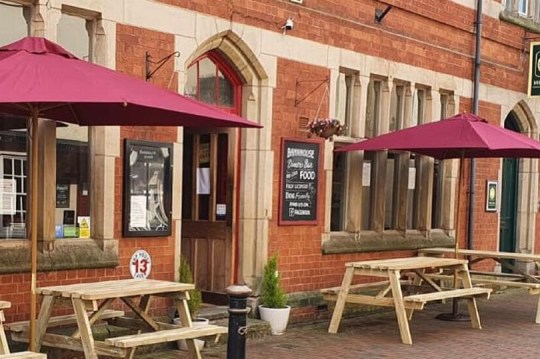 Rebekka went on a self-confessed ‘rant after facing a series of misfortunes (Picture: BPM MEDIA)

Responding on Google, Rebekka said: ‘I really do wish people would mention these issues there and then rather than using this platform to publicly try and harm our business.

‘Please just know that all our food is cooked from fresh, all sourced locally and we believe are costed out accordingly.

‘Our food costs and overheads are not cheap. The mark up is as standard. We pride ourselves on a friendly atmosphere and fresh food. McDonald’s certainly isn’t either of those.’

In an update, she added: ‘I now know this customer has a breakfast sandwich – cost £6. Apparently he was annoyed that it wasn’t served with baked beans… it’s not even served with beans!

‘Again I go back to the fact that we need customers to communicate with us and for folk to stop the negative, unhelpful and frankly totally unfair comments they feel the need to post on Google.’

Venting on a Staffordshire community Facebook group, a furious Rebekka said: ‘This past fortnight we’ve had two sets of people purposely not pay for their meals and drinks and one set tried to scam our card reader and not pay. We have you both on CCTV and the card scamming couple have been reported to the police.

‘We’ve also had two unhelpful reviews on Google. One guy was upset he didn’t get beans (they weren’t even on the menu ) and apparently they had to go to McDonald’s as they were still hungry.

‘The other was a review by a woman stating that she didn’t like her food being served in a box (it’s a nice biodegradable box). For the love of God!

‘We are trying to adhere to Covid regulations. They both left one star reviews based on those facts. Speak to us! Small issues like these can always be rectified.

‘And last night some little chav stole our parasols. If you saw a young white male on May 3 around midnight carrying parasols through town – they are ours!

‘None of the people that did these things will care but please just know that people like YOU damage small businesses like OURS. We’ve been through 12 months of not being able to trade properly and not earn.

‘We have spent a considerable amount of time and money, plus planning, refurbishing and working damn hard to make our diner and bar a welcoming and great place to be. Please think about what you do for your own gain.

‘We have CCTV throughout our property and no one will get away with theft.

‘Hospitality is hard work and small businesses try so hard – your thieving and disrespect is not required.’