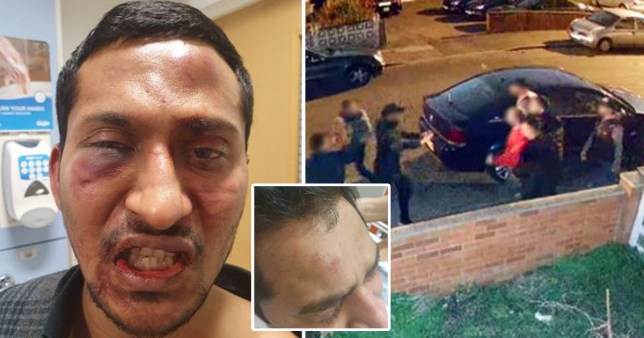 The brothers said they feared for their lives as the revellers rained down blows (Picture: BPM Media)

Footage has emerged of two brothers being savagely beaten after allegedly asking neighbours to keep the noise down at an illegal lockdown party.

Abdul Hafiz, 44, and Abdulla Al Mamun, 38, were repeatedly punched and kicked, and claim the eldest was ‘battered with a broken fence panel and knocked unconscious’.

Mr Hafiz said he heard ‘shouting, loud music and destruction’ coming from the property in the Palfrey area of Walsall, West Midlands, and asked guests there to ‘quieten down’.

He says the situation ‘became hostile’, after which his younger brother ran to his aid, but a large group of males exited the property and surrounded them.

CCTV shows them striking the brothers while another neighbour appears to try and defuse the situation.

The brothers were pushed down the road and out of shot, which is when they claim the attackers grabbed the fence panel and knocked Mr Hafiz out cold for 15 minutes.

The attackers allegedly fled the scene while neighbours called emergency services, who took the brothers to hospital.

Mr Hafiz also suffered a fractured hip, while his younger brother was treated for face injuries.

A spokesperson for West Midlands Police said: ‘We’re investigating after two men were injured following disorder in Lord Street, Palfrey, at around 10.45pm on Monday.

‘It’s understood the men were struck with weapons following a dispute,
but fortunately their injuries were not serious.

‘Attackers are believed to have come from a property on the street, then fled, and we’re carrying out enquiries at the address and assessing CCTV in our attempts to identify those involved.

‘We’re speaking to the injured men, one aged in his 30s and the other in his 40s, to obtain further information.’