The designer of the familiar British Rail logo has warned against government plans to revamp the symbol and dismissed an attempt to give it a green makeover as a “load of old bollocks”.

The transport secretary, Grant Shapps, has said his plans for the new Great British Railways will involve “updated versions of the classic ‘double-arrow’ logo” when the system is launched next year. He has promised “a single familiar brand with a bold new vision for passengers – of punctual services, simpler tickets and a modern and green railway that meets the needs of the nation”.

The Rail Delivery Group (RDG) launched a campaign on Wednesday to underline the environmental benefits of train travel, featuring the traditional logo but coloured in four shades of green.

The group, which represents the industry, had wanted octogenarian designer of the original logo, Gerry Barney, to endorse the makeover. But when the Guardian showed him the recoloured version he was appalled.

“I think that’s rubbish,” he said. “I could understand it if they had just swapped red for green. But why on earth have they got that many colours? It’s a load of old bollocks. It’s just a mess.”

Barney, 82, was surprised by the change because RDG has been running a TV advert since August that uses the red version logo very prominently. “It’s nice that they are using again and using it properly, so why would they want to change it?” he said.

The RDG had prepared a supportive quote for Barney, endorsing the green makeover. He refused. “No way”, he said when it was read to him at his home in Epsom.

Barney, who designed the double arrow logo as a 24-year-old lettering artist, is also wary of Shapps’s plan for an updated logo based on the original version. 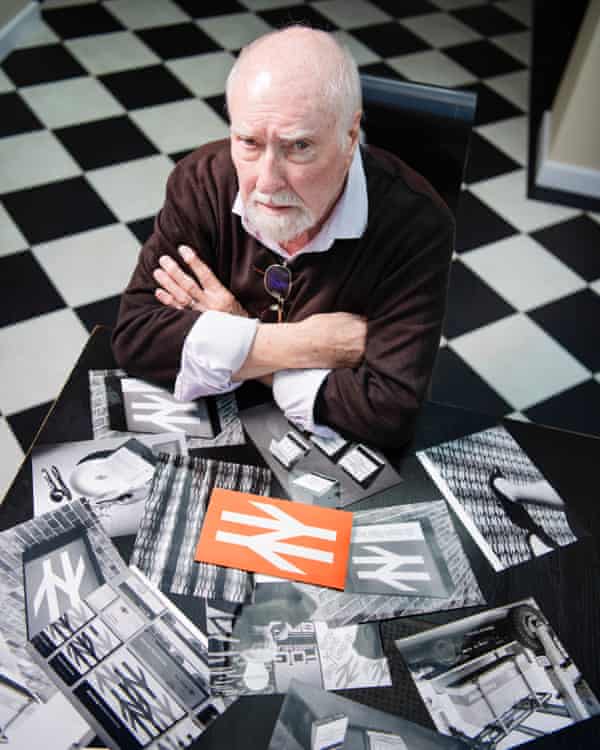 Barney came up with the idea for the logo on his commute into work at the Design Research Unit in 1964 from Ealing Broadway to Bond Street.

“The only thought I had was railway lines coming and going,” he recalled. “I did a sketch on the tube on the back of an envelope. It really was an envelope, and I wish I could find it now, it’d probably be worth a fortune. When I got into work I drew it up.”

The design was selected by the board of British Railways, chaired at the time by Dr Richard Beeching. He was best known for closing thousands of miles of branch lines from the network, known as the “Beeching axe”, and had demanded a logo “powerful enough to symbolise the service it stands for”.

Despite successfully meeting the brief, Barney never met Beeching. “I wasn’t allowed to, I was too junior,” he said. “I didn’t even get a ‘thank you’.”

The design was unveiled in January in1965 at an exhibition featuring the logo on everything from wine glasses and carpets to tickets and matchboxes.

The initial reception to the double arrow was mixed. “People said they don’t know if they’re coming or going,” Barney said. At the time, the Guardian said the arrows on uniforms made female staff look like “prim old-fashioned convicts”.

But the logo stuck and soon became a visual shorthand for trains and stations. Barney said: “When they started putting it on road signs I began to realise it was going to last. I’m surprised it’s lasted so long, but they’ll find it difficult to replace it now because it’s on every road sign to a station.”

The logo even survived privatisation in 1996, prompting Labour to accuse the Conservative transport minister of “using the British Rail logo as a fig leaf to cover his embarrassment at destroying the rail network.”

Now Barney is worried his logo could be used to conceal the failings of a rebranded privatised system. “I think the railways should be fully renationalised. Having disparate companies and regions is a load of nonsense. Because each line has its own identity, you’re totally confused. The only reassuring thing is the logo to show you’re at the station.”

He always wanted the logo to be used more boldly. “The first time I sketched it out I covered a whole train with it, from roof to rails, so you could see it a mile away. It looked bloody great, but they wouldn’t do it. They were too apologetic about it, treating it like a badge rather something they were proud of.”

Barney suggests his original bold conception could provide a way of updating the logo now.

“Application is probably the secret to updating it. There’s no point in changing it. They should do what I initially said and do it big.”

But he is not expecting to be approached by rail officials for his views on the revamped logo. “They probably don’t know I’m still alive,” he said.

Barney and his wife celebrated his 82nd birthday last Friday with a trip to Cornwall, by rail.