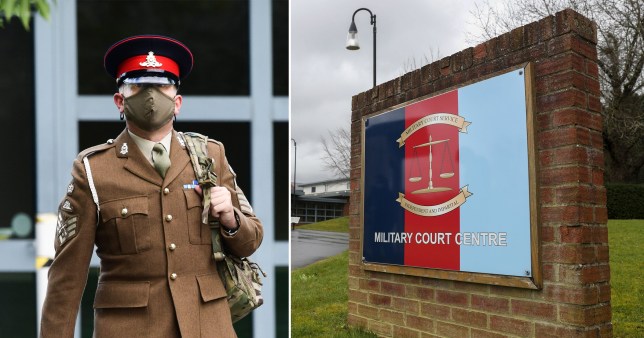 Adam Porter, 42, has been dismissed from the Army after the assault (Picture: Solent/PA)

A sergeant has been dismissed from the British Army after he put his hand up a female soldier’s dress before squeezing her bottom on a night out.

Adam Porter, 42, had knocked back a bottle of wine, several tequila shots and had cracked open a bottle of port at a pub as soldiers from the regiment enjoyed their first post-Covid work celebration.

Intoxicated, the dad-of-four spotted the woman – who cannot be named for legal reasons – in a knee length floaty dress and told her, ‘You are going to get me into trouble.’

Bulford Military Court, in Wiltshire, heard he then said, ‘it feels nice doesn’t it’ as his hand ‘disappeared’ up her leg, pinching her left buttock.

Porter then told the ‘shocked’ woman, who was more junior than him: ‘I shouldn’t have done that should I.’

The victim had work the next day so ‘didn’t want to get too drunk’ that evening.

‘It was at the bar when we were having shots. I spoke to Porter before which was a normal conversation,’ she said. 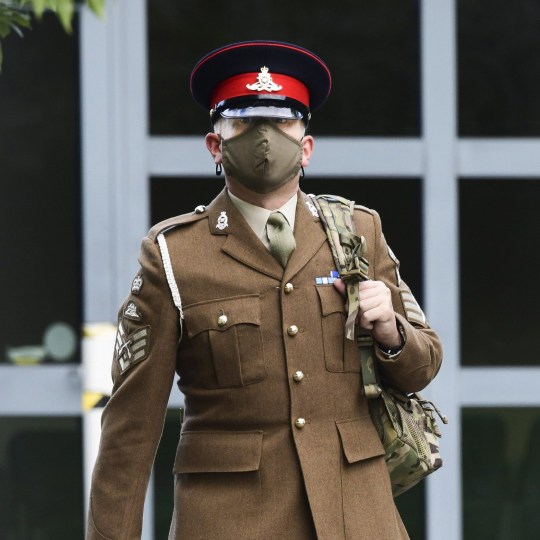 ‘Then he was pointing at a few of the females there and saying “I am going to finger them”.

‘He was drunk. He was slurring his words, staggering, and not acting in character.

‘As everybody went away it was just me and Porter at the bar stood shoulder to shoulder.

‘I was facing the bar and he put his hand up my dress. Then I felt him squeeze my bum and then he took his hand away. I recall him smirking while he did it.’

She said Porter squeezed her left buttock for ‘two or three seconds’ with his right hand.

‘It was a skin-on-skin contact,’ she stressed. ‘He pulled his hand away and said, “it feels nice that doesn’t it”.

‘Two seconds later he quickly went into saying “I shouldn’t have done that should I” – because he knew it was wrong. I was a bit shocked and didn’t know what to do.’

A formal complaint was not raised until three months later when one of her friends told a senior officer.

When asked why she had not complained sooner the soldier said she ‘didn’t trust’ her chain of command at the time, saying they were mostly male, friends and ‘cliquey’.

Porter told the court he ‘didn’t remember’ any contact between the two of them that evening and insisted it had not happened.

A board found him guilty of sexual assault after deliberating for two hours and 45 minutes.

Sentencing him, Judge Advocate General Darren Reed said: ‘Service personnel have little choice around where, and with whom they serve.

‘Sexual offending undermines the bonds of trust between those who serve together. You put your hands up the dress of a subordinate.

‘In that stupid drunken moment you undermined the standards expected of you..’

Porter will complete 35 sex offenders’ rehabilitation sessions as well as 80 hours of unpaid work within the next 12 months.

He was also handed a three-year community service order for the sexual assault.

Who Is Clare Crawley’s Boyfriend Ryan Dawkins? What to Know