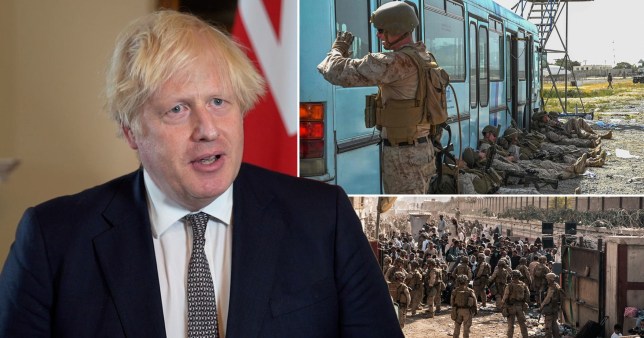 Boris Johnson has suggested the G7 might unfreeze funds for Afghanistan if the Taliban agrees to certain conditions (Pictures: AP/Getty Images)

G7 powers have agreed on several conditions in their ‘roadmap’ for how the major western powers will deal with the Taliban, Boris Johnson has said.

The leaders of Canada, France, Germany, Italy, Japan, the UK and the US had an emergency virtual summit on Tuesday, discussing how they should interact with Afghanistan’s new government.

When the Taliban took over the country earlier this month, the International Monetary Fund froze access to £330million in emergency reserves.

But now Boris Johnson has said that money could be unfrozen if the Taliban agrees to several conditions.

The G7’s official joint statement echoed similar convictions, saying: ‘We call for adherence to obligations under international human rights law, including the rights of women, girls, and minority groups, and that international humanitarian law is upheld in all circumstances.

‘We will judge the Afghan parties by their actions, not words.

‘In particular, we reaffirm that the Taliban will be held accountable for their actions on preventing terrorism, on human rights in particular those of women, girls and minorities, and on pursuing an inclusive political settlement in Afghanistan.

‘The legitimacy of any future government depends on the approach it now takes to uphold its international obligations and commitments to ensure a stable Afghanistan.’

It comes after the G7 powers said their ‘number one’ priority is getting the Taliban to allow people to leave Afghanistan safely.

But the religious, military organisation has already made August 31 the deadline for US evacuations.

President Joe Biden agreed to pull all US troops out of Afghanistan by the Taliban’s deadline but western powers want to make it a condition that people leaving the country will have ‘safe passage’.

Boris Johnson told a press conference the G7 powers intend to use their ‘considerable leverage’ to achieve this. 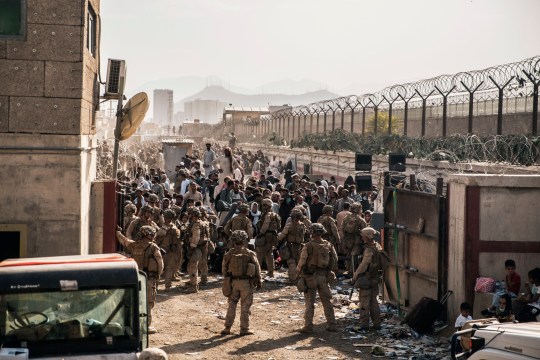 Boris Johnson said many of the scenes at the airport in Kabul were ‘harrowing’ (Picture: AP) 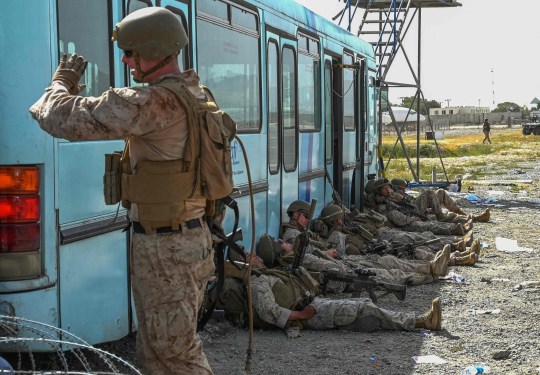 The US has agreed to withdraw all of its military troops by August 31 (Picture: Getty Images)

‘And we’ll go on right up until the last moment that we can. We’re confident we can get thousands more out but the situation at the airport is not getting any better.

‘There are public order issues, there are harrowing scenes for those who are trying to get out. And it’s tough for our military as well.

‘So what we’ve done today, the G7, we’ve got together the leading western powers, and agreed on not just a joined approach to dealing with the evacuation, but also a roadmap for the way in which we’re going to engage with the Taliban – as it probably will be a Taliban government in Kabul.

‘The number one condition is setting as G7 is that they’ve got to guarantee right the way through, through August the 31 and beyond, safe passage for those who want to come out.’

Mr Johnson went on to reaffirm the UK’s commitment to Afghanistan and promised to use the country’s power to affect the humanitarian crisis in the country.

The Taliban’s Zabihullah Mujahid has said he is ‘not in favour’ of Afghans trying to leave the country and has told citizens to stop going to airports.

He said foreigners could leave but promised the Taliban would ‘take a different stance’ after August 31.