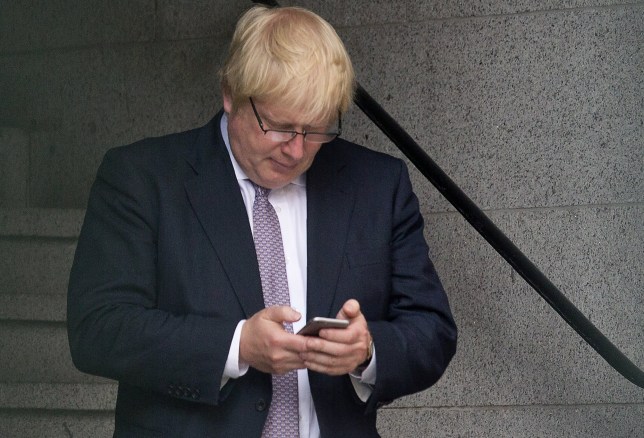 Anyone who searched for the number online could have tried to have a chat with the prime minister (Picture: AFP via Getty Images)

Prime Minister Boris Johnson’s personal phone number has been freely available on the internet for the past 15 years, reports claim.

The Tory leader’s digits were printed at the bottom of a press release when he was a shadow minister and opposition MP – and have remained online ever since, as revealed on the Popbitch gossip website.

His refusal to change his phone number is said to have been a source of dismay among aides inside Downing Street over the years.

Metro.co.uk rang the number but the phone appeared to be switched off. WhatsApp messages have been delivered but have not been read.

The profile has the default image and ‘about’ message offered by the app.

Security at No10 is now involved after the number was used by the politician until tonight, The Independent reports. Downing Street has refused to comment.

It comes after the BBC revealed Mr Johnson promised Sir James Dyson he would ‘fix’ an issue over the tax status of his workers after he was privately messaged by the entrepreneur.

The UK leader said he made ‘absolutely no apology at all for shifting heaven and earth and doing everything I possibly could, as I think any prime minister would in those circumstances, to secure ventilators for the people of this country’.

Cabinet Secretary Simon Case is believed to have urged Mr Johnson to change his phone number last year in order to stop a barrage of texts from lobbyists, The Times reports.

Meanwhile, a ‘well-placed’ source told the Telegraph his continued use of WhatsApp was a ‘perennial problem’ for certain figures in Number 10.

Another source said: ’The problem with Boris is that he replies to everyone.’

They added that the PM was often trying to get people ‘off his back’, rather than offering special treatment.

Mr Johnson is under fire this month after the Electoral Commission decided to investigate his Downing Street flat refurb.

The Electoral Commission said it was satisfied there were ‘reasonable grounds’ to suspect an offence may have occurred in the controversial makeover. The PM has denied wrongdoing.