Boris Johnson says he will outline ‘target dates’ next week as part of his ‘roadmap’ out of the coronavirus lockdown.

But the prime minister warns he ‘won’t hesitate’ to delay plans if necessary.

‘If we possibly can, we’ll be setting out dates [next week],’ Mr Johnson told Sky News, while visiting a vaccination centre in Orpington, south London today.

‘Just to help people think about what we’re trying to do on the 22nd – just remember what we did around this time last year or a little bit later, we set out a roadmap going forward into the summer and looking a little bit beyond – that’s what we’re going to be trying to do.

‘The dates that we’ll be setting out will be the dates by which we hope we can do something at the earliest, if you see what I mean – the target date.

‘If because of the rate of infection we have to push something off a little bit, delay it for a little bit, we won’t hesitate to do that.

‘I think people would much rather see a plan that was cautious, but irreversible and one that proceeds sensibly and in accordance with where we are with the disease.’

It comes as the PM is planning to outline when and how England will come out of its third national lockdown next Monday, with schools expected to reopen first on March 8. 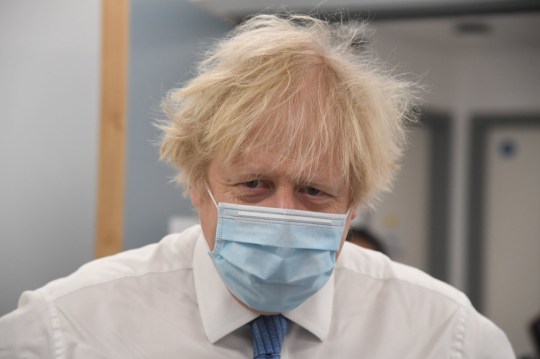 Prime minister Boris Johnson during a visit to a coronavirus vaccination centre at the Health and Wellbeing Centre in Orpington, south London (Picture: PA) 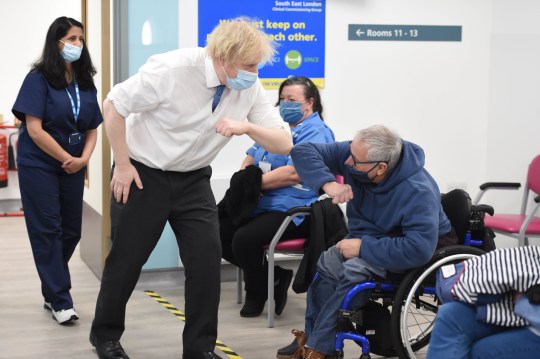 He greets patients, including Tony Garrett pictured here, during the visit (Picture: PA)

He said no decisions had been made on the ‘detail’ just yet, but stressed schools remain a priority for the Government.

Mr Johnson added lifting lockdown should be ‘irreversible’, with the hope measures would not need to be reintroduced again in the future.

‘Don’t forget they’re still very high, still 23,000 or so Covid patients in the NHS, more than in the April peak last year, still sadly too many people dying of this disease. Rates of infections, although they’re coming down, are still comparatively high.

‘So we’ve got to be very prudent and what we wanted to see is progress that is cautious but irreversible and I think that’s what the public and people up and down the country will want to see.’

His comments come as it was revealed the Government has hit its target of offering everyone in the top four priority groups across the country the Covid-19 vaccine by February 15.

Meeting this milestone paves the way for the next phase of the the rollout, which will cover the next five priority groups, including the over 50s.

NHS England has already sent out 1.2 million invitations to the over 65s to book an appointment, with a similar number expected to go out this week.

The next target for the Government is offering a vaccine to the estimated 17 million people in the next five groups by the end of April.