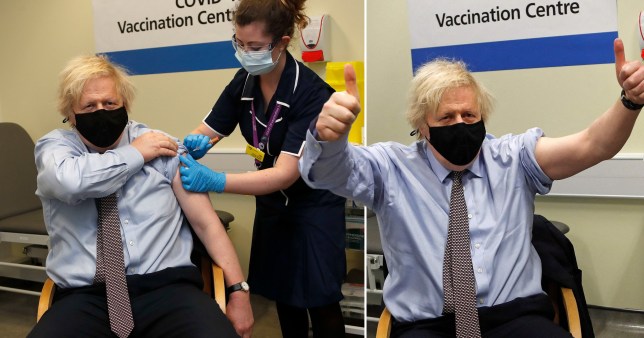 The Prime Minister said he ‘literally did not feel a thing’ after getting the jab (Picture: AP)

Boris Johnson has received his first dose of the AstraZeneca Covid vaccine amid ongoing problems with the supply of doses.

The Prime Minister, 56, was given the jab around 6pm today at London’s St Thomas’ Hospital, where he was treated in the ICU after coming down with a severe case of coronavirus last April.

It comes after the European Medicines Agency (EMA) reaffirmed the vaccine was ‘safe and effective’.

As he left the hospital, the Conservative leader told reporters: ‘I literally did not feel a thing and so it was very good, very quick and I cannot recommend it too highly. Everybody when you get your notification please go and get your jab.’

Speaking directly to those nervous to get the vaccine, he said: ‘Don’t just listen to me, listen to all the scientists, listen to what the European Medicines Agency had to say yesterday, to what the MHRA has said. The risk is Covid – this is a great thing to do.’

After hearing the news, Health Secretary Matt Hancock tweeted: ‘Delighted that the PM has been vaccinated with the Oxford/AstraZeneca jab.

‘Each jab brings us one step closer to normal, so follow in the PM’s footsteps & come forward to get the jab when it’s your turn.’

The NHS extended the rollout to include all over 50s on Monday, making the PM eligible for the vaccine for the first time.

It comes after the brakes were put on the programme because of supply chain problems. A planned delivery of five million doses from India has been delayed by four weeks and 1.7million doses have to be re-tested as a precaution. 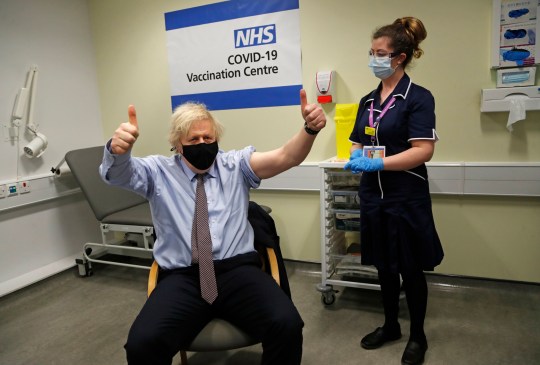 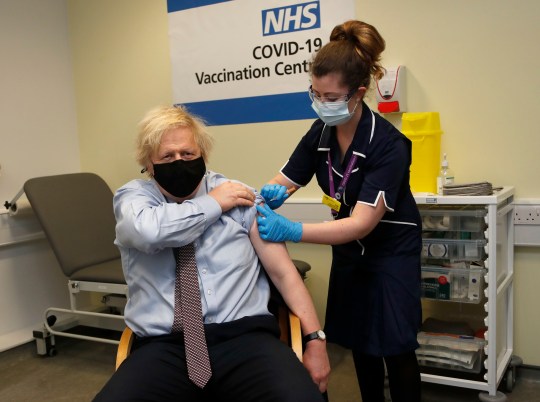 The AstraZeneca vaccine was administered by nurse and Clinical Pod Lead, Lily Harrington at St.Thomas’ Hospital in London (Picture: AP)

Yesterday Mr Johnson confirmed the UK would have ‘fewer vaccines than we had planned’ in April, potentially delayed the date when under-50s will start being vaccinated. Doctors had planned to start on this group next month.

French prime minister Jean Castex also received the AstraZeneca vaccine on Friday, after his country resumed using it after being reassured by regulators over blood clot concerns.

France, Italy and Germany have confirmed they will resume rollout of the Oxford shot on Friday, while Spain, Portugal and the Netherlands said they will follow suit next week, although Spain said it could exclude certain groups.

Mr Johnson told a Downing Street press conference on Thursday: ‘The Oxford jab is safe and the Pfizer jab is safe.

‘The thing that isn’t safe is catching Covid, which is why it is so important that we all get our jabs as soon as our turn comes.’

On Thursday the EMA said the benefits of getting the AstraZeneca vaccine outweighed the risks but it could not rule out definitively a link between ‘a small number of cases of rare and unusual but very serious blood clotting disorders’.

In the UK, the Medicines and Healthcare products Regulatory Agency (MHRA) concluded that any link between the jab and clots is unproven.

Mr Johnson has urged the population to continue taking up the offer of the vaccine so that the planned roadmap out of lockdown can continue.

He’s promised not to let his plans for relaxing restrictions be hindered by a slump in vaccine supply.

READ MORE: How to spot the signs of a blood clot

Skepta hints he might be retiring after one more song