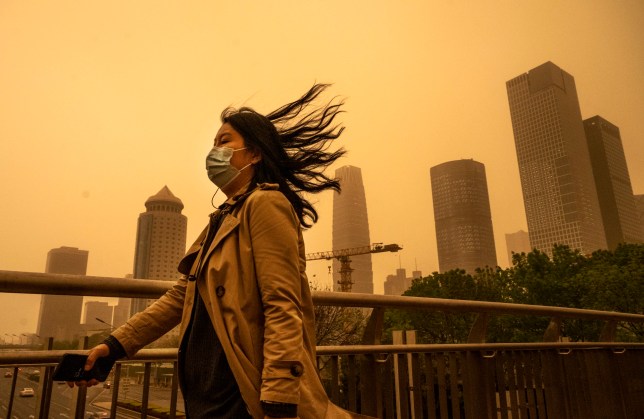 The capital’s air quality index, which measures how many pollutants are in the air, increased to 324 yesterday. Authorities said this was due to sand and dust particles being blown in from northern China.

A score of 151 to 200 is considered ‘unhealthy’ while a score above 300 is deemed ‘hazardous’. According to the Swiss IQAir app, the level worsened in the evening and rose to 1,300 in some parts of the city.

The polluting particles came from Mongolia and strong winds are expected to carry them further into eastern China by Friday, according to the China Meteorological Administration.

There was less sand in the air than during two sandstorms in northern China last month, but the wind speed was higher, allowing the dusty weather to travel faster and farther, according to the meteorological administration. 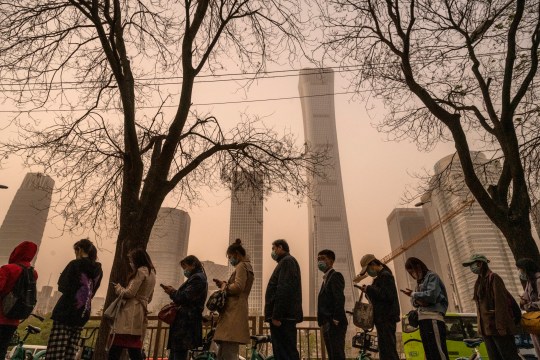 Commuters wait for bus as sand and dust fill the air in Beijing (Picture: Getty) 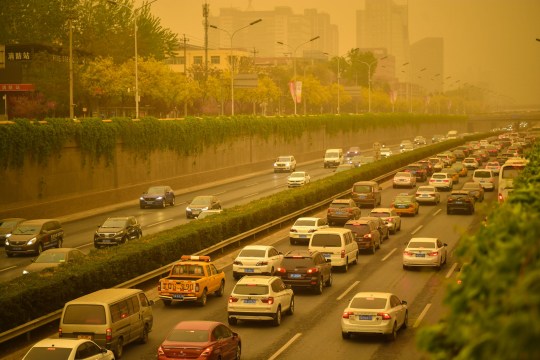 Traffic continued as normal as skies turned orange due to sand blast in Beijing (Picture: Getty)

‘I don’t feel good. We have had several dust storms this year,’ said Gary Zi, a 48-year-old Beijing resident working in the finance sector.

‘The (air) quality is much worse than in previous years,’ he added. ‘Breathing becomes difficult. Sand gets into your eyes and your nose.’

China typically places blame for its annual sandstorms on Mongolia’s Gobi desert and has been planting millions of trees along its border to create a ‘Great Green Wall’ to block out future storms. 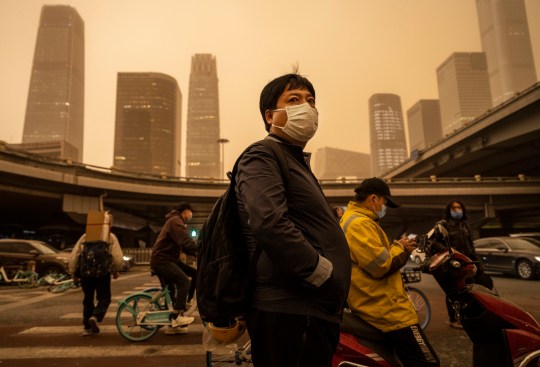 Delegates from China’s arid Gansu region claimed to parliament last month that over half of annual dust storms in China come from abroad, mainly from the south of Mongolia.

‘I feel it is all climate change,’ said another Beijing resident as he wiped the dust from his motorbike near the China World Trade Center, giving only his surname, Xie. ‘(We) can’t do much about it.’