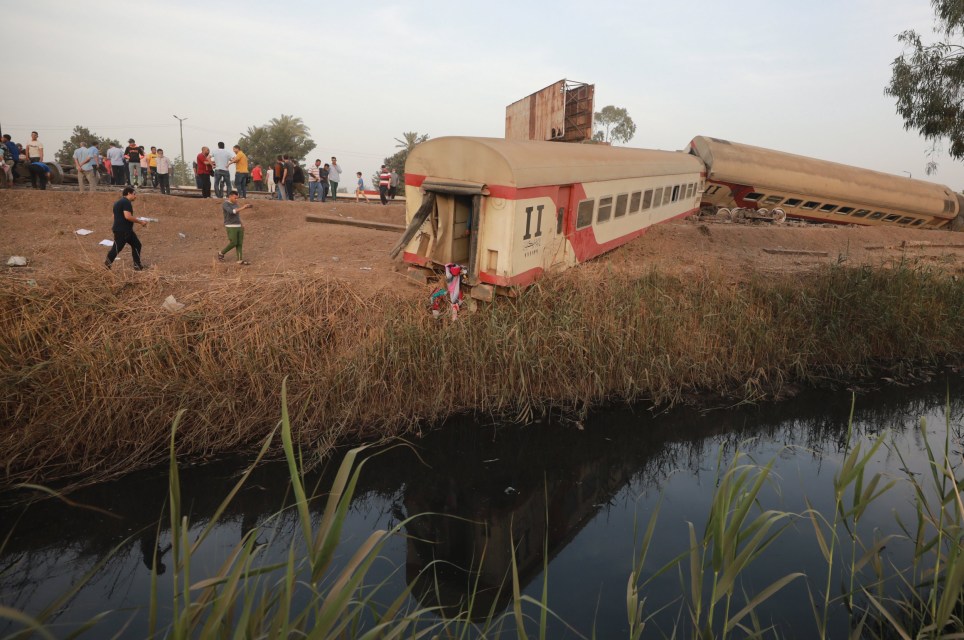 The train derailed on Sunday in the latest rail accident in Egypt (Picture: EPA)

At least 11 people have died in a horrendous train crash north of Cairo on Sunday, Egyptian authorities say.

Pictures show a scene of devastation and chaos in Qalyubia province following the incident, which is thought to have left another 100 or so people injured.

More than four carriages ran off the railway at Banha, with videos on social media showing wagons overturned and passengers escaping to safety along the railway.

The Health Ministry says in a statement that at least 98 others were injured in the latest safety failing on the Egyptian railways.

The derailment of the train, travelling to the Nile Delta city of Mansoura from the Egyptian capital, is the latest of several rail accidents to hit the country in recent years.

Around 60 ambulances were sent to the scene and the injured were taken to nearby hospitals, the ministry added.

It was not immediately clear what caused the crash but prosecutors say they are investigating. 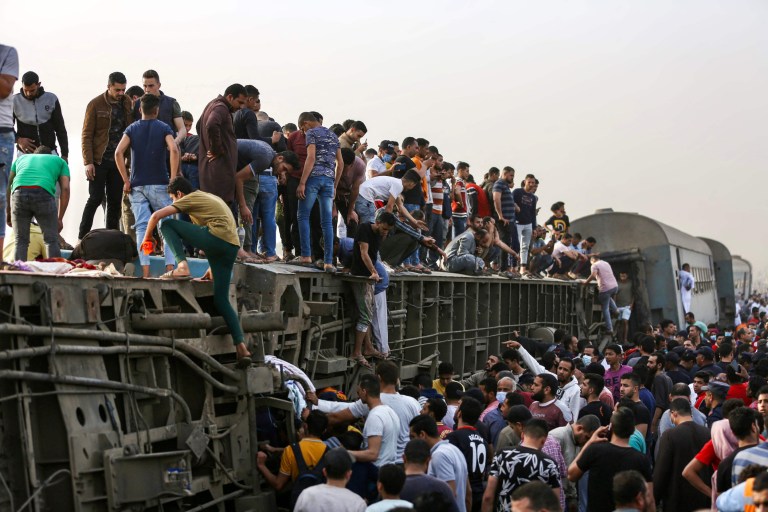 People climb on to an overturned carriage at the scene (Picture: AFP) 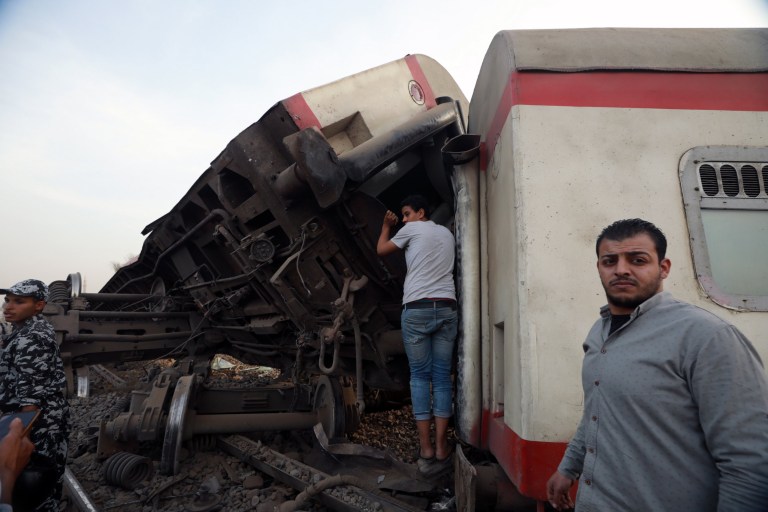 Around 100 people were injured in the incident and at least 11 are dead (Picture: EPA)

It is also not known how fast the train was going at the time of the accident, but pictures suggest it was travelling at some speed.

Salvage teams could be seen searching for survivors and removing the derailed wagons earlier on Sunday.

Last week, at least 15 people were injured when train carriages derailed in the Nile Delta province of Sharqia.

Sunday’s accident came three weeks after two passenger trains collided in the province of Sohag, killing at least 18 people and injuring 200 others, including children.

Prosecutors said they found that gross negligence by railway employees was behind the deadly March 25 crash, which caused public outcry across the country.

Train wrecks and mishaps are common in Egypt, where the railway system has a history of badly maintained equipment and mismanagement. 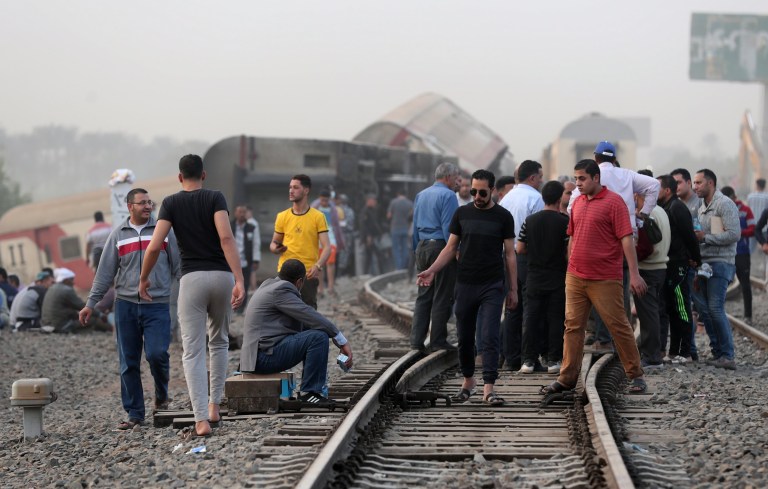 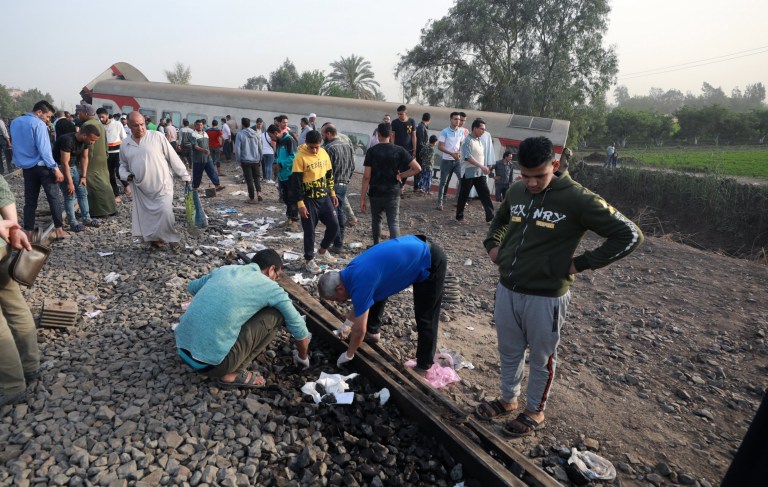 The cause of the crash is not yet known (Picture: EPA)

Hundreds of train accidents are reported each year.

In February 2019 an unmanned locomotive slammed into a barrier inside Cairo’s main Ramses railway station, causing a huge explosion and a fire that killed at least 25 people. 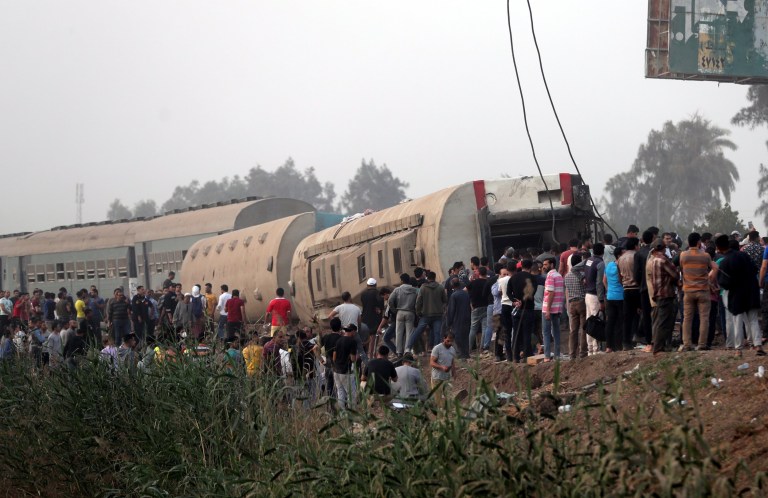 Cranes were used to move the overturned carriages (Picture: EPA) 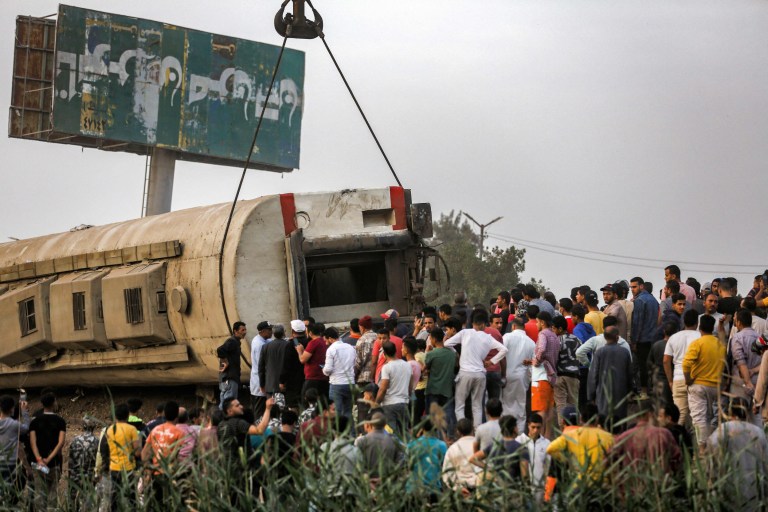 That came after a similar incident the year before, when at least 51 people were killed after two commuter trains collided near Cairo.

Egypt’s deadliest train crash was in 2002, when more than 300 people were killed after a fire broke out in an overnight train traveling from Cairo to southern Egypt.

President Abdel Fattah el-Sissi said in March 2018 that the government needs about 250 billion Egyptian pounds, or $14.1 billion, to overhaul the run-down rail system.

The government says it has launched a broad renovation and modernisation drive to improve rail safety.

Chvrches announce premiere of new single ‘He Said She Said’