Army generals considered blaming a ‘mid-ranking officer’ who ‘overstepped his remit’ as they de-platformed a member of Extinction Rebellion (XR) from a leadership conference.

Chris Taylor was removed from the Centre for Army Leadership (CAL) panel after they decided to distance the online event from the ‘overtly political’ group and its civil disruption tactics.

The top brass exchanged emails discussing ways of going public on Twitter about his removal – or justifying his inclusion – that have been released to Metro.co.uk by the Ministry of Defence.

A barrage of criticism had greeted an announcement of Mr Taylor’s inclusion to discuss ‘leadership in a time of social collapse’ made by CAL in social media posts on November 8 last year.

Entitled ‘CAL Conference Twitter post – possible responses’ in the subject line, the thread shows how the decision was taken at a high level in a hasty U-turn the following morning.

Major General Duncan Capps, Commandant Royal Military Academy Sandhurst (RMAS), wrote: ‘We will make public the removal of Chris Taylor immediately from the Culture and Leadership event CAL is running on 1 Dec. We will do it under my name and authority as Dir Leadership but using the CAL Twitter feed to avoid the inevitable conflation of RMAS with this noting my Twitter handle.

‘We will make the point that no payment was to be made and that the intent was to seek broad and diverse views but that on reflection it is clear that the Army cannot align itself with any organisation (however noble its purported aims) that uses tactics or methods that break the law.’ 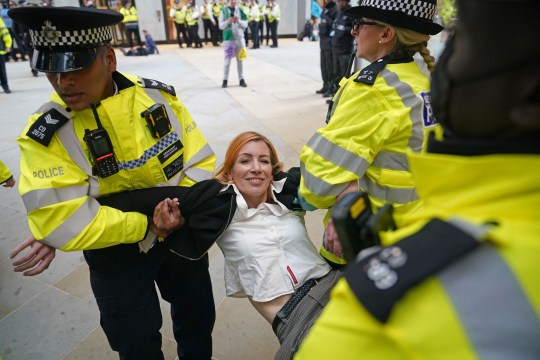 Police carry away an Extinction Rebellion activist who glued herself to the reception of the Shell building on the Southbank in London (Picture: Yui Mok/PA) 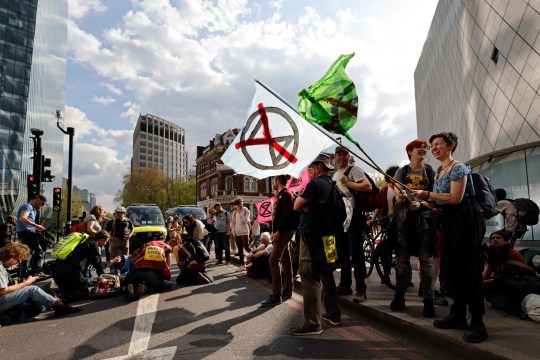 Major General Neil Sexton had earlier outlined two options in the group email discussion on November 9, which has been released to Metro.co.uk under the Freedom of Information Act.

‘Make it known to journalists that this was a middle ranking officer who was seeking a broad line-up of speakers but that it would be inappropriate to spend public money (if that is the case) to hear the views of such an overtly political organisation.

‘The officer over-stepped his remit, didn’t inform any of the Army’s senior leadership of his plan and now recognises this was an ill-judged attempt to ensure the Army understands the approaches of leaders of organisations from across our society.

‘Worst outcome is: Army chief cancels/no-platforms Extinction Rebellion with the implication that we are closed to outside ideas.’ 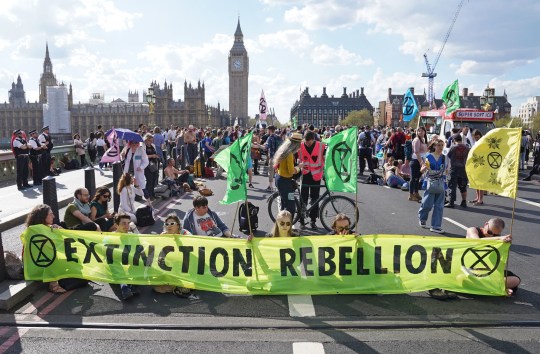 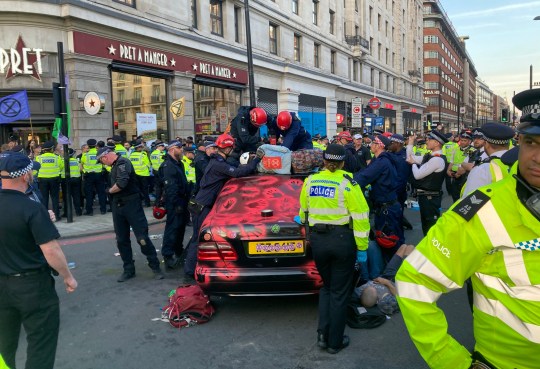 The generals were also given the option of leaving Mr Taylor, who is part of XR’s ‘vision sensing group’, on the line-up for the conference, which was held to ‘explore the symbiotic relationship between leadership and culture’.

The proposal reads: ‘Let it run but confirm that the speaker receives no fee and that he is just one of x speakers during a day discussing leadership approaches used across many elements of UK society including business, sport, politics and activism.

‘This is indicative of an Army that is trying to learn from others across a broad spectrum etc. The problem is that the headline will run: Army invites XR to teach it leadership.’

Later on, the decision was made to disinvite Mr Taylor, with the generals and media handlers then discussing how to deal with a query from the i newspaper about XR’s inclusion in time for the journalist’s deadline.

A person, whose name has been redacted, wrote: ‘We may well miss the boat on this one. I will try and talk the journalist down in vagaries.’

Themed around ‘leadership and culture’, the conference went ahead without Mr Taylor. Hosted by author Simon Sinek and also platforming British Olympic gold medal-winning hockey player Kate Richardson-Walsh, the forum was part of CAL’s commitment to the ‘betterment of the whole Army – all ranks, regular and reserve’.

Mr Taylor told Metro.co.uk: ‘I was disappointed when I was deplatformed. I was looking forward to speaking to the Army and I thought it was an important conversation to have and I wanted to open a dialogue with them. Military strategists around the world are starting to realise that climate change is going to be a big potential threat to peace and security and I wanted the Army leadership to really start taking that seriously. I thought we could have had a really useful conversation.’

Responding to the justifications for XR’s removal, Mr Taylor said: ‘I wanted the military to know they have nothing to fear from XR. We are peaceful and we have got everyone’s interests at heart. We are here for them and their children and their grandchildren.’

While the CAL encourages diverse thinking and alternative views, we recognise the challenge of inviting a member of XR to speak at our conference. At the direction of the Armyâs Director Leadership, Chris Taylor will no longer attend.

The lifelong pacifist also wrote in the i that he would have told the audience that climate change is a ‘major threat to peace and global stability’ and ‘the true calling of the warrior is to preserve peace, to protect the vulnerable, both human and environmental’.

The Home Secretary has branded XR ‘criminals’ over the group’s controversial tactics, which have included 11 naked activists glueing themselves to the glass of the public viewing gallery overlooking the House of Commons chamber.

Supporters of offshoot group Insulate Britain have since blocked major roads and motorways across England, prompting angry confrontations with drivers and leading the government to take activists to court and seek new legislation outlawing their tactics.

In the Queen’s Speech on Tuesday, the government unveiled plans to prohibit ‘locking on’, the method used by protesters who lock or glue themselves together or to buildings.

The Public Order Bill is said by Priti Patel to target ‘outrageous behaviour’ after ‘the law-abiding, responsible majority have had enough of anti-social, disruptive protests’.

In other measures aimed at clamping down on guerilla-style disobedience, interfering with infrastructure such as airports, railways and printing presses would also be made an offence.

An Army spokesperson said: ‘While the Centre for Army Leadership encourages diverse thinking and alternative views, it was decided before last year’s event that the Army cannot align with an organisation that uses methods which potentially break the law. As such, the invitation was rescinded.’