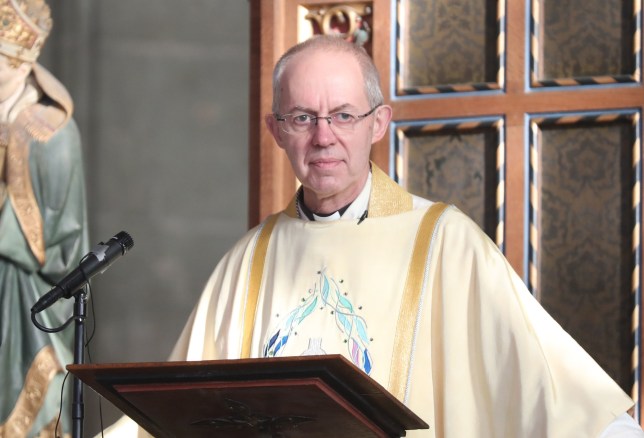 A memorial service for Prince Philip is taking place in Canterbury Cathedral.

The Archbishop of Canterbury Justin Welby is leading the service, which began at 10.30am.

He described the experience of grief as varied between people, saying ‘we cannot judge. We must not say we know. We can only pray and affirm.’

He said that for the Duke of Edinburgh, there was a remarkable willingness to take the hand he was dealt in life and follow its course.

Prayers were held for Prince Philip as well as those grieving for him, and for others who have recently passed.

Giving a reflection from the chapel at Lambeth Palace yesterday evening, Mr Welby said Philip had been someone with a ‘deep and genuine sense of service and humility’. 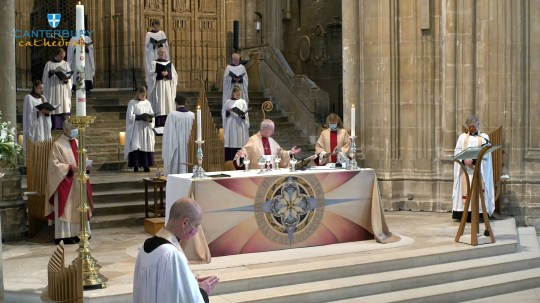 He said: ‘It wasn’t “me, me, me”. It was about the world, about those he served, and in doing that his own role was more and more significant.

‘He had a righteous impatience. He would not accept the status quo. If things were not right, he would say so and say so quickly, and clearly, and often bluntly.

‘Prince Philip, also though, had a deep and genuine sense of service and humility.’

He described him as someone who ‘knew the talents he had and what he could bring, and he brought them 100%, at full throttle, right through his life’.

The duke died peacefully in his sleep at Windsor Castle on Friday, two months before his 100th birthday.

The UK is officially in a period of national mourning for the next week, up to and including Philip’s funeral on Saturday afternoon.

Former archbishop of York Dr John Sentamu said the Duke of Edinburgh and the Queen’s marriage was so strong because they were ‘so deeply rooted in Jesus Christ’.

Speaking to The Andrew Marr Show, he said he and the duke first discussed Christianity when Philip was worried about his children and their marriages.

He said: ‘I said, ‘well, your royal highness, you are a family like any other family, and every family goes through good times and bad times – the important thing for me is that you should realise that if people are married they are not just a couple, there is a third and that’s Jesus Christ, and they should begin to go to Jesus Christ’.

‘He said, “Of course, the Queen and I are so strong in Jesus Christ”.

‘There was this unbelievable depth of his rootedness, because he was so rooted in Christ, he didn’t have any problem in relating to people about their faith or people who didn’t believe at all.

‘His faith was so strong, rooted in Christ, rooted in reality, rooted in his family, that he could be a free person. I have not met a couple that are so free – Her Majesty is exactly the same.’