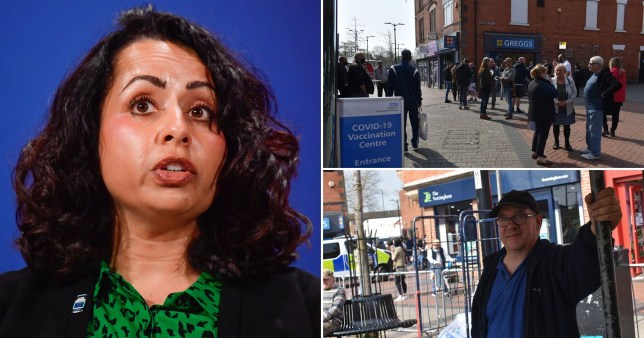 An anti-vaccine protest in Nottingham has been blasted by a high-profile NHS official.

The medical director of primary care for NHS England said at Tuesday’s Downing Street press conference that ‘we will not stand for it’ after suggesting that anti-vaxxers targeted a mobile vaccination unit in a bus.

One stallholder in a market near where the protest was taking place told Nottinghamshire Live that some people queueing for a jab left because the crowd was intimidating them.

A small group of people were shouting ’we want our freedom back’ and distributing leaflets at Bulwell Market, the paper reported.

This evening, NHS England’s Dr Nikita Kanani said: ‘I heard today that a group of people were protesting outside of a mobile vaccination bus in Nottingham.

‘I want to say now that we will not stand for it. It is of vital importance that you allow our colleagues to do the job that they need to do, that you allow them to save lives by vaccinating people.

‘And as the PM says, you allow our teams to get us back to the lives that we love and that we miss so much.’

She had earlier showered praise on NHS staff and the vaccination programme and called on the public to ‘make sure that you look after our staff’.

It comes after around 15 people were seen shouting at those queueing up for a jab.

the group made unfounded claims about the vaccine and authorities during the protest, which started at 10am and ended around 1pm, according to Nottinghamshire Live.

Stallholder Melissa, 37, said: ‘There were many people in the queue this morning waiting to have their vaccine, and some left because the crowd was intimidating. 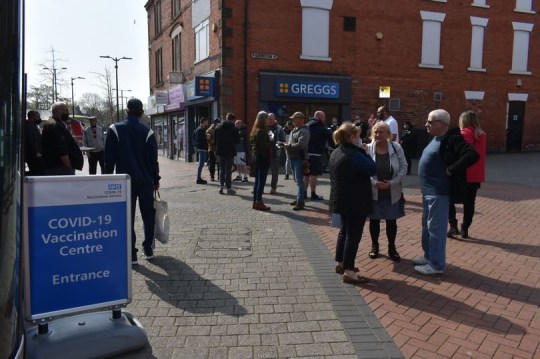 ‘It has affected the atmosphere in the market today, definitely.

‘You would usually see so many people smiling here, but today a small group is just shouting about Covid.’

Fellow stallholder Ian Astil, 48, agreed, adding: ‘People will get intimidated by that.

‘They are spreading misinformation and scaring people.’ 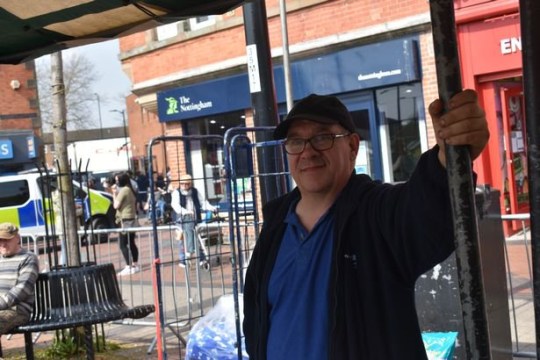 Andy Savage said he did not think the protests would influence people (Picture: Nottingham Post/BPM Media)

Andy Savage, a retired NHS worker who was assisting his friend, said: ‘I think that having the vaccine is a risk that most of us are willing to take, and these protests will not influence people.’

One woman thought to have been involved in the protest claimed ‘false information’ had been given over the jab and that it was ‘sad to see these frightened people getting their jab today’.