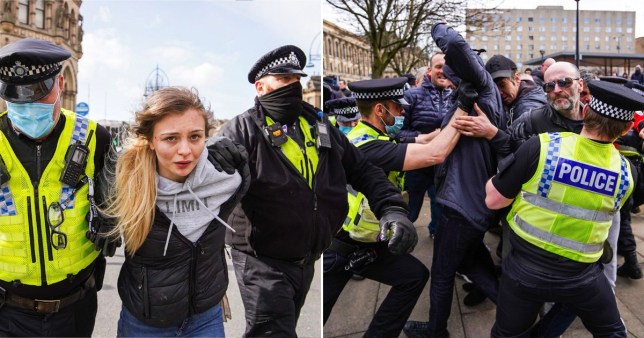 A small group of protesters tried to storm a vaccine clinic (Picture: LNP)

Police arrested 13 people at an anti-lockdown demonstration today after a group of ‘troublemakers’ tried to storm a vaccination centre.

A group of around 400 made up of anti-lockdown campaigners, anti-vaccination groups and anti-government protesters faced off with officers in Bradford on Saturday afternoon.

The group, thought to be called The North Unites, gathered to listen to an anti-lockdown speech between City Hall and Bradford Magistrates’ Court before moving on to Centenary Square.

West Yorkshire Police said the majority of demonstrators’ behaviour was ‘peaceful’ – but some ‘attempted to cause disruption’ by heading for a vaccine clinic.

The force said in a statement: ‘Many of those who attended were not believed to have been from the Bradford area.

‘Whilst the majority of protesters were peaceful, some protesters attempted to cause disruption by making their way to a vaccination centre in the city.

‘Officers intervened to stop this from happening. At no time were any vaccination centres or testing centres affected.’

They said 13 people have been arrested on suspicion of a number of offences including public order. 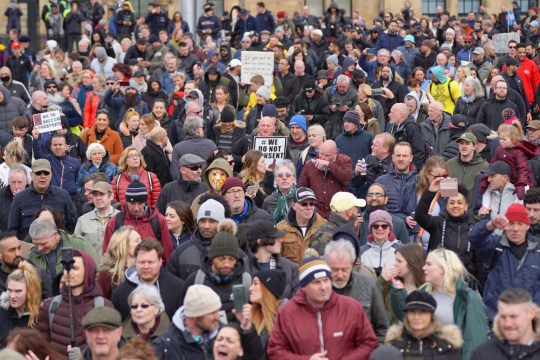 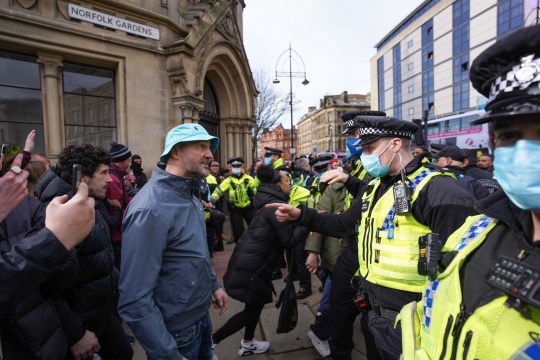 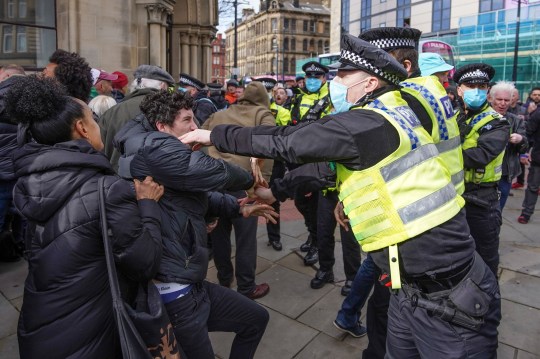 Police said much of the protest was ‘peaceful’ but some demonstrators travelled in to the city ‘to cause trouble’ (Picture: Ioannis Alexopoulos/LNP)

Oz Khan, of West Yorkshire Police, said: ‘We are grateful to the communities of Bradford, who have attended the protest in a peaceful way.

‘However, there was a group of people who had travelled from outside the Bradford district to cause trouble. 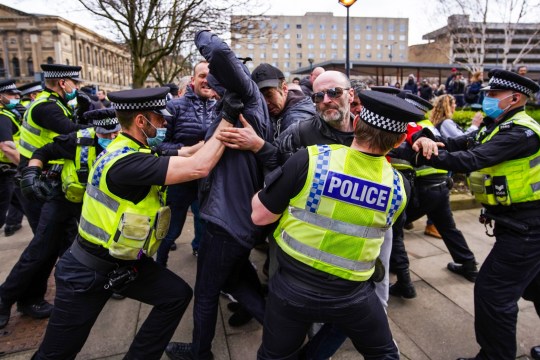 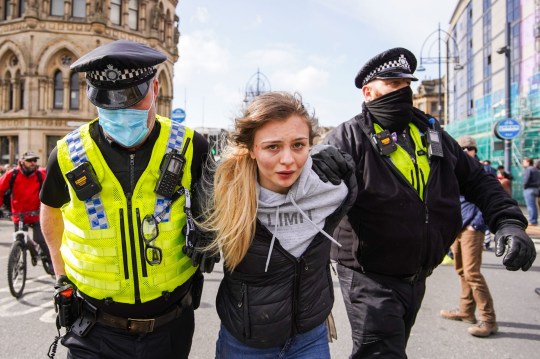 ‘Protest policing is challenging and complex – and even more so during these unprecedented times and public safety is, and always will be the police’s top priority.

‘There was a small group of protesters who tried to break away from the protest and make their way to a vaccination clinic, officers intervened to stop this from happening.

‘The majority of people were peaceful, and I am pleased to say there was no significant disorder.’ 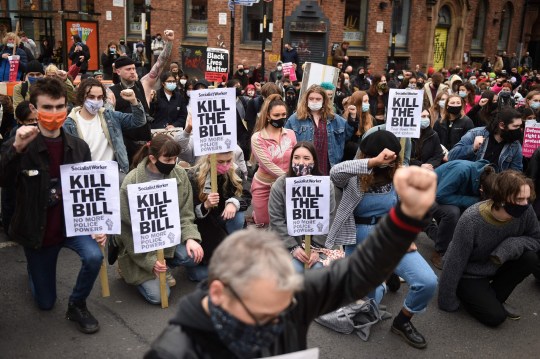 ‘Kill the Bill’ demonstrations have taken place across the country (Picture: AFP via Getty Images)

Meanwhile, demonstrators took to streets across the country on Saturday for further Kill The Bill protests – including in Manchester, Brighton, Bath and Sheffield.

Eighteen people were arrested after protesters blocked tram lines in Manchester, though police said the demonstration was ‘largely peaceful and without issue’.

Some 300 people initially joined a protest march through Bristol city centre against the Government’s new Police, Crime, Sentencing and Courts Bill on Friday night, before the crowd swelled to more than 1,000 as tempers flared.

Police officers wearing helmets and holding shields moved towards the protesters after 10pm, after calling for the crowd to disperse due to Covid-19 restrictions.

Avon and Somerset Police said glass bottles, bricks and eggs were thrown at officers and fireworks were launched at its mounted division, with one horse being daubed with paint.