Andrew Bridgen cited ‘further revelations over the past week’ as the reason over his no-confidence letter in the PM (Picture: Getty /Reuters)

A no-confidence vote in Boris Johnson is looking more likely as a third Tory MP has called for the prime minister to resign today alone.

Brexiteer Andrew Bridgen emailed his North West Leicestershire constituents to say he has re-submitted his letter citing ‘further revelations over the past week’.

It appears as Sue Gray’s long-awaited report into Downing Street and Whitehall parties has sent shockwaves through the Conservative Party. Mr Bridgen suggested the tally may now be ‘close’ to triggering a ballot.

‘I did believe that during the initial stages of the Russia/Ukraine war that it would be wrong to have a leadership contest,’ the rebel MP wrote.

‘There have, however, been further revelations over the past week and there is obviously and rightly still a lot of anger about the culture in No 10 during the lockdown period. 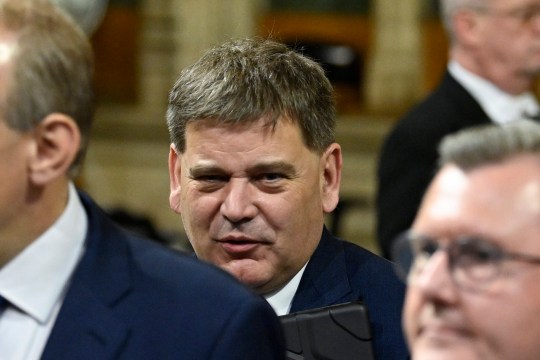 The Tory MP originally submitted such a letter in January this year (Picture: Getty)

‘This would give the parliamentary party the opportunity to register whether they believe Boris Johnson is the person to continue leading the party or not.’

Originally submitting a letter in January, Mr Bridgen withdrew it in March, arguing that it was not appropriate amid the fighting in Ukraine.

As more and more of his colleagues choose to publicly voice their opposition against the MP, his stance must have changed.

Mr Wright said events in Downing Street had caused ‘real and lasting damage’ to the government’s authority and that he had concluded ‘with regret’ that the PM should go.

For a leadership election to be triggered, 54 formal no-confidence letters have to be submitted – 15% of the parliamentary Conservative Party.

So far, 25 MPs have publicly said that Mr Johnson should go – but more are likely to have written to the chairman of the 1922 committee privately.

As part of his role, only Sir Graham Brady will know the true number.

After weeks of waiting for Ms Gray’s damning report to be finally published, MPs’ anger is coming out in the open.

The growing number of no-confidence letters coincide with No 10 failed to deny a report that Carrie Johnson – the PM’s wife – hosted a second party in their flat for his 56th birthday.