The Pride of Kent has been detained but the details of why have not been revealed yet (Picture: EPA)

A second P&O ferry has been detained as it was unable to pass safety inspections after the business fired hundreds of its workforce.

The shipping company has faced fierce criticism, from both the public and the Government, for its decision to replace 800 seafarers with agency workers who are paid less than minimum wage.

Last Friday, a P&O ferry was held in Northern Ireland after it was declared ‘unfit to sail’ because of ‘failures on crew familiarisation, vessel documentation and crew training’.

Now, another ferry – the Pride of Kent – is being detained in Dover.

The Maritime and Coastguard Agency (MCA) made the announcement on Monday evening although specific reasons for the decision are yet to be revealed.

The government agency previously said it was planning to check the Pride of Kent before a full inspection. It added that it would also look at passengers and cargo at a later date.

But a later statement said: ‘Our surveyors are in the process of detaining the Pride of Kent. We are awaiting confirmation of all the detainable items.’ 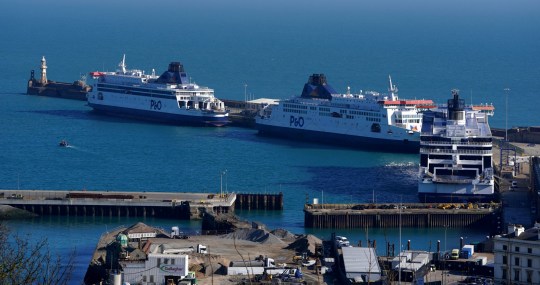 It comes after transport secretary Grant Shapps said he will not compromise the safety of P&O vessels, insisting the company will not be allowed to rush training for inexperienced workers.

MPs are expected to try and close a legal loophole allowing foreign firms to pay staff less than minimum wage if they are travelling outside of the UK when they assess a new bill later this week.

Current laws only require ferry workers to be paid the minimum wage while travelling between British ports.

Mr Shapps has told P&O Ferries’ millionaire boss he had ‘little choice’ but to reverse the mass firings.

In a letter, he said: ‘Through that package (the bill), I intend to block the outcome that P&O Ferries has pursued, including paying workers less than the minimum wage.’

Although P&O is facing pressure to rehire the seafarers based on their original contracts, it is understood that some 430 people have already accepted the company’s ‘blackmailing’ severance package.

P&O said in a statement on Monday afternoon: ‘We fully welcome the government’s commitment to increasing the minimum wage for all seafarers working in British waters.

‘From the outset we have called for a level playing field when it comes to pay and conditions on British ferry routes.

‘Our announcement is not about reducing seafarer’s wages, it is to enable us to have a fully flexible crewing model that allows us to meet the demands of our customers.

‘The predicted savings we announced are not solely coming from the reduction in wages, but from removing job duplication and the benefits we will see from increased flexibility.’