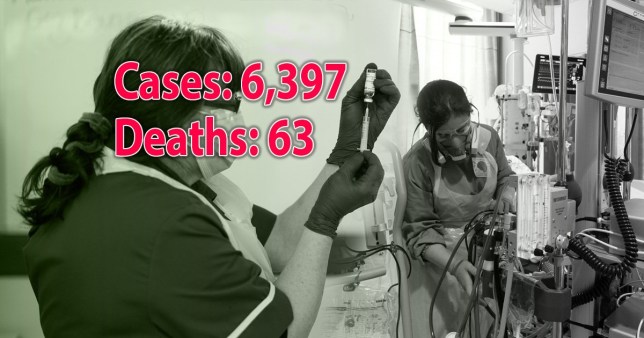 Cases and deaths are falling across the country (Picture: Metro.co.uk)

Another 63 people have died with Covid while a further 6,397 people have tested positive.

It brings the overall death toll since the start of the pandemic to 126,445 while more than 4.3 million cases have been recorded.

The figures from the Department of Heath come after the NHS emergency alert level was downgraded from four to three as the number of hospital admissions continues to fall.

Sir Simon Stevens, the chief executive for NHS England, confirmed the news as the country steadily eases out of a third national lockdown amid a successful vaccine rollout.

Level three means Covid is in general circulation, while the most severe level four means transmission is high or rising exponentially. 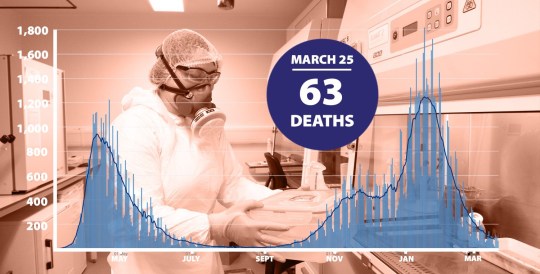 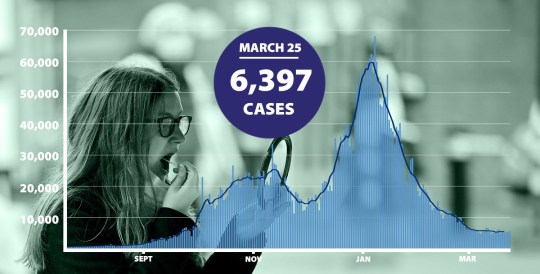 Sir Simon said: ‘We had over 34,000 severely ill coronavirus patients in our hospitals in mid-January.

‘That number is now 4,000 and although that is still about 400 more Covid patients than we had this same day a year ago, nevertheless that very sharp decrease in the number of patients with Covid in hospital is a consequence of both declining infection rates across the community and the impact that’s now being felt from the vaccination programme.

‘As a result of those much reduced acute pressures on the health service, today I’m recommending that we reduce the national alert level across the health service from level four to level three, and that would take effect today.’

The rollout of vaccines is expected to slowdown next month due to a slump in supplies.

Earlier, over-50s were urged to book their appointments before slots dry up and some centres close. 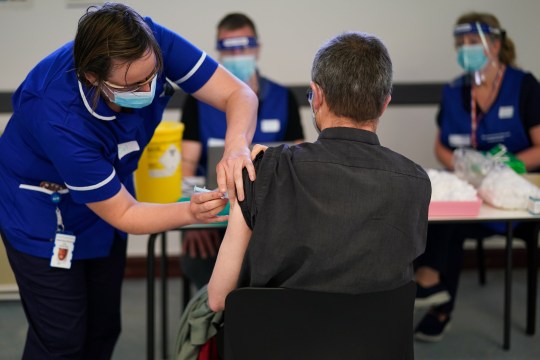 The vaccine rollout is expected to slowdown next month (Picture: Getty)

Ministers have insisted the supply issue won’t affect the roadmap out of lockdown or the target to vaccinate all adults by the end of July.

From Monday March 29, groups of six people will be able to meet outdoors in the next stage of restrictions lifting.

That will be followed by the reopening of shops, hairdressers and outdoor hospitality on April 12.

Covid cases are falling across the majority of England, though a new cluster has emerged in the Midlands.

Rates are now the highest among people between the ages of 10 and 19, a new report from Public Health England (PHE) has shown.

The group is then followed by 30 to 39-year-olds and those between the ages of 20 and 29. The data revealed that the lowest Covid rates are now among those aged between 70 and 79.

Although the UK appears on its way out of the pandemic, MPs have today voted in favour of extending emergency Covid laws until the autumn.

The Coronavirus Act came into force in March last year as the pandemic first hit UK shores. It gave the Government the power to shut down venues and restrict people from travelling as part of the nationwide effort to contain the virus.

Its renewal passed through the Commons today with 484 votes to 76, creating a majority of 408.

A gene defect may make rabbits do handstands instead of hop