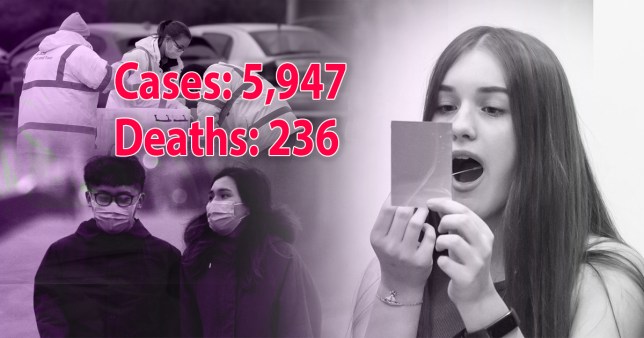 Another 236 people have died of Covid within 28 days of testing positive, bringing the UK’s death toll to 124,261.

A further 5,947 new cases were also recorded in the past 24 hours, which is more than a 30% drop compared to this time last week.

Deaths, cases and hospital admissions are all falling across the country amid the successful vaccine roll out.

The Department for Health figures show that more than one million people have now received both doses of a Covid jab.

Meanwhile, more than 21 million people have had their first dose, which is equivalent to two fifths of the UK’s adult population.

Health Secretary Matt Hancock today praised the rapid immunisation programme and said the country was on target to offer all over 18s a jab by the end of July.

He said the UK was ‘heading in the right direction’ in its fight against the pandemic, spurring hope lockdown can be lifted as planned. 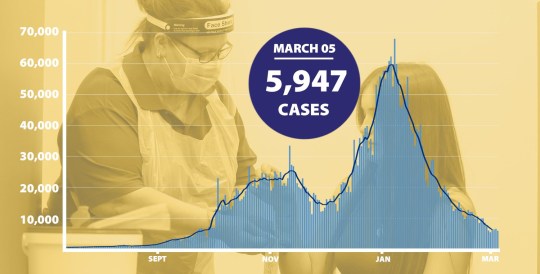 Cases have dropped by more than 30% compared to last week (Picture: Metro.co.uk) 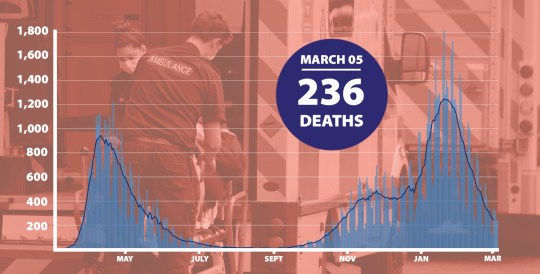 Schools in England will open on Monday, March 8, when Brits will also be able to meet up with one person from another household for a coffee or picnic.

Mr Hancock said cases have fallen by 34% in the past seven days and the 29% fall in hospital admissions over the same period is the fastest decrease at any point in the pandemic.

Deaths have also fallen by 41% in the last week.

Mr Hancock told a Downing Street press conference: ‘What this all shows is that the link from cases to hospitalisations then to deaths that had been unbreakable before the vaccine, that link is now breaking.’

He added: ‘My summary is that things are moving in the right direction. These are challenging times but thanks to the vaccine we’re making progress. We’re not there yet, so as we go down the road to recovery it’s vital everybody still plays their part, follows the rules and of course, when the call comes, get your jab.’

Mr Hancock also confirmed the missing case of the ‘concerning’ Manaus variant has been tracked down.

The heath secretary said the mystery person – who did not fill out their contact details correctly when they tested positive for Covid – was found to be living in Croydon.

Surge testing will now be deployed to the south London area.

Mr Hancock said that this was a precautionary measure as the person appears to have stayed indoors and there was no sign of any onward transmission.

Despite cases falling, the R rate crept back up today for the first time since January.

R measures the number of people, on average, that each sick person will infect. If it is below one, the virus is seen to be shrinking.

Figures from the Office for National Statistics show Covid cases are falling across England, though numbers are still higher than what they were last summer.

Who is Pete Sandiford from Gogglebox’s fiancee?