Activists say they will target the industry ‘day after day’ later this year (Picture: Reuters/PA/AP/Animal Rebellion)

Vegan activists say they are threatening to heavily disrupt the UK supply of dairy ‘day after day’ this September.

Industry insiders are likely to be infuriated by the move, which comes in the midst of a cost-of-living crisis and major issues with global trade.

Animal Rebellion did not immediately elaborate on their plans – which could affect the availability of milk, cheese and yoghurt – in an apparent effort to keep them secret and increase their impact.

But in a promotional video unveiling their campaign, activists said that this September ‘we are going to cause large-scale material disruption to the supply of dairy, day after day across the country.’

They added: ‘We want to put the damage and exploitation of the dairy industry at centre stage.’

Earlier this year, eco activists badly disrupted the supply of fuel to the country by targeting oil depots. 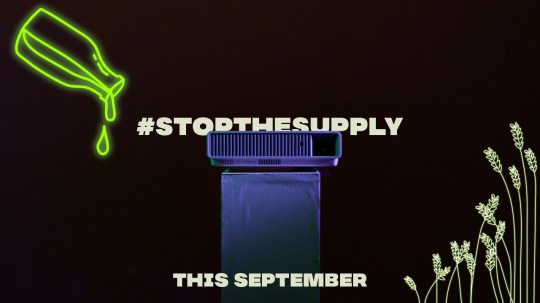 The campaign was announced along with a video outlining the group’s aims (Picture: Animal Rebellion)

Branding the sector ‘cruel and destructive’, the group called for a transition to a ‘plant-based future’ away from meat, fishing and dairy. They also urged the Government to turn to rewilding projects to help the environment.

It comes after activists from the group ran onto the Mall during Trooping the Colour at the Jubilee, holding placards accusing the monarchy of having a ‘Royal disregard for all life’.

Then, at the Epsom Derby, protesters laid down on the race track with sashes saying ‘animal justice’.

The group have been behind a series of similar eye-catching stunts, including spraying a fishing organisation’s headquarters blood red earlier this year. 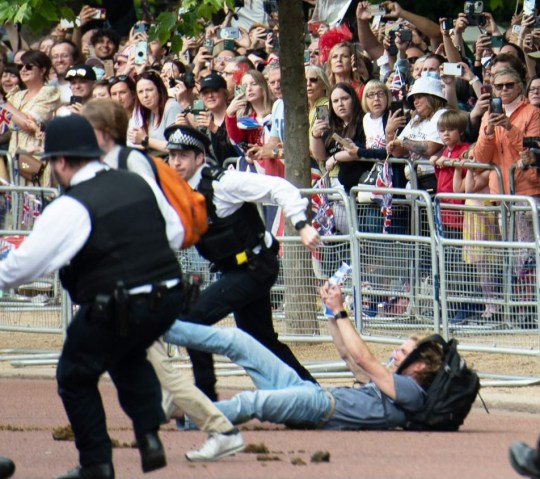 Protesters were arrested after running onto the Mall during the Jubilee (Picture: Story Picture Agency) 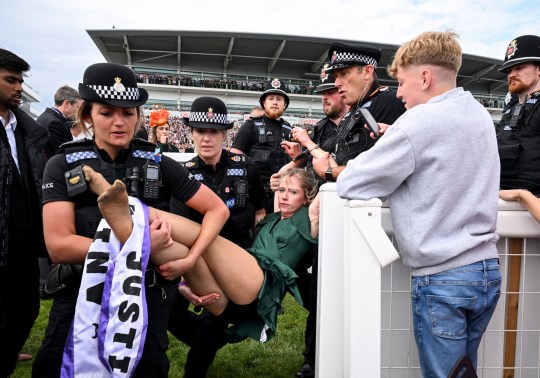 An animal rebellion activist is arrested after running onto the racecourse on day two of the Epsom Derby (Picture: Getty Images)

Speaking at the launch of their latest campaign, a spokesperson for the group, Emma de Saram, said: ‘Decades of climate research has shown that we are running out of time to secure a liveable future for everyone.

‘We are calling on our Government to urgently begin a transition to a plant-based food system where we would use significantly fewer natural resources, less energy, and less land.’