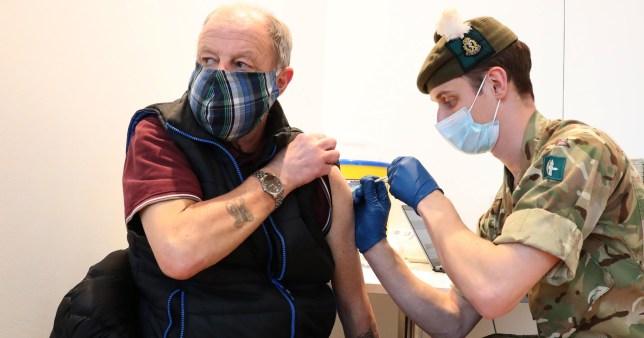 The UK’s vaccines minister is ‘confident’ every adult over 50 will be offered a jab by May.

It comes amid increasing confidence in Government that the UK is likely to meet its target of giving jabs to 15 million of the most vulnerable people by mid February.

Mr Zahawi said nearly 1,000 vaccines a minute were provided in an hour on Saturday morning. He told Sky News’ Sophy Ridge on Sunday: ‘The limiting factor is vaccine supply so the vaccine supply remains finite. I can tell you that yesterday between 11 and 12 o’clock we almost got to 1,000 jabs a minute, we got to 979 jabs a minute.

‘I’m confident we’ll meet our mid-February target of the top four cohorts, I’m also confident because I have enough line of sight of deliveries that are coming through, that we will also meet the one to nine cohorts by May.’

The ninth group in the UK’s priority list is all those over 50s. The top four groups include everyone over 70, health, social and care home workers and the clinically extremely vulnerable.

Health Secretary Matt Hancock has previously said he hopes to meet both targets.

Mr Zahawi added: ‘It’s a tough target by the way, many many people who are clinically extremely vulnerable have to be reached by GPs, some can’t travel.’

He also contradicted previous reports and said the UK is not looking at introducing vaccine passports, suggesting people could ask their GP to provide proof of their jab if required by other countries ahead of any future visit.

Asked if the UK is looking at introducing them, Mr Zahawi said: ‘No we’re not.

‘One, we don’t know the impact of the vaccines on transmission, two, it’d be discriminatory. I think the right thing to do is make sure people come forward and be vaccinated because they want to rather than it being made in some way mandatory through a passport.

‘If other countries require some form of proof then you can ask your GP – your GP will hold the record – and that will then be able to be used as your proof that you’ve had the vaccine.’

Labour’s Shadow Business Secretary Ed Miliband told the BBC’s Andrew Marr show that his party were ‘open’ to the idea of vaccine passports.

Asked if the pace of vaccines could slow down, Mr Zahawi said there was ‘no doubt’ it would vary.

Later asked when plans for quick Covid tests in workplaces with more than 50 employees will be rolled out, Mr Zahawi said: ‘We want it to become the norm that people when they go to work, once we are over this obviously lockdown, then they can be tested rapidly.

‘We’ve got the volumes, we’ve done a similar thing with local government and key workers. This is a really important point because vaccines are our way out of this pandemic but coupled with vaccines is test, trace and isolate.’